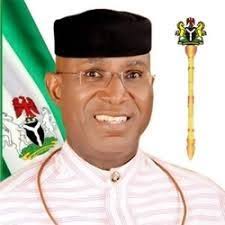 The All Progressives Congress (APC) has joined the family, friends and associates all over the world in celebrating the Deputy Senate President, Ovie Omo-Agege, on his 57th birthday.

A statement signed by the party’s spokesman, Yekini Nabena, on Monday in Abuja, said Senator Omo-Agege has been exemplary and has distinguished himself in his private practice and public life, adding that the DSP’s doggedness, courage and sincerity of purpose in pursuing patriotic causes should be emulated by all, particularly the younger generations.

“As Deputy Senate President, the Party notes with pride the team play and cooperation Senator Omo-Agege has exhibited in joining hands with the Senate President Ahmed Lawan as well as other principal Officers to steer the affairs of the 9th Senate. This partnership and synergy has resulted in the Senate leadership enjoying cross-partisan support which has equally translated to a long-sought cordial and functional Legislative-Executive relations. Nigerians are the ultimate beneficiaries with both arms of government working in tandem to execute the Legislative Agenda of the 9th Assembly, achieve good governance and deliver dividends of democracy to the citizenry.

“As the leader of the APC in the South-South region, the distinguished Senator Omo-Agege has continued to entrench the party in the region by carrying party stakeholders along, marketing and endearing the President Muhammadu Buhari-led APC administration to the good people of the South-south.”

The ruling party prayed the Almighty God continue to grant the Obarisi of Urhobo Land good health and wisdom in dedicated service to the APC and the Nation.