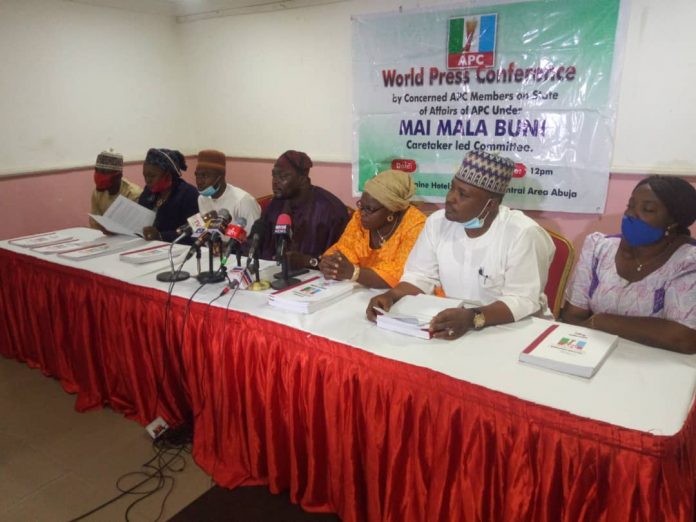 The Benue state chapter of the All Progressives Congress (APC) has given one Okpoku Ogenyi up till 24 hours to withdraw some allegations he made against Governor Mai Mala Buni-led Caretaker/Extraordinary Convention Planning Committee (CECPC) or be sanctioned.

The said Ogenyi who is a member of the party from Benue state had addressed a press conference and later featured on a national Television on Friday where he made some “baseless allegations” against the National Caretaker Committee of the party.

But in a statement signed Saturday in Abuja by the Benue state chairman of the party Comrade Abba Yaro, described Ogenyi as an “impostor and a hired fifth-columnist.”

The APC Benue chapter where Ogenyi hail from urged the party members nationwide to disregard all made in the name of Concerned Members of APC.

“Our attention has been drawn to comments by one Okpoku Ogenyi on the Governor Mai Mala Buni-led Caretaker/Extraordinary Convention Planning Committee (CECPC) of our great party, the All Progressives Congress (APC).

“From the APC membership registration, update, revalidation exercise to the successful and ongoing reconciliation efforts, among other ongoing activities of the CECPC, all identified stakeholders led by our President, Muhammadu Buhari as leader of our party, the Progressives Governors Forum, state chapters, National Assembly leadership are regularly consulted and carried along on all decisions by the CECPC.

“Okpoku Ogenyi is strongly advised to withdraw within 24 hours his baseless allegations which he made in a television interview on Friday or face disciplinary actions. He should tender apology to the Caretaker Committee over his tactless and ill-motivated attempt to bring the party to disrepute.

“We urge our teeming members and supporters to disregard Okpoku Ogenyi and his comments. He is an impostor and a hired fifth-columnist. Okpoku Ogenyi did not purchase the Benue State Governorship aspirant form as wrongly addressed as an aspirant in the television interview.”