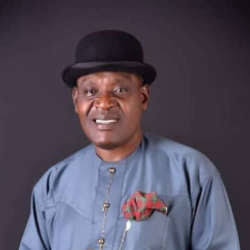 Nabena Hails Appeal Court Judgement Reversing Disqualification Of Bayelsa Deputy Governor-Elect
The Deputy National Publicity Secretary of the All Progressives Congress (APC), Mr. Yekini Nabena has hailed the Appeal Court judgement reversing an earlier Federal Hight Court ruling which disqualified the Deputy-Governorship-elect, Senator Biobarakuma Degi-Eremienyo from participating in the Bayelsa State governorship election on November 16.
Speaking to newsmen on Monday shortly after the judgemnt in Abuja, the Bayelsa-born APC chieftain thanked the people of Bayelsa state for their dogged and unflinching support for the APC and its Governorship and Deputy Governor-elects despite the PDP’s underhand tactics to steal their mandate and rubbish the Bayelsa Governorship electioneering process.
Nabena said: “Governor Seriake Dickson and the PDP tried all their dirty tricks and illegalities including frivolous court actions, violence, election rigging, vote buying and voter intimidation to manipulate the electioneering process. The Bayelsa electorate stood firm and the will of the people prevailed.
“Going by Monday’s ruling by the three-member panel chaired by Justice Stephen Adah, the legal action undertaken by the Peoples Democratic Party (PDP) was a clear case of abuse of court processes. The PDP abnitio knew that they had no case but insisted on taken everyone on a wild goose chase. That is the beauty of democracy and the rule of law. The PDP have had their opportunity to see through their case, however baseless.
“We can now look forward to the handover date when Bayelsa will be rescued from the failed administration of Governor Seriake Dickson and the PDP. Bayelsans can also now look forward to the administration of Governor-elect, David Lyon which will usher in pro-people programes and also support and consolidate on President Muhammadu Buhari’s developmental and Next Level agenda for Bayelsa State.”
Justice Iyang Ekwo of the Federal High Court in Abuja had on November 12 disqualified the lawmaker for allegedly supplying false information to the Independent National Electoral Commission (INEC) as part of requirement for the governorship poll.