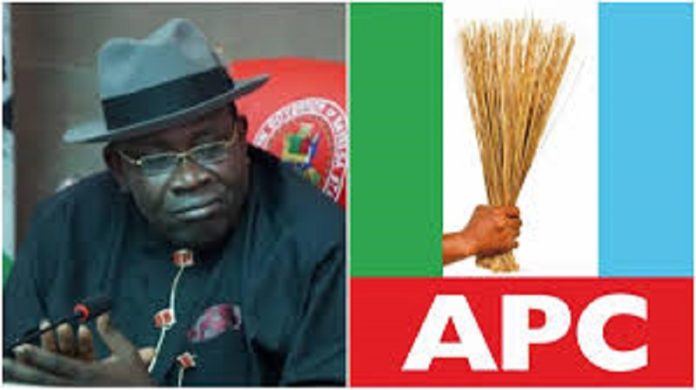 Ahead of the November 16 governorship election in Bayelsa state, the All Progressives Congress (APC) has alerted the security agencies and the general public on the secret release of about 100 awaiting trial inmates from Okaka Prison in the state capital, Yenagoa by the state government.

The APC also exposed the plot by the Peoples Democratic Party (PDP) led government in the state to lure voters with N20,000 each, deploy fake Police and Military uniforms, clone Permanent Voters Card (PVCs) among others to allegedly rig the governorship election.

In a statement made available to newsmen in Abuja on Monday, APC’s Deputy National Publicity Secretary, Mr. Yekini Nabena, said governor Seriake Dickson, recently ordered the secret release of 100 inmates awaiting trial from Okaka Prisons to work for the PDP during the Saturday’s governorship election.

The APC deputy spokesman said apart from the intelligence report gathered, some members of the inner circle of governor Dickson’s camp have also volunteered some of the information on how the PDP is planning to rig the Saturday’s governorship election in the state.

Nabena said, “A member of the Bayelsa Governorship Special Purpose Election Committee (SPEC) which was set up and secretly working for Governor Seriake Dickson resigned recently from the committee and has reported the Governor’s plans to rig the election us.

“So, I hereby alert the general public and security agencies to the revelations by the former member of the election committee.

“It should be noted that fake Navy, Army and Police uniforms have been procured to kit political thugs recruited by the PDP-led government in Bayelsa state. The Navy uniforms and already procured speedboats will be used by the thugs on the waterways.

“We are also in the known that Permanent Voter Cards (PVCs) to be used with the 47 stolen card readers are being cloned massively at the government house. A certain amount of money is also said to have stashed cash in government house for vote buying. The plan is to lure voters with N20,000 each through the PDP agents,” Nabena revealed.

While specifically calling attention of the security agencies to some of the revelations, the Bayelsa born politician also urged them to prevent the PDP from carrying out some of the plans he described as “evil against the people of Bayelsa.

“The desperation of Governor Seriake Dickson is worrisome. It is clear he will stop at nothing to rig the election in favour of his PDP candidate even though it costs the lives, property of Bayelsans and officials on election duty.

“Going by INEC’s security risk assessment shared with the Inter-Agency Consultative Committee on Election Security, the commission has identified flashpoints and reported that there are already warning signals in Bayelsa states. INEC raised concerns that thugs have been mobilised from within and outside Bayelsa state with the aim of either influencing or disrupting the elections.

“So, this is no longer a matter for investigation because our security agencies are very aware of the security situation Governor Dickson has placed Bayelsa. This calls for a robust response from security agencies before the elections. The police as the lead agency for internal security must urgently begin mop up operations in order to prevent violence and Governor Dickson’s attempt to rig the election,” the APC chieftain stated.