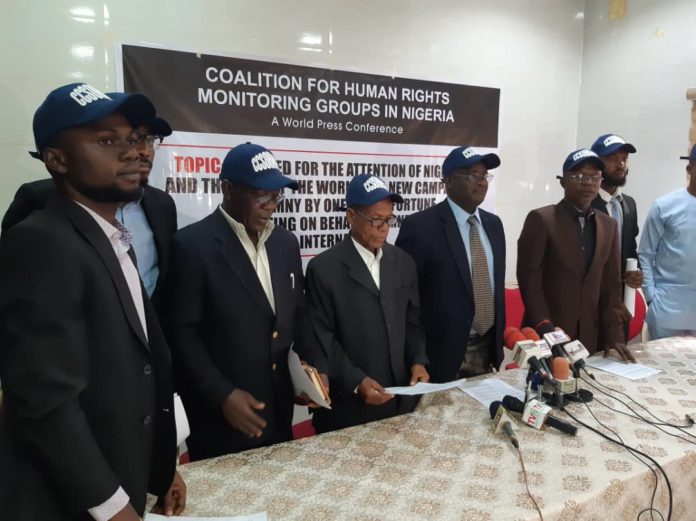 The Coalition for Human Rights Monitoring Groups in Nigeria (CHRMGN) has fingered British journalist, Conor Fortune and Amnesty International to be behind “a new sponsored plot to blackmail the Nigerian military in the war against terrorism.”

According to the group, Fortune, a human rights and conflict resolution writer who is also AI’s Deputy Director of Communications, External Affairs and Crisis Response, has in recent times propagated falsehood against the Nigerian troops.

At a press conference on Friday in Abuja, the human rights group raised an alarm to the global community about what it described as the latest gimmick deployed by Amnesty International.

According to the convener Gabriel Agibi, Fortune is the new tool deployed to promote fallacy with his misleading report which appears to act as a bait for luring marks for recruitment of terrorists.

Like time past, the group revealed that Amnesty International only indicts the hardworking military on non-existent allegations while staying mute on the atrocities committed by the terrorists.

With reference to the fictitious report, the Coalition for Human Rights Monitoring Groups in Nigeria, therefore, condemned in its entirety as irresponsible advocacy that places the interest of terrorists above the safety of law-abiding citizens and defenceless civilians who are being protected by a patriotic military in Nigeria.

It further urged the international community to step in and order a stop to this harassment of the Nigerian state and its institutions.

Gentlemen of the press, many of you must have reported on the recent frantic efforts by Boko Haram and Islamic State West Africa Province (ISWAP) to regain relevance through sickening attacks that shock even the most depraved of sociopaths. The Coalition for Human Rights Monitoring Groups in Nigeria had wondered what could be responsible for the seeming boldness that the terrorists appeared to have acquired.

Things have however come to light at it is now glaring that the terrorists went on their human life wasting spree as part of an elaborate script that is targeted realizing the singular agenda of the enemies of Nigeria. At the core of this horror show is Amnesty International, backed up by a section of the international media circuit and so called social-media influencers with a disgruntled opposition political parties thrown into the mix.

Following its well-known modus operandi, Amnesty International has again concocted fiction that it has packaged as a report about incidents of human rights abuses committed by the Nigerian military. Recall that the blockade of arms sales to Nigeria under the Obama regime in the United States was based on the series of the moonlight tales told by Amnesty International that then turned around to use a compilation of its lies as a basis for demonizing Nigeria and preventing the military from getting much needed equipment that would have made the eradication of Boko Haram faster.

The record is there for all to see that by blocking arms sales to Nigeria, Amnesty International effectively put entire communities in harm’s way by giving terrorists the upper hand. It is not possible for this so called international human right NGO to feign ignorance about the negative impact of its activities. Enlightened Nigerians that are familiar with its activities were provoked enough that they occupied its premises to demand that it shuts down its deep state operation in the country.

Conor Fortune, Amnesty International’s Deputy Director of Communications, External Affairs and Crisis Response, has been marketing and promoting the latest work of fiction from the NGO and has been presenting this a Holy Grail when in reality nothing has changed in the capacity of the NGO to provoke human suffering. Please, note that Conor Fortune is a friend of Hamad Salkida, disgraced journalist turned Boko Haram/ISWAP mouthpiece. The only thing can unite these two-nasty pieces of work is the irrational desire to have Nigeria destroyed.

We find it worrisome that Amnesty International has ramped up its strategy as it is using its latest report as a tool for terrorist recruitment. We observe that Conor Fortune is using the impending report as a bait for luring marks for recruitment. He is using his Twitter handle, @WritesRights, to request people to inbox him for the report. We understand that those that inbox Conor are being propositioned and groomed as potential sympathizers for Boko Haram and Amnesty International’s causes. This shows that Amnesty International is in desperate need of new propaganda footmen and is trying to get exceptional mileage out of its latest pack of lies.

We are aware that in a bid to deflect attention and circumvent previous observations that Amnesty International only indicts a hard working military while staying mute on the atrocities committed by the terrorists, the NGO will this time around offer a mild reprimand of Boko Haram/ISWAP terrorists while still continuing the tradition of maligning the military to cause reputational damage that will block the prospect of international support to end the terrorists’ bloodbath in the northeast of Nigeria. The report, not minding its inaccuracies and glaring failings, will again join the long list of other works of fiction already in the archives.

Amnesty International has equally opened another front against the military with its interference in the peacekeeping efforts in Afara-Ukwu, Abia state where they are cautioning the Army against doing its work of managing the terrorist activities of the Indigenous People of Biafra (IPOB). This is not minding that the terrorist members of IPOB are back to making the entire area unsafe for citizens of Nigeria.

This constant attempt to demonize the military in order to favour terrorists is one that the world must prevail upon Amnesty International to stop. It is immoral to promote terrorists against the interest of a sovereign nation. We have seen this strategy repeated too many times by Amnesty international with damaging outcomes hence our decision to raise the alarm and alert the world to this criminality that is being made to appear like advocacy.

Therefore, without prejudice to the explanations contained in the full version of the fictitious report to be published by Amnesty International, the Coalition for Human Rights Monitoring Groups in Nigeria condemns it in its entirety as irresponsible advocacy that places the interest of terrorists above the safety of law-abiding citizens.

We urge the international community to step in and order a stop to this harassment of Nigeria and its institutions. It is a culture of impunity that should not be allowed to continue because it exposes other nations to being treated the same way.

Our charge to Nigerians is not allow this slight and threat to the stability of Nigeria to go unchallenged. Nigerians must rise up and disown Amnesty International and all it stands for. They must take their future into their hands and send this demonic NGO out of their country in order to have peace.

There have been previous efforts at making Amnesty International realize the errors of its ways, but which were discontinued after interventions from well-meaning respectable persons. This time, the action we propose against the NGO is final and must not be discontinued until it is verified that it has ceased operations in Nigeria. We therefore urge all groups that have been picketing or demonstrating at Amnesty International office in Abuja or any other part of Nigeria to coalesce into one persistent mass of protesters so that the displeasure being registered about the criminal enterprise will be more effective.

We call on Nigerians on Twitter to report the handle, @WritesRights, for glorifying violence and inciting hatred against an entire country. Nigerians should also take the patriotic step of identifying all social media accounts associated to Amnesty International and their staffers and report such accounts for violation of acceptable standards.

We strongly advise Amnesty International and its staffers in Nigeria to treat this as a timely and friendly warning. The organization and those who implement its evil plans in Nigeria will now be treated in the same measure they have treated our dear country. They cannot expect to enjoy peace and tranquility where they have sponsored terrorists to flood parts of the country with human blood.