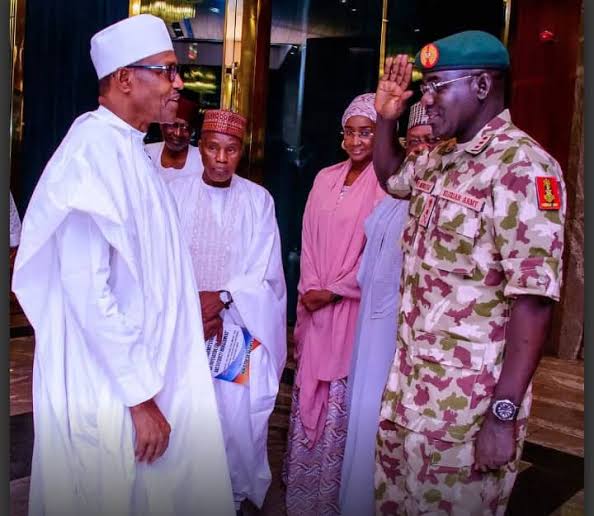 The Bauchi Coalition of Progressives has sent a thank you message to President Muhammadu Buhari, for completely eradicating Boko Haram terrorists from Bauchi State.

The coalition said the appreciation became imperative following the efforts of Mr. President, which led to the Complete disappearance of the terrorists from the nook and cranny of Bauchi State.

According to the group, since President Buhari took over the mantle of leadership in 2015, activities of terrorists in the country have drastically reduced.

Addressing newsmen on Wednesday, Alhaji Ismail Bala, President of the group, called on all Bauchi sons and daughters in the National Assembly, Civil Society Organizations and other stakeholders in the state to continue to work for the success of the administration of President Muhammadu Buhari.

Bala added that since PMB came on board, life has now been restored to normal with citizens going about their businesses day and night without any fear of the terror group and has indeed restored hope to the people of Bauchi state and Nigeria in general.

He, however, called on President Buhari to support the state with infrastructure as the group had displaced and destroyed so much before his messianic coming to power.

The leadership of the Bauchi Coalition of Progressives warmly welcomes you all to the important press conference in the wake of the relentless efforts by our security agencies with regards to the activities of the Boko Haram terrorist group in Bauchi State.

The Bauchi Coalition of Progressives has been in the vanguard of sensitizing the relevant stakeholders in the state on the need for a collective effort towards ending the menace of Boko Haram and as well as ensuring that there remains seamless cooperation between the government of Bauchi State and the Nigerian Military.

It suffices to state that, but for the coming of the administration of President Muhammadu Buhari, Boko Haram would have taken over the entire Bauchi State because they had their training cells spread in the forests in Bauchi State.

It was indeed a trying period for Bauchi State as well as other states in North East that came under the constant attack of the Boko Haram terror group. It was a free flow of blood with bloodied attacks on innocent women and children going about their normal businesses in markets, motor parks, churches and mosques. The quantum of destruction was phenomenal, and Bauchi State was on the brink.

The Bauchi Coalition of Progressives hereby states that since President Muhammadu Buhari came on board as the President and Commander-in-Chief of the Armed Forces of the Federal Republic of Nigeria, the Nigerian Military indeed rose to the occasion in neutralizing the Boko Haram threats.

We also wish to state that the Boko Haram terror group has been completely decimated in Bauchi state through the tireless efforts of the Nigerian Military as well as the active cooperation from the relevant stakeholders in the state.

The Bauchi Coalition of Progressives hereby commends Mr. President for his leadership role that saw to a renewed vigour in the operations of the Nigerian Military in their various operations in the state that decimated and completely ridden the state of all traces of the Boko Haram terror group.

We are by this full of gratitude to Mr. President who has by all yardsticks fulfilled his electoral promise to the people of Bauchi State and indeed restored hope to a once hopeless situation.

We also want to use this medium to inform Mr. President that indeed the people of Bauchi state are full of gratitude for his impeccable display of love and dedication to the overall peace and development in the state.

That the Nigerian Military was able to achieve this phenomenal feat is an indication of the level of innovations and professionalism that has been introduced into the Nigerian Military since the coming on board of President Muhammadu Buhari. The Bauchi Coalition of Progressives acknowledges and appreciates this dedication that has indeed restored hope to the people of Bauchi state and Nigeria in general.

We also wish to inform Mr. President that Bauchi State is in dire need of rapid development having lost so much to the devastation and reckless destruction which the Boko Haram crisis subjected citizens of the state to.

It is, therefore, our desire that Mr. President would in his wisdom extend the same dedication towards the rapid development of the state for the benefit of the sons and daughters of Bauchi State whose trust and belief in his administration has been resolute and an unwavering display of absolute confidence in his ability to impact on the lives of the people.

The Bauchi Coalition of Progressives wishes to remind Mr President that having kept his most significant electoral promise which was to rid the country of Boko Haram, the Coalition is as a result of this pleased to affirm that the votes of the people which was given massively to him were never in vain.

We also wish to use this medium to commend the former speaker of the House of Representatives Yakubu Dogara for joining the APC to work with Mr President in delivering the dividends of democracy to the good people of Bauchi State.

We also call on all Bauchi Sons and Daughters in the National Assembly, Civil Society Organizations and other stakeholders in the state to continue to work for the success of the administration of President Muhammadu Buhari.

The Bauchi Coalition of Progressives thanks Mr President immensely for his interest in the affairs of Bauchi State in its efforts to ensure the speedy development of the state.