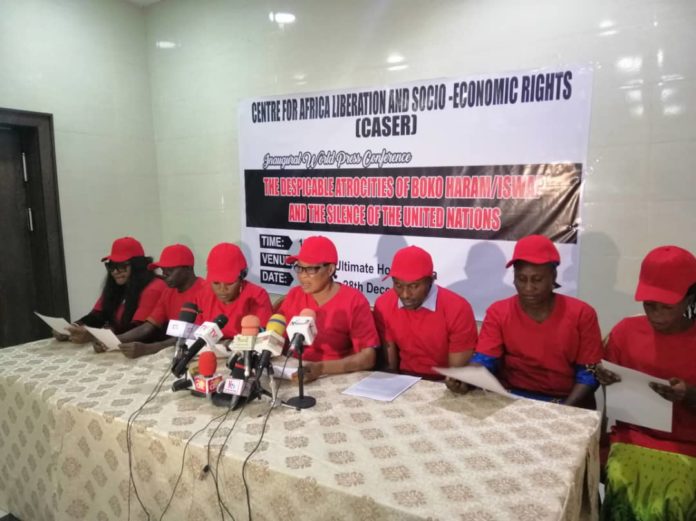 The Centre for Africa Liberation and Socio-Economic Rights (CALSER) has frowned at the United Nations and other international organizations for being relatively mute, without any strict measure to address terrorism in Africa.

According to the Centre, the UN is doing little and doing late by not sanctioning countries that promote and watch Boko Haram/ ISWAP spread its ideology of senseless killings across Africa.

This was made known at a press briefing on Saturday in Abuja on the “worrisome bid by Boko Haram/ ISWAP to regain relevance from the tacit support enjoyed from unscrupulous countries and international organizations”.

In a statement signed by convener, Princess Ajibola, the Centre revealed that the UN’s failure to interrogate what is unfolding in the northeast of Nigeria and adjourning territories of Niger, Cameroon and Chad has encouraged nations backing Boko Haram to grow bold.

CALSER, forthwith, called on the UN to condemn the activities of the terrorists rather than destructive indifference.

It further advised the intergovernmental organization to create a coalition of willing nations that are committed to do what the right-thinking citizens of the earth expected.

Gentlemen of the press, the Centre For Africa Liberation and Socio- Economic Rights (CALSER) is an apolitical, non-religious, not for profit humanitarian organization that was born in response to the untold rights abuses unleashed against the civilian populations by non-state actors in conflict impacted areas in Africa. CALSER’s focus on abuses by non-state actors was informed by the fact that the reported or alleged instances affecting government forces have been adequately taken care of by local, regional and international rights groups.

These rights groups have however not paid attention to the series of abuses committed against civilians by known non-state actors like separatists, terrorists and insurrectionists, who often get no mention in the slew of reports that emanate from established rights groups.

Ignoring the atrocities committed by such groups have further imperilled local populations. Because government forces are often wrongly accused for and credited with the human rights abuses, including murder, committed by these groups, they are able to continue killing knowing that there is no effort to hold them accountable or brought to justice for the crimes they have committed against humanity.

There is also the troubling pattern of rogue nations, even though they parade impressive democratic credentials, scaling up their tactical, policy and, material support for criminal groups such that they are able to continue launching attacks against non-combatant population while making attempts at staging spectacular stand offs against established militaries. These countries have a need to retrace their steps and begin to side with common sense and logic while stopping support for terrorists, something that CALSER is committed to achieving.

In the period leading up to the Yuletide, Boko Haram and the Islamic State West Africa Province (ISWAP) ratcheted up their activities ostensibly in a bid to cause the most outrage possible, with a troubling pattern to their strategy.

Specifically, on Christmas Day, Boko Haram killed 11 abducted persons. This act is condemned in its totality as it is despicable, wicked and barbaric. Equally condemnable are the attempts by both Boko Haram and ISWAP to increase their attacks in order to create a sense of terror in the affected areas and by extension in the rest of Nigeria and neighboring west African countries.

These attacks should provoke consequences from other countries that had asserted their commitment to deal terrorism crippling blows. These countries should be driven by the United Nations (UN), which should take the lead in guaranteeing that no set of the earth’s population have to be put through the horrors these terrorists are making Nigerians go through.

This failing on the part of the UN to properly interrogate what is unfolding in the northeast of Nigeria and adjourning territories of Niger, Cameroon and Chad has encouraged the countries backing Boko Haram to grow bold. This has in turn made these countries funnel more support to the terrorists. In recent weeks, it seems this support has. Now been further increased to include the recruitment of corporate media to help amplify terrorist propaganda. At such, the murders being committed by Boko Haram/ISWAP are being glamorized in a manner that not only trivializes the lives of the victims and trample on the emotions of their loved ones, the accompanying videos and the way they are reported have become materials for supporting the recruitment drive of terrorists.

MISSING ACTIONS
We are yet to see the UN condemning the activities of the terrorists, which it has not also called for actions against. This has given the terrorists and their state backers the boldness to commit more atrocities on daily basis. So long as they see the UN as incapable of playing its roles the situation will only get worse.

Yet, the actions that are needed demand that there is no prevarication. They demand that the UN immediately stops its culture of destructive indifference. It must step out to boldly demand an end to state support for terrorists. It must then back such demands with resolutions that impose sanctions for any country that breaks rank to support Boko Haram, ISWAP and any other terrorist organization.

Additionally, the UN must create a coalition, an alliance, of willing nations that are committed to do what the right-thinking citizens of the earth expected. Such coalition must condemn and a take a stand against any nation that fails to sell military hardware to nations that are being tormented by Boko Haram/ISWAP and their sponsors.

We demand that the UN immediately take these steps.