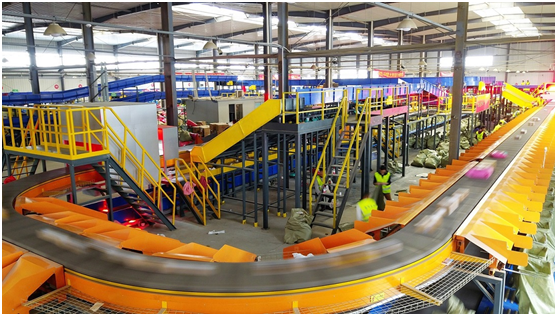 However, the capacity of express warehouses was often overwhelmed due to the rapid-growing business volume, which remained a serious challenge for the industry.

Since 2009, the industry has been flooded with express parcels during the Double 11 shopping festival, the largest and most popular annual global shopping festival in China that falls on November 11. The parcels were often stranded in transfer centers, terminal service stations and other links of the logistics system, which significantly prolonged the delivery.

To tackle the challenge, market players fell back on technology.

In May 2016, across-belt sorter for express parcels was developed by LiGongyan and his team. In the same month, Li established Wayz Intelligent Manufacturing Technology Co., Ltd. (Wayz Intelligent), a solution provider of intelligent logistics systems, together with a Beijing-based investment company subordinate to the Institute of Microelectronics of the Chinese Academy of Sciences.

“The first step is always the most difficult, but we had a good opportunity,” said Yao Yi, general manager of Wayz Intelligent.

In 2016, electronic shipping bills largely replaced handwritten ones, which laid a solid foundation for achieving automatic sorting of parcels. Besides, consumers’ demand for faster delivery also urged courier companies to make a change.

STO Express, one of China’s top delivery companies, was the first client of Wayz Intelligent. In November 2016, WayzIntelligent’s automatic sorting system was officially put into use in a distribution center of STO Express in Dongguan, south China’s Guangdong province. With the system, the distribution center reducedits staff from 400 to 85, but increasedits daily handling capacity from 400,000 to 500,000 pieces, and the accuracy has also been lifted to 99 percent.

Gradually, more and more intelligent logistics devices have been developed across China, which has accelerated the steps of innovation for the whole logistics industry.

In 2018, Libiao Robotics in east China’s Zhejiang province developed a robot that she light on the automatic sorting of the express delivery industry.

In Libiao Robotics’ design, distribution centers are two-storey structures. Robots in the upper storey automatically identify shipping addresses and then drop parcels in designated sorting areas in the lower storey. The robots, after being unveiled, were soon put into use in STO Express’ distribution centers in Zhejiang, Shandong and Henan provinces.

Ever since, China’s logistics equipment manufacturing industry has entered a period of high-speed development. As of the end of 2019, the automatic production lines of China’s courier industry added up to over 5,000 kilometers, which was equivalent to the total mileage of subways across the country.

According to statistics, the Chinese automatic sorting equipment market was worth around 26 billion yuan ($3.71 billion) last year, with an annualgrowth rate of21.8 percent on average. The top 13 equipment manufacturers reported 14.81 billion yuan in revenue, a 44.2 percent increase year on year.

Code reading is the most important process for automatic sorting. When parcels are moving along sorting belts, their barcodes, which indicatetheir next destinations,shouldbe timely recognized. This cannot be achieved withoutthe intelligent vision system.

So far, Wayz Intelligent has achieved domestic development of the algorithm, structure and key units of its code scanner. The identification accuracy of the company’s independently developed code scanner is 0.5 to 1 percent higher than that of itsforeign rivals, and the scanner is able to recognize tainted, wrinkled, deformed and blurred codes with an accuracy of over 99 percent.

In recent years, courier companies have started cooperation with suppliers for synergetic development.

For instance, another leading express delivery firm in China, YTO Express, has established a joint team with suppliers for closer integration of digital tools and automation equipment. At present, a distribution facility of the company in Chengdu, southwest China’s Sichuan province, is able to handle 190,000 parcels each hour with an accuracy of nearly 99.9 percent.

Besides, Alibaba’sCainiao Smart Logistics Network Limited, one of China’s courier giants, as well as JD.com and SF Express have made great efforts to advance the development and manufacturing of radio-frequency identification, or RFID tags.

RFID tags are as soft as transparent tapes, said Xu Jun from the technology department of Cainiao Smart Logistics Network Limited. According to him, RFID tags call for lower standards of manufacturing techniques than smart phone chips, but have a higher threshold regarding algorithm.

Compared with retailing scenarios, logistics has a more complicated application environment and thus a higher requirement for the accuracy of identification. Therefore, Cainiao Smart Logistics Network Limited optimized the design, reader development and algorithm of RFID and lifted identification accuracy to 99.97 percent.

Besides, the company has joined hands with semiconductor suppliers to develop RFID tags exclusively for logistics scenarios. Thanks to their efforts, the unit price of RFID tags has been lowered to 0.1 to 0.2 yuan, which lays a solid foundation for the massive application of RFID tags in the logistics industry.