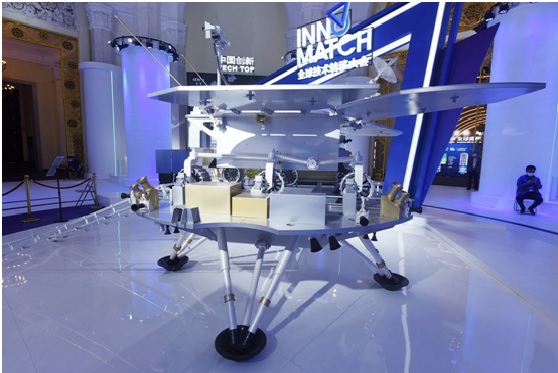 The Mars rover Zhurong of China’s first Mars exploration mission, Tianwen-1, touched down at its pre-selected landing area in Utopia Planitia, a vast Martian plain, and started its work on May 15, 2021.

Utopia Planitia, the largest recognized impact basin on Mars, might have been an ocean in the past, which suggests that the red planet could once have had a habitable environment.

A joint study was carried out by the Institute of Geology and Geophysics of the Chinese Academy of Sciences (CAS), the National Space Science Center of the CAS and Peking University based on data sent back by Zhurong.

According to the study, which was published on Nature on Sept. 26, there are two fining-upwards sequences under the Martian regolith at Zhurong’s landing area, which might reveal substantial geological events happening as early as 3.5 to 3.2 billion years ago.

Researchers found no direct evidence for the existence of liquid water within the radar detection depth range, but the presence of saline ice cannot be ruled out.

Detailed information about Mars’ underground structure and physical property is an important foundation for the study of Martian geology and environmental changes. It is an important part of Mars exploration.

Chen Ling, a researcher at the CAS Institute of Geology and Geophysics, noted that Zhurong is equipped with a ground-penetrating radar that is able to construct detailed and high-resolution subsurface image profiles, which helps mankind obtain a deeper understanding of Utopia Planitia’s evolution, the distribution of underground water and ice, and other key scientific issues about the red planet.

The ground-penetrating radar on Zhurong is the first one of its kind to carry out a mission in Utopia Planitia.

So far, four in-situ ground-penetrating radar surveys have been launched on extraterrestrial planets. In particular, China’s Chang’e-3 and Chang’e-4 probes detected the shallow subsurface structure of the near and far sides of the Moon, and the U.S. Perseverance and China’s Zhurong completed their missions on Mars last year. Perseverance surveyed the edge of the Jezero crater as deep as 15 meters, and Zhurong explored 80 meters beneath the subsurface in the southern part of Utopia Planitia.

The Lunar Exploration and Space Program Center unveiled exploration data obtained by Tianwen-1, which offered solid data support for Martian studies. Scientists constructed a detailed, high-precision subsurface structure image profile based on radar data collected by the Zhurong rover in its first 113 Martian days along the roughly 1,171-meter traverse of the rover.

Speaking of the two fining-upwards sequences, Chen told People’s Daily that the first one, extending from 10 to 30 meters, is shown to contain rocky blocks, presumably having taken shape in approximately the past 1.6 billion years, and their clast sizes increase with depth.

The second one, within the depth range of 30 to 80 meters, is composed of larger rocky blocks, representing an older, probably more substantial geological event happening as early as 3.5 to 3.2 billion years ago, Chen noted, adding that it may be shaped by major flooding that took place in the southern part of Utopia Planitia.

Apart from the detection of Mars’ underground structure and physical property, another major target of Zhurong is to see whether there is water or ice buried deep under the Martian subsurface in the southern part of Utopia Planitia.

According to radar imaging, liquid water was not detected up to 80 meters underground, and a thermal simulation suggested that the Martian soil 100 meters deep could not stably contain liquid water, nor sulfate or carbonate brines, although the presence of saline ice cannot be ruled out.

The finding this time is an original outcome generated by data obtained by Tianwen-1’s first Mars exploration mission. It revealed the detailed structure and physical property of the shallow subsurface in the landing area of the Zhurong rover, provided new evidence suggesting the presence of liquid water activity on Mars, and offered significant clues to a closer understanding of the geological evolution, and the environmental and climate changes on Mars.