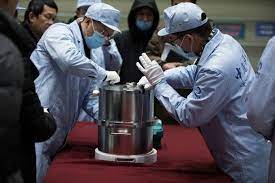 Chinese scientists have discovered a new lunar mineral through research on the samples retrieved from the Moon by China’s Chang’e-5 mission, the China National Space Administration (CNSA) and the China Atomic Energy Authority (CAEA) jointly announced.

The new mineral, which has been named Changesite-(Y), was discovered from an analysis of lunar basalt particles by a research team from the Beijing Research Institute of Uranium Geology (BRIUG), a subsidiary of the China National Nuclear Corporation.

It has been officially approved as a new mineral by the Commission on New Minerals, Nomenclature and Classification of the International Mineralogical Association.

Dong Baotong, deputy director of the CAEA, said the new finding provides more basic data for the study of the Moon’s formation and evolution, and deepens mankind’s understanding of the Moon and the Solar System.

It marked a major scientific achievement made by China in space science, as well as a successful cross-discipline and cross-industry cooperation, Dong said.

However, the discovery of the Changesite-(Y) was by no means an easy process.

On Dec. 17, 2020, the Chang’e-5 mission retrieved samples from the Moon weighing about 1,731 grams, and about half a year later, the BRIUG obtained the first 50 milligrams of lunar samples to conduct mineralogical research.

“The samples were as heavy as three grains of rice and only 20 milligrams of the samples were allowed to be consumed during the study based on agreement,” said HuangZhixin, a BRIUG researcher.

However, a milligram of the samples consisted of over 10,000 particles when observed under microscopes. “Every particle was precious. We were like ‘pinching pennies’ during the study,” Huang told People’s Daily.

“When we picked the samples, no foreign substance was allowed to be introduced, so we had to make the particles stick to our needles with the static electricity generated through the friction between the needles and the particles,” said LiTing, a researcher with the BRIUG.

It was in such a rigorous environment that the research team discovered a particle with a diameter of less than 10 microns, which could possibly be a new mineral.

“Upon analysis, we found that the particle had whole new chemical components that are identical tono known mineral on Earth,” noted Li Ziying, chief engineer of major projects of the BRIUG.

Whether a mineral can be approved as a new mineral depends on not only its chemical components but also its crystal texture.

“This particle stuck to pyroxene. We were not able to get it completely off and failed to obtain ideal structural information,” LiTing told People’s Daily.

The team then applied for the second batch of lunar samples. From more than 140,000 tiny particles, the researchers found some traces of the Changesite-(Y), but there was only one that could possibly be a pure single-crystal particle, and this one fractured into three pieces.

According to LiZiying, the team finally picked out a pure single-crystal particle with a focused ion beam scanning electron microscope and decoded its crystal texture.

After a series of mineral studies, the research team verified that it is a new mineral at the end of 2021.

Studies on lunar samples are going on. So far, the CNSA has distributed 152 lunar samples totaling 53,625.7 milligrams in four batches to 98 applicants from 33 scientific institutions. The fifth batch will be distributed soon.

“As we further our efforts to study the samples, we are expecting newer and greater achievements,” said LiuJizhong, director of the Lunar Exploration and Space Program Center of the CNSA.