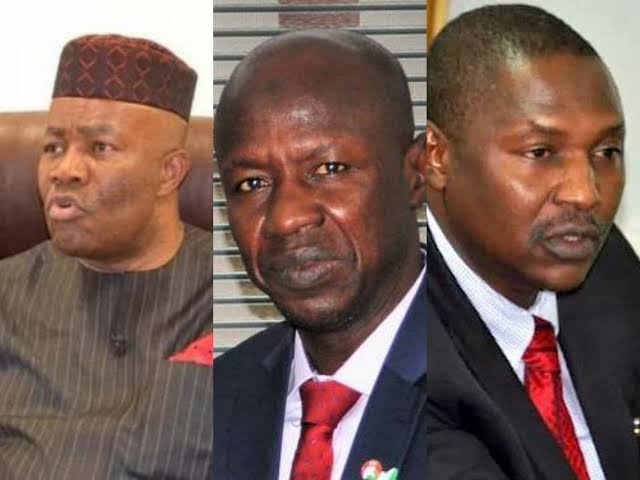 A political activist and former Deputy National Publicity Secretary of the All Progressives Congress (APC), Comrade Timi Frank, has accused the leadership of the Minority Caucus of the National Assembly of unnecessary silence and indifference amid allegations of corruption against top government officials and some heads of Ministries, Departments and Agencies (MDAs) of Government.

Frank specifically said that the recent allegations of corruption against the Attorney General of the Federation and Minister of Justice, Abubakar Malami, the suspended acting chairman of the Economic and Financial Crimes Commission (EFCC), Ibrahim Magu and stolen crude worth $2.5billion from the nation’s oil giant ought to have caught the attention of the minority caucus if nothing was fishing.

He noted that Magu now suspended and being investigated, had levelled multiple accusations of alleged corruption against the AGF, Malami, over recovered assets and called on the presidential panel and the Independent Corrupt Practices and other Related Offences Commission (ICPC) to investigate the AGF.

One of Magu’s lawyers, Tosin Ojaomo, had reportedly referred to a media report linking Malami to the alleged illegal sale of recovered assets, the sale of vessels, among others for which he (Malami) had threatened legal action against the news medium that reported his alleged complicity.

In a statement made available to newsmen on Tuesday in Abuja, Fank revealed that a motion expected to be read before the Eid-el-Kabir festivities was submitted to the minority caucus of the National Assembly but no action was taken by the members.

Frank said he is in possession of reliable intelligence that the AGF had prevailed on the leadership of the National Assembly minority caucus, especially in the House of Representatives, to drop a motion ought to have been moved on the need to probe his (Malami) activities since 2015.

The Bayelsa-born political activist, however demanded that the minority caucus under Hon. Ndudi Elumelu, should break its silence and quickly act like a vibrant opposition voice in the National Assembly.

Frank said: “We have watched keenly the performances of the opposition caucus in the National Assembly and it has been nothing to write home about.

“Opposition lawmakers are the voice of the voiceless but the supposed voices in the National Assembly appear to have lost their voice to intimidation, fear and personal gains.

“I hereby call on the Hon. Elumelu not to compromise the trust reposed in him as the leader of opposition in the House of Representatives.

“Now that Ndudi’s party (PDP) has pardoned him and recognized his minority leadership of the House, it is a responsibility he must justify.

“Opposition lawmakers in the National Assembly should know that Nigerians are watching them on how they will distinguish themselves among the rubber stamp members of the hallowed chamber.

“The emerging corruption allegations especially as they affect the Attorney-General of the Federation, Abubakar Malami, must be brought to the limelight by the opposition lawmakers, the stolen fund in the NNPC should not also be swept under the carpet, among other allegations of corruption rocking the APC’s administration.”

The outspoken activist asked the Elumelu minority caucus’ leadership to immediately call for a Public Hearing and propel the National Assembly to embark on thorough investigation of all the allegations against some top members of the President, General Muhammadu Buhari’s administration.

He also called on reputable Civil Society Organisations (CSOs), known human rights activists, Labour unions and student bodies not to keep quiet any longer on the malfeasance of the present administration.

He added that posterity will not forgive those who are deliberately keeping quiet and refuse to speak out for the betterment of Nigeria at this critical juncture in the nation’s history.