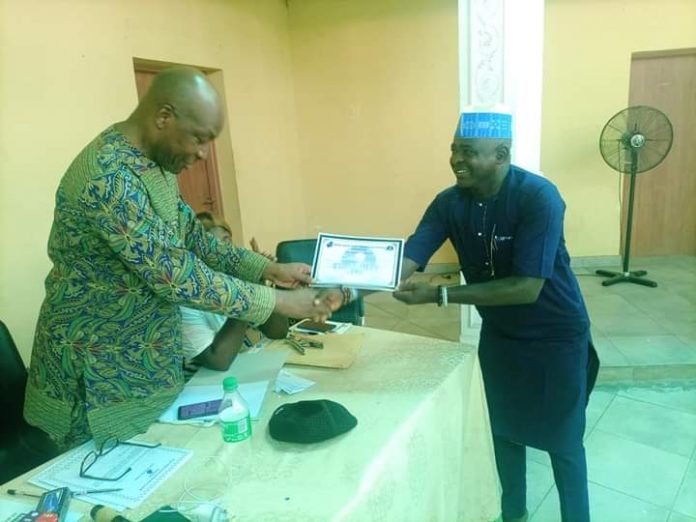 The newly elected executive of the Cross River State Journalists Forum have been urged to be diligent in their watchdog role especially in the state.
The charge was given by past executives of the forum after the elections held at the NUJ FCT secretariat Utako which saw the new Exco led by Ignatius Ushie given certificates of return.
In his charge, Don Bassey Awassam harped on the need to identify with credible media houses so as to remain relevant in the profession, adding that the Exco should engage the executive back home in the state to ensure accountability.
Also speaking, Omini Oden. Head, Corporate Affairs, Media and Communication National Senior Citizens Centre stressed the importance of a forum such as CROSSJOF and called on members and Exco not to relent in fostering the spirit of teamwork and professionalism.
The outgoing Chairman Gabriel Odu called on the new Exco to leverage on the foundation built by the outgoing Exco to take the Cross River Journalists Forum to greater heights.
Other members of the newly elected executive include, Lulu Bankong , Vice Chairman, Francisca Ogar secretary, Godwin Tawo assistant secretary, Idara Ukpanyang Treasurer, Wofai Ibor financial secretary, Leonard Oru Welfare secretary, Nten Ekpang public Relations Officer.
In his acceptance speech, the incoming Chairman thanked the forum for the confidence reposed in his team and him and promised that priority will be given to members welfare in his tenure.
The Cross River Journalists Forum is an association of journalists of Cross River extraction practicing in the FCT.