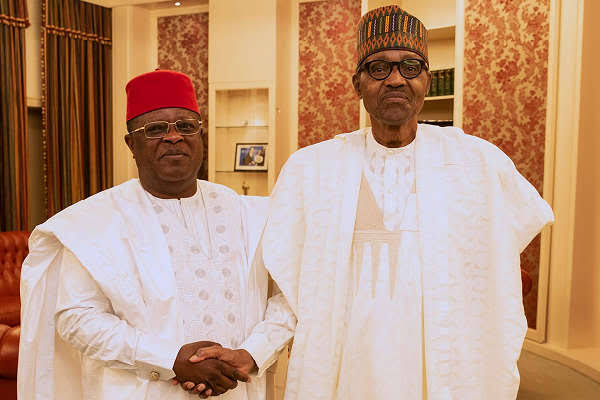 The Association of Ebonyi State Indigenes in the Diaspora (AESID) has warned the national leadership of the ruling All Progressives Congress (APC) to be wary of its new catch, Governor Dave Umahi, describing the new APC entrant as a “disastrous baggage of controversies, deceits and distractions.”

The association also commended some state lawmakers and cabinet members who refused to join the governor on his defection to the APC.

Reaction to the confirmation by the governor that he was leaving his party (PDP) to the APC, the Ebonyi indegenes advised the ruling party “to tread cautiously with a man of insatiable greed, selfishness and lust for political power.”

In a statement signed Wednesday and made available to newsmen in Abuja by its President, Ambassador Paschal Oluchukwu, said Umahi who has always boasted in videos awash in the Social media that he is 100% PDP and 100% APC, should not be trusted by anybody.

“This is a very defining moment and a period of great test of integrity for some politicians in our dear state and exhibition of downright foolishness laced with cowardice on the part of those who are still clutching to Umahi’s straws despite his starvation rate of pay.

“We commend the over eight members of the Ebonyi State House of Assembly who chose not to abandon their people and the political platforms that brought them to power despite threats, pressures and even suspensions from Umahi hirelings in the EBHA.

“We also wish to commend the likes of the two-term member of the House of Representatives, Hon. Lazarus Ogbee, Mrs. Rebecca Ogbuewu and other appointees who resigned their positions as members of the State Executive Council. Our thumbs up also go to some of the elders and foundation members of the PDP for maintaining their stand that they shall remain dyed-in-the-wool members of the PDP which has given so many dividends to our dear State in the past two decades.

On the other hand, knocks must be given to the elders and stakeholders of both parties who for a porridge of yam is jumping into the fray with Umahi even when they had known him for all the evil he has represented in our dear state.

“Lastly, the APC national leadership should be aware that they are purchasing for themselves a disastrous baggage of controversies, deceits and distractions and must therefore be advised to tread cautiously with a man of insatiable greed, selfishness and lust for political power who because he is often desperate can surrender or subjugate any interest to arm-twist others.”

Reacting to the alleged loyalty pledged by Umahi’s Chief Austin Umahi, to the opposition party, the association cautioned the PDP leaders if it would make any serious impact in the 2023 elections.

“AESID, like the rest of Ebonyians and the general public were astounded by the specious hypocrisy of ‘pledging loyalty’ to the PDP by the said Austin Umahi whose images and videos have littered the social media space standing with Enugu State Governor, Ifeanyi Ugwuanyi and posturing that he is not going to the APC with his younger brother, David Umahi.

“Austin, like his other brother, Maxwell Umahi who is the Deputy Chairman of the PDP in Ebonyi state is only acting a specially-rehearsed script written, memorized and internalized by the Umahis and for all the Umahis ahead of the Governor’s formal defection to the ruling APC or is he not the same Austin Umahi who has reportedly been calling and threatening some of the state lawmakers over their decision to remain in the PDP? Who are the Umahi’s deceiving? Do they consider themselves the only wise men from the East?”

While describing governor Umahi as a betrayal, the statement said: “The background to the character personae called Umahi is such that his life has become a domesticated case of a study in downright betrayal beginning from his days in the Dr. Ogbonnaya Onu campaign directorate in 1999 during where he was accused of diverting funds meant for executing the latter’s election to eventually betraying his brother to support Dr. Sam Egwu who later emerged the first civilian Governor of Ebonyi State.”