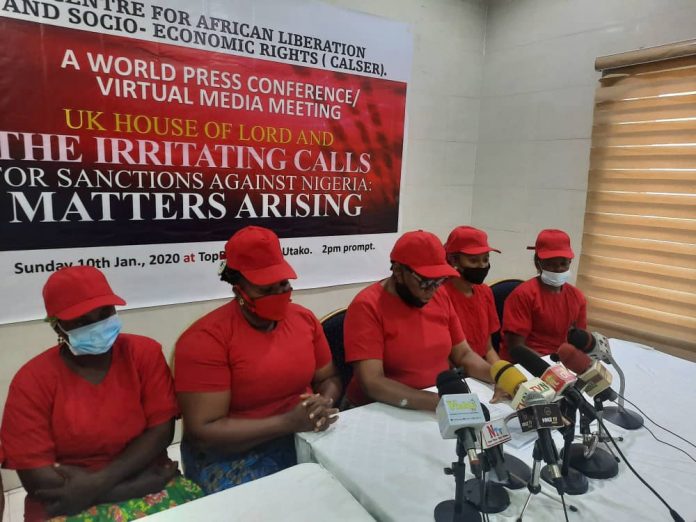 The Centre for Africa Liberation and Socio-Economic Rights (CALSER) has warned the House of Lords in the United Kingdom against promoting terrorism with its call for sanctions on Nigeria.

According to the centre, such sanction would truncate Nigeria’s democracy and ultimately enhance terrorism.

The CALSER made its stance known at a press conference on Sunday in Abuja in response to alleged killings targeted at Christians in the North.

In her address, CALSER’s President/ Convener, Prince Ajibola said the UK lawmakers’ move is laced with mischief and an agenda well-intentioned to cause international embarrassment to the Nigerian government.

Ajibola noted that the letter to Dominic Raab, the UK’s Foreign Secretary, House of Lords is meant to create discord between Muslims in Nigeria and Christians.

She noted that Christians are not the only victims of the killings as Muslims has also been targeted.

Instead of promoting a “religious sectarian debate” and terrorism, Ajibola urged the UK lawmakers to support Nigeria to overcome its current challenges.

The Centre for Africa Liberation and Socio-Economic Rights, however, called on the international community to join hands with Nigeria in tackling terrorism rather than placing senseless sanctions against the country.

The centre also advised the lawmakers calling for sanctions against Nigeria to put a stop to their actions and offer their apologies to the country.

The Centre for Africa Liberation and Socio Economic Rights ( CALSER) has expressed their indignation at the call for UK sanction on Nigeria by some members of the United kingdom house of Lords. For we know that, “to be feared is to fear, because no one has been able to strike terror into others and at the same time enjoy peace of mind.” The recent calls over the killings of Christians in the North are obviously sightless and intolerably frivolous. We consider this as an odious attempt to stultify democracy and cause disharmony.

Indeed, terrorist organizations have “harvested” the globalization process to improve their methods of operation. They often refrain from using factory-made explosives, for example, and instead use materials that can be easily obtained from local sources (such as ammonium nitrate).

And, ironically, locally-made materials are being used with greater frequency to achieve terrorist objectives. Perhaps the best example of this is the fact that even the well-known Al Qaeda (AQ) used locally-sourced American-made materials (Boeing airplanes) to destroy American targets on September 11 on America soil.

The Centre for Africa Liberation and Socio Economic Rights having dissected the issues raised and canvassed by some members of the United Kingdom house of Lords, wishes to state that their stand is laced with mischief and an agenda well-intentioned to cause international embarrassment to the government of Nigeria. It worthy of note that most of these terrorist organizations have local and international backings; they disseminate vital information to them on having a good strategic plan, and also help in funding, so that they can procure standard equipment and machineries of war.

It is pertinent to note that it is misleading and unfair for Intersociety and other agencies to infer that only Christians has been the major victims of this attacks by reporting adulterated and exaggerated figures,  just to stir up religious intolerance among the peaceful citizens. Report has it that many of the casualties of the terrorist attacks in the northern part were of the Islamic faith.

We therefore say that, reducing the act committed by this terrorists to a religious sectarian debate is an irresponsible act that should not be encouraged by anyone or nation.

It is imperative that the members of parliament who made this calls be aware of the influence and power they possess in parliament. They should therefore exercise this power towards promoting peace in Nigeria rather than create discord and hostility. What Nigeria needs from the UK aren’t sanctions, but rather support towards overcoming the current challenges the country is faced with.

The letter to Dominic Raab, the UK’s Foreign Secretary, House of Commons, London tends to slander the Islamic Religion and its appurtenances. It only serves to create discord between Muslims in Nigeria and Christians. Nigeria has suffered a lot from inter-tribal and inter-religious wars for a long time. The signatories to that fallacious letter should have been aware of the growing tensions between the two religions in the country and would have done well to avoid any offensive innuendos that might stir up hostility in the country.

The statistics stated in the petition were grossly exaggerated. They claim that over 34,400 Christians have been killed in Nigeria since 2009 by both Boko Haram and Fulani Militia. This is obviously inaccurate as they are merely claims by organizations that are yet to prove these facts. These are figure blown out of proportion in order to put this administration in bad light.

Let us be cognizant of the fact that Christians are not the only ones attacked by these so-called Islamic Militia and Fulani Militia. Muslims are also victims of this senseless terrorism. There have been several proven cases of Islamic women and children being kidnapped and raped by these terrorists, yet, they weren’t mentioned in the petition. This is a clear attestation to the fact that these members of parliament involved had mischievous intentions of sowing discord and disharmony and attempt to defame the Islamic religion.

It was also stated that Nigerian security forces had committed crimes against humanity which according to the petition include: murder, rape, enforced disappearance and other cruel treatments. This is a big insult on the brave and noble men of the Nigerian armed forces who have given their all towards ensuring the protection and safety of the lives and properties of Nigerian citizens. The petition also accused the Nigerian armed forces of crimes such as unlawful imprisonment and conscripting children under the age of fifteen years into armed forces. This is laughable as every good citizen of Nigeria is aware of the fact that the minimum age for enlisting into any division of the Nigerian Armed Forces is 18 years. This has been the law and till date, it hasn’t changed.

The petition made reference to the publication of a new report by Nigerian human rights group, Intersociety. The reports and statistics regarding the scale of human rights abuse in Nigeria were gravely aggrandized and uncorroborated. A matter as delicate as this shouldn’t be based on unproven reports and publications.

CLASER therefore calls on these members of the UK house of Lords to identify any Nigerian under the age of eighteen who is currently serving in any unit of the Nigerian Military. I also call on them to prove these baseless claims of theirs stated in their petition. It is very unfortunate that the members of the United Kingdom House of Lords are less informed of the challenges and oppositional threats being faced by the present administration in Nigeria. They have left the right focus of looking deeply in the root-cause of terrorism, but are swayed by the counter-effect being manifested.

Many Nigerian citizens might be suffering from human rights abuses, but sanctions are not the answer. They are merely instruments of state policy. The idea of placing sanctions on Nigeria deliberately labels the government as a rogue one that must be ‘punished’. If we go down memory lane, we discover that placing sanctions against a country barely has any substantial impact. Instead, it just makes matters worse.

The Centre for Africa Liberation and Socio-Economic Rights wishes to seize this opportunity to call on the whole world to join hands with the country Nigeria in tackling terrorism rather than placing senseless sanctions against the country which already dealing with a lot of challenges.

We consider the call for sanction against Nigeria in the same despicable manner the world has greeted the invasion of US capitol congress chamber, which was an assault that was fueled by more than four years of poison politics spreading deliberate misinformation, sowing distrust in the system, and pitting Americans against one another, and we ask that such should not rear its ugly head in the UK or anywhere else in the world.

CALSER is calling on the members who are calling for the sanctions against Nigeria to put a stop to their actions and offer their apologies to the President of Nigeria, members of his administration and the country’s armed forces who they have so ignorantly slandered.

The Centre for Africa Liberation and Socio-Economic Rights also use this opportunity to thank the president and the Nigerian armed forces for their selfless efforts in combating insecurity and promoting peace in the country despite the many challenges they are faced with. We say kudos to a job well done.