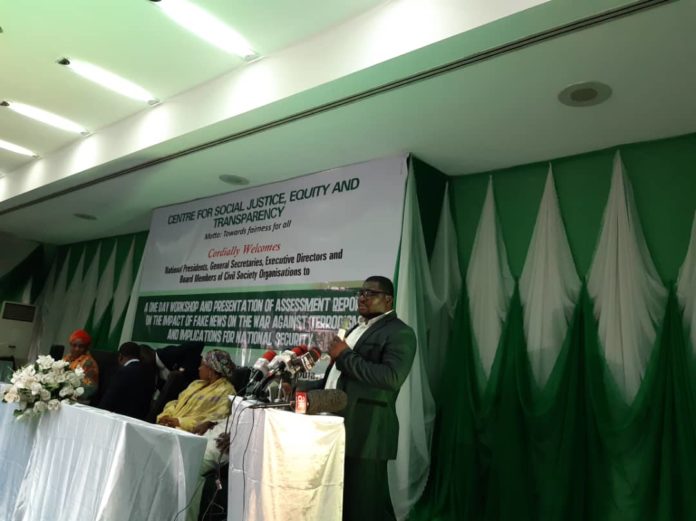 A human rights activist, Comrade Ibrahim Abubakar, has raised an alarm over the rise in fake news in the country, describing it as a “higher threat than terrorism”.

Mr Abubakar made this known on Thursday at a one-day workshop/presentation of assessment report on the impact of fake news on the war against terrorism organised by the Centre for Social Justice and Transparency (CESJET).

In his paper presentation, Mr Abubakar, president of Save Humanity Advocacy Centre (SHAC) revealed that fake news “ is inimical to national security; hostile to the morale of the troops, and by and large, it is one of the demoralizing factors making the counter-insurgency operation more difficult.”

According to him, fake news, over the years, has proven to be an undermining factor in countering terrorism engagement as well as a sponsor and promoter of acts of terror in Nigeria today.

The human rights activist added that “the rampant spread of fake news and its efficacy in relegating the real story to the bottom discourages the counter-insurgency efforts of the Nigerian Military both tactically, psychologically, and otherwise.”

“ The Nigerian media should report and analyse terror as a matter of international priority. Yet striking the right balance between informing the public without unnecessarily stoking fear or giving disproportionate publicity and attention to a terrorist organization has proven to be more difficult than it should because of the rapid spread of fake news about insurgency and counter-insurgency efforts that are most times exploited by Boko Haram.

“CSOs should mount sustainable pressure on broadcast Media that gets easily distracted by shiny ratings, which usually come with the spread of fake news, to desist from promoting contents that are fake and harmful to national development. CSOs should continually encourage reliable broadcast Media to regularly get factual information out, especially those associated with national security, even if it feels like it is falling on deaf ears amid widespread fake news.

“ The people should also be taught how to use and rely upon vital fact-checking organizations even as they also cite sources as to what they post or tweet, making sure those sources are reliable. CSOs, instead of undermining the work of the military in countering terrorism in Nigeria, could be instrumental in limiting the spread of fake news that aggravate terrorist activities by raising the populace awareness towards boycotting news media and its relatable sponsors.”