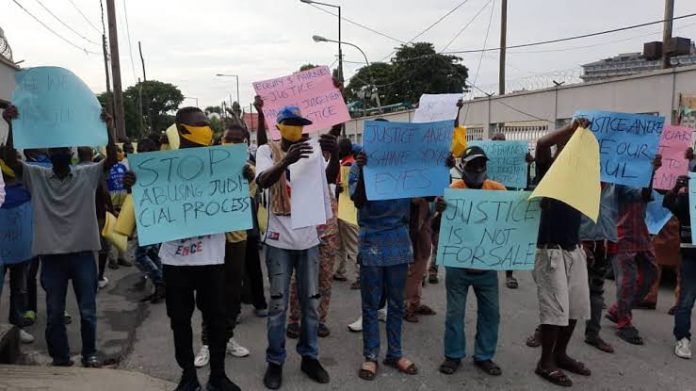 A Civil Society Organisation on the platform of Conduct and Due Process Group (CDPG) in collaboration with some retail Lottery Operators have staged a protest at the premises of Federal High Court 7, in Ikoyi to demand justice for 22 lotto companies being sued by Western Lotto Nigeria Limited over their alleged infringement of proprietary gaming rights.

The protesters which on MondayJuly 20th began the protest and continued on Tuesday July 21st, over what they described as bias in the handling of a lawsuit filed by Western Lotto Limited, said they will not relent until justice is served.

Chanting solidarity songs, including “We no go gree oh, we want justice, we no go gree”, they marched around the court’s premises demanding justice on behalf of the 3rd to 25th defendants in the suit.

In the case being handled by Justice Chukwujekwu Aneke, Western Lotto Limited sued 23 rival lottery firms over alleged infringement on its licence on “Ghana games.”

In a Motion on Notice brought pursuant to Section 6(6) of the 1999 Constitution, the 3rd defendant, Premier Lotto Ltd, is specifically seeking three reliefs, including “An order asking the court to decline jurisdiction to entertain, adopt or otherwise give effect to the Terms of Settlement executed between the Plaintiff, Western Lotto Ltd and the 1st Defendant, National Lottery Regulatory Commission.”

One of the defendants is Premier Lotto Limited, popularly known as Baba Ijebu Gaming Limited, which belongs to Chief Keshington Adebutu.

In Dec. 2019, Justice Aneke had granted an order authorising Western Lotto to enter into and search the offices of the defendants for evidence of the alleged infringement on its licence.

But in a statement made available to newsmen by the protesters’ spokesperson, Adeniran Raymond, said Conduct and Due Process Group in alliance with retail lotto operators will continue to occupy Federal High Court 7, Ikoyi until justice is served.

“Upon realizing that there was an impending conflict of interest which could lead to the impediment of justice we quickly wadded in and occupied the court to air our fears and demand for justice. The case was slated to be heard in court on the 20th of July, 2020 by Justice Chukwujekwu Aneke, however, the protest lead to the adjournment of the case until Tuesday 21st of July, 2020 at 11:30.

We are unrelenting and we have strong believe that Justice Aneke will ensure that justice is served. If allowed Western Lotto would suffocate and oppress lotto companies. This would affect even the retail lottery operator who are already struggling to survive.

“It is unfair business practice to allow a company stifle the competition until there is none. That is tantamount to anti-competitive practice and it will not be tolerated.

“For those who do not understand, what the Kashamu owned Western Lotto is trying to do is equal to blocking all mobile telephone service providers from offering 4G services to its customers.

“It is an unfair business practice for competing companies and the impact and consequences would be unprecedented. For this reason, we shall be staging a second part of our peaceful protest at the Federal High Court 7, being presided on by Justice Chukwujekwu Aneke and we shall demand for justice,” Raymond stated.