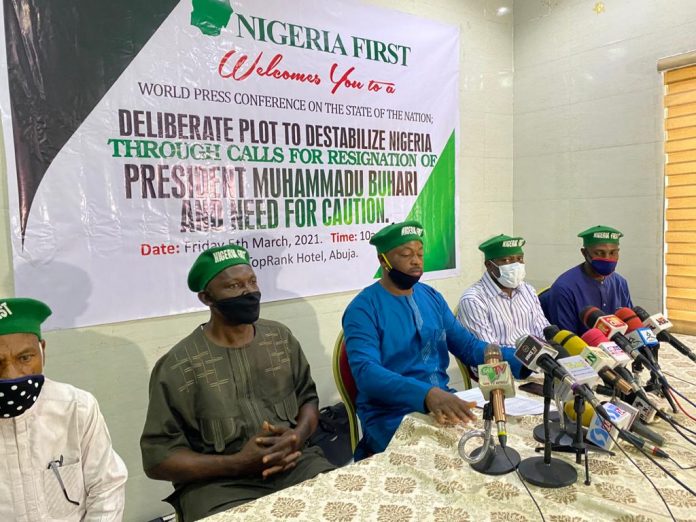 According to the group, Sowore, having failed legitimately to become president, aims to make the country ungovernable for the current administration, not minding the consequences.

The Nigeria First movement made these known at a press conference on Friday in Abuja.

In his address titled ‘Omoyele Sowore: A call for caution in Nigeria’, the group’s Deputy President, Ndubisi Nwogu, noted that the self-acclaimed activist is not acting in insolation.

Mr Nwogu revealed that the Sahara Reporters founder has the backing of both local and international saboteurs who are pained with the level of sustainable growth and development experienced in Nigeria under President Buhari.

He added that the call for President Buhari’s resignation is part of the overall plot and in the weeks and months ahead, more and more attempts to destabilize the country would surface.

The group, therefore, warned Sowore to desist from this ignoble quest which by all intents and purposes would serve the interest of his paymasters.

It further cautioned that the former presidential hopeful would be held responsible should there be a breakdown of law and order in the country.

Nwogu, however, urged all well-meaning Nigerians to rise in defence of the country in this “critical period of our existence by calling to question the motives of Sowore and his goons in their antics towards misleading the unsuspecting members of the general public”.

You are all warmly welcomed to this event intended to put issues in proper perspective in the interest of the generality of Nigerians. The leadership of Nigeria First believes that recent events in the country indeed calls for caution from all relevant stakeholders at the risk of the country erupting in flames at the behest of some unscrupulous elements that are bent on destabilizing the country for reasons best known to them.

It is indeed despicable that some individuals and organizations would elect to throw caution in the wind by actively promoting causes that would divide the country in a most reckless manner and at the chagrin of our peace and unity as a country.

Nigeria First as a pan-sociocultural group is reiterating that recent events in the country are assuming a dangerous dimension, especially with the call for the resignation of President Muhammadu Buhari by no group other than the Omoyele Sowore led RevolutionNow Movement.

It is indeed obvious that Omoyele Sowore is the brain behind the despicable rally, which is a resurgence of his infamous call for a nationwide revolution in the country that was hugely a flop some months back.

Sadly, the likes of Omoyele Sowore have elected to sell their souls to the devil in return for a plate of porridge. This goes a long way to state the obvious truth that Omoyele Sowore is a cantankerous individual that ekes a living from blackmail and inciting violence, yet, parading himself as an activist and advocate for sustainable growth and development in Nigeria.

Nigeria First as a concerned stakeholder in Nigeria wishes to emphasize that it is now public knowledge that the overarching objective is to destabilize Nigeria and this anomaly is fast gaining traction in a dangerous dimension.

It is also instructive to state that Omoyele Sowore is not acting in insolation in the sense that the sponsorship of his nefarious activities is a combination of both local and international saboteurs that are angry with the level of sustainable growth and development experienced in Nigeria since President Muhammadu Buhari assumed leadership of the country.

Having this as a fact, it then speaks volumes that those that held the country by the jugular for several years have refused to come to terms with the present reality that it is no longer business as usual.

Nigeria First states that the sin of President Muhammadu Buhari remains the fact that he has put the interest of the country at heart and against the interest of a select few that have fed fat from the rot in the system, and responsible for the level of decadence in the polity.

It remains the considered opinion of Nigeria First that the plot to destabilize Nigeria is high on the list of the task before Omoyele Sowore and his goons that have been highly mobilized to incite a revolution in the country so they can truncate our nascent democracy.

Thus, the rally by RevolutionNow is indicative of this grand plot that has been well-planned as well as funded towards achieving their despicable objective aimed at causing unrest in the country.

Nigeria First wishes to use this medium to bring to the attention of Nigerians that indeed Omoyele Sowore is acting the script of some vested interest within political and ethnoreligious circles in Nigeria. And it has indeed assumed a dangerous dimension that indeed calls for concern from all well-meaning Nigerians that are desirous of sustainable growth and development in the country.

Nigeria First is using this medium to warn Omoyele Sowore to desist from his ignoble desire in destabilizing Nigeria which by all intents and purposes would serve the interest of his paymasters in the country and outside the shores of the country.

Nigerians must also come to the realization that the revolution now rally calling for the resignation of President Muhammadu Buhari is a part of the overall plot and in the weeks and months ahead, more and more attempts to destabilize the country would be experienced in the public space in Nigeria.

We are urging well-meaning Nigerians to rise in defence of Nigeria in this critical period of our existence by calling to question the motives of Omoyele Sowore and his goons in their antics towards misleading the unsuspecting members of the general public.

Nigerians must know that Omoyele Sowore by all indications is neck-deep in ensuring that Nigeria is destabilized through his RevolutionNow group. And their recent outing is just one out of the avalanche of planned events they have up their sleeves.

Nigeria First wishes to state in unequivocal terms that Nigerians should hold Omoyele Sowore responsible should there be a breakdown of law and order in the country in the coming weeks and months.

Having stated the above, Nigeria First as an organization would continue to engage other critical stakeholders in Nigeria towards nipping in the bud the plans of Omoyele Sowore and his paymasters towards destabilizing Nigeria.

Thank you all for your time and attention and God bless us all.