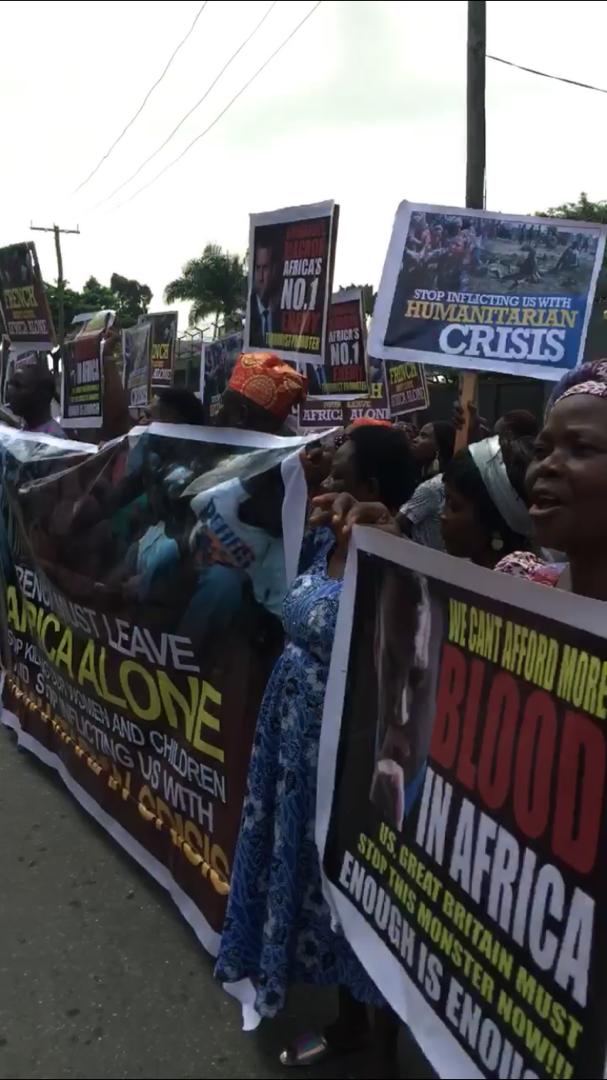 ALV, on Monday, stormed the French embassy in Lagos to express their displeasure towards Mr Macron who has been fingered to be sponsoring the propagation of terrorism on the continent.

In a letter jointly signed by Chairman, Pa David Samuel and Publicity Secretary, Compatriot Ayodeji Ologun, the ALV vent their pleasure towards the European nation, calling on it to “stop funding the nefarious activities of Boko Haram”.

The visibly angry Africans, who hailed the doggedness of the Nigerian Army despite this obvious plot to jeopardize their gains, called on France to quit funding the terrorist group at the detriment of human lives.

According to ALV, this may not be unconnected from France’s desperation to continue exploiting Nigeria’s economic resources in the Lake Chad Basin region.

The Africa Liberation Vanguard cited the recent attack in Cameroon, where Boko Haram abducted 18 people, as how the European nation is expanding the frontiers of terrorism in Africa.

As matter of urgency, though, the group warned France to discontinue this inglorious spread of terrorism on the African continent.

We are a group of war veterans of Nigerian origin but with a membership that cuts across all the 52 strong African countries. As a background, our association is devoted to promoting the interest of Africans against the vicissitudes and interest of some western powers in our affairs as a continent.

The Majority of our members have, in times past, fought to defend Africa against colonization, and it suffices to state that we were very successful in our endeavor.

We are gathered here at the French Embassy in Lagos to send a very important message to you as regards some areas of concern we have in the ongoing war against Boko Haram Terrorism in Nigeria and other African countries.

Dear President Macron, this is not a violent protest, and it is not in any way intended to cause bodily harm to anyone of French origin at the Embassy or in Nigeria. But this is a protest that is both psychological and emotional for us given our age and the realization the French support for the Boko Haram terrorist group is overwhelming and not in the best interest of Nigeria and Africa.

We wish to use this medium to intimate you that Nigerians and the rest of Africa are indeed aware of the covert support France is extending to the Boko Haram terrorist group operating in North-East Nigeria and other African countries.

The support of France, which you are aware of, has seen to the bolstering of the armory of the Boko Haram terrorist group and also given them the impetus to continue with their nefarious activities.

The African Liberation Vanguard is hugely at a loss and disappointed as to why France under your watch would be funding the activities of a terrorist group at the detriment of human lives, especially women and children that have been at the receiving end of the Boko Haram terrorist activities.

Dear President Macron, it must be stated that as the President of France, you cannot say that you are not in the know of what is happening in your country as regards the supply of military logistics to the Boko Haram fighters. We know that the buck stops at your table and wonders why such illegality and crime against humanity are attractive to France.

The hatred of France towards Nigeria is indeed legendary, and this explains why it has been doing everything untoward towards compromising our territorial integrity. We also know that France is doing this to ensure that there is no peace in Nigeria so that it can continue to exploit our economic resources in the Lake Chad Basin region.

We are consequently by this protest, warning France to desist from its nefarious activities of selling guns and military hardware to the Boko Haram terrorist group so they can continue to confront the Nigerian troops in battle.

We wish to state that this is an affront to our sensibilities as a people and another attempt at colonization of Nigeria by France. This is not only appalling; it’s also of poor taste that would be resisted by every stretch of the imagination.

This is the time for France and its allies to stop fooling the world as regards its commitment to the fight against terrorism because it lacks every moral right to do so when it is busy selling arms and ammunition to terrorist groups around the world.

The French authorities must stop this deceit because they are the principal sponsors of terrorism in Africa to reduce Africa to French dependency for economic exploitation purposes.

The recent example of Cameroon, where Boko Haram abducted 18 people, is another example of how France is expanding the frontiers of terrorism in Africa. Boko Haram have caused havoc in Nigeria with the help of France, and now they are expanding their frontiers to other African countries.

This much we have seen in the violence been perpetrated by Boko Haram in Niger and Chad that has resulted in the deaths of unarmed civilians, and thanks to almighty France for supplying them with arms and ammunitions.

The African Liberation Vanguard is by this protest saying enough is enough to France in this dubious business. France must, as a matter of urgency, discontinue the inglorious spread of terrorism on the African continent.

The African Liberation Movement is giving the French Authorities a 21 Day ultimatum to stop funding the nefarious activities of the Boko Haram terrorist group. And with immediate effect.

It must be stated that should France continue on this dishonorable path, Africa would indeed prove that it cannot be colonized for the second time without resistance.

The African Liberation Movement wishes to let the world know that France has carried on with the campaign to spread terrorism in Africa in continuation of its disdain for our people, history, and culture.

Dear President Macron, it is our considered opinion that the early France discontinues this despicable business, the better for everybody. A word is enough for the wise.