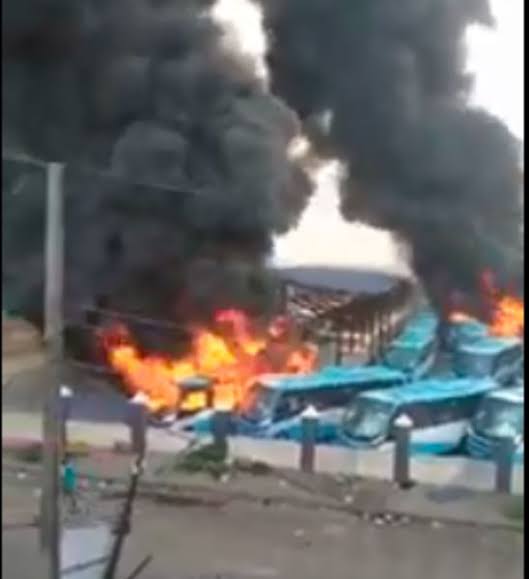 Some well-meaning Nigerians, under the aegis of March4Nigeria, say some purported EndSARS protesters are mobilising hoodlums to wreak havoc in the Federal Capital Territory, Abuja and Lagos.

According to the group, these extremist elements will relaunch violent uprisings under the guise that their members are being hounded.

The group said they will also blame the routine law enforcement process, freezing of accounts and the placement of some persons of interest on a no-fly-list.

Speaking at a press conference on Monday in Lagos, National Secretary, Comrade Onimisi Bello said funds for the exercise has already been laundered online using cryptocurrencies.

The March4Nigeria, however, condemned the move to incite Nigerians back to the streets, as it could jeopardize the Federal Government’s proposed police reform.

While calling on parents to guide their children against being used as agents of destruction, the group urged security agencies to use all necessary force to protect the law-abiding citizens.

Read the full speech below:

Gentlemen of the press, you will recall that Nigerians took to the streets to protest against police brutality as typified by the activities of the defunct Special Anti-Robbery Squad (SARS). The protests were peaceful, and Nigerians tabled five-point demands that the Federal Government promptly accepted, which gave rise to the concept of 5for5. Part of the government’s response was the termination of the infamous SARS.

These protests were christened “#EndSARS” consistent with the demand for an end to SARS. When the protests continued even after the government has liquidated SARS and accepted the demands, some of us became worried as we had expected, logically, that there would be a retreat from the picket lines to allow the government to implement the agreed changes.

We soon found out that the protests have been hijacked by selfish and dangerous interests. It became obvious that these elements were paying celebrities, commercial activists and clout chasers to incite Nigerians on social media. The same elements hired thugs and hoodlums to disrupt the same protests they were mobilising people to be part of.

The intentions of these elements for the protests soon became obvious as they proceeded to shut down major roads and public infrastructure. They reportedly precipitated the Lekki Toll Gate incident to justify the industrial scale arson and looting that they unleashed on the country. Several major businesses will take years to recover from this attack many smaller businesses will never recover.

Upon the discovery of the insidious plan of the element, the patriots among us called a halt on protests and began the March4Nigeria movement. We shifted focus to holding the government accountable for implementing the 5for5 demands. We believe that more can be achieved through dialogue and continuous engagement as opposed to destructive confrontation.

The dangerous elements that attacked Nigeria have retained the #EndSARS label even when SARS has been terminated. This is why #March4Nigeria distanced itself from what is now #EndSARS movement. It has no relationship or connection whatsoever with the original protest against police brutality, high handedness,  abuse of human rights and extra-judicial execution.

We have now uncovered plans by these extremist elements to relaunch violent protests under the brand #EndSARS to undermine the Nigerian state. The excuse they will use for these fresh rounds of protests is to allege that their members are being hounded. Specifically, they will cite the routine law enforcement process, the freezing of accounts linked to crime and the placement of some persons of interest on a no-fly-list, as the basis to spark off these violent protests.

An early indication of this plot is the withdrawal of their representatives from the Lagos State Panel of Inquiry citing the aforesaid law enforcement processes. This move by the #EndSARS elements is to undermine the panel on one hand while inciting people to rush back to protesting based on sentiments.

There has also been an escalation of inciteful social media posts to draw Nigerians back to the streets while the hoodlums that were used for arson have again been placed on standby. Funding for the payment of the hoodlums has been laundered online using cryptocurrencies that have been converted to foreign currencies, transferred to unanimous accounts and the money is being converted to Naira and held in cash to evade scrutiny of law enforcement agencies.

Furthermore, the #EndSARS protesters have reportedly drawn up a list of government and private assets and businesses to destroy to spark reprisals that will then snowball into a tit-for-tat all-out war along ethnic or sectarian lines.

What we have been made to understand is that these people will prioritize Lagos and Abuja for their provocative protests and attacks. Abuja is being targeted to cause the country the maximum international and diplomatic embarrassment since the international media focus on the city in their coverage. Lagos is being targeted as part of a strategy to crumble Nigeria’s economy on one hand and to cause ethno-sectarian strife there on the other hand because of its cosmopolitan nature. The protests will equally be launched in other states with a plot to commit further arson and looting to intensify the assault on Nigeria’s economy.

March4Nigeria condemns the plan to incite Nigerians back to the streets under any guise as this will directly interfere with what we are expecting from the Federal Government in terms of reform. The organic timeline of three months during which we want to put the government to the test will be impacted since any distraction caused by having to manage protests will hurt the long-term feasibility of the changes we have demanded from government. The focus should be on pressuring the government to perform and not distracting the entire country.

Given what the country experienced when the #EndSARS protests were hijacked by these same persons, #March4Nigeria calls on all security agencies to use all necessary force to protect the law-abiding citizens of the country, including pre-emptively taking the ringleaders of this destructive clique into custody until they no longer pose any threat to the rest of us. They are not genuine protesters just as their agitation has lost legitimacy with the carnage and murderous campaign they launched against the country.

We urge parents to warn their children and wards not to be used by agents of darkness to carry out looting of properties, burning of police stations and killing of innocent Nigerians in the name of #EndSARS. They should impress on the young people that there are laws in Nigeria and the law is either on one’s side or against one, depending on what choices the individual makes.

March4Nigeria urges state governments to review their crisis response plans in other to be responsive in deploying mitigating measures to counter the national meltdown being planned by these extreme people.

It is our fervent prayer that those who had supported the extremist elements of the #EndSARS protests in error will now retrace their steps and withdraw support from them and also point the way in how to neutralize the threat they pose to other Nigerians. To continue supporting the movement when it has exposed the direction of its long-term plan will be a great disservice to the nation.