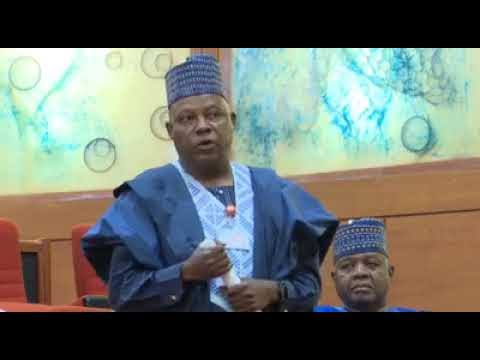 The Coalition of Buhari Supporters and Friends (CBSF) has called on security operatives to investigate, arrest and prosecute Senator Kashim Shettima over what it described as plots to overthrow President Muhammadu Buhari.

According to the group, the Borno Central Senator has crossed into treasonable territory with his latest utterances on national security and must be immediately brought to book.

In a statement signed by its President, Dr Shamsudeen Abu, on Wednesday, the coalition accused Shettima of being behind the security situation in the north-east.

The Coalition of Buhari Supporters and Friends reminded the lawmaker that as governor of Borno State for eight years, he abused his office and failed to find any tangible solution before rushing off to the National Assembly.

Instead of a document or seek the audience of the president, the group noted that Shettima has resorted to heating the polity in a bid to discredit and possibly lead a revolt against the current administration.

The Coalition of Buhari Supporters and Friends, therefore, demanded the immediate arrest of Shettima for treason.

It, however, urged the Federal Government to immediately direct the Department of State Services (DSS) and the Nigeria Police Force to act before Shettima does more damage.

The Coalition of Buhari Supporters and Friends is disappointed at the vilification of President Muhammadu Buhari by former Borno State Governor, Kashim Shettima, who now represents his state’s Central Senatorial District at the National Assembly. In the desperate bid to undermine President Buhari, Shettima has crossed into the treasonable territory for which he must be immediately investigated, arrested if found culpable and subsequently tried.

We find it most unfortunate that Senator Shettima is still trapped in the impish disposition of ventilating his perceived grievances in the media when he could have sought and gained an audience with President Buhari to constructively make his observations and suggestions for addressing the lingering security situation in the northeast and other parts of the country instead of deliberately heating the polity with engagements that are not meant to yield a positive result.

Shettima’s behaviour is however not surprising because it is consistent with the theatrics of someone who has nothing of substance to offer in the first place. Someone with workable solutions would have documented the same and present to the Federal Government as an asset in addressing the decade-long Boko Haram insurgency.

In other climes, a public office holder like Shettima, who abused his eight-year stay in office as governor to strengthen Boko Haram, would have been sacked from politics by the electorates to insulate the system from further contamination from his treasonable activities. The entire country is much aware of how wanted Boko Haram commanders were harboured in properties linked to Shettima and his associates, a development that enabled them to evade apprehension by law enforcement agencies.

Our Coalition reminds Shettima that he cannot eat his cake and have it. He is a major factor in the current state of insecurity that Borno state with the entire north-east axis is facing today. He cornered all the funds meant for local government councils in Borno State and refused to build or reconstruct rural infrastructure that would have made it possible for people to return home, which would have prevented the vacuum that Boko Haram insurgent are exploiting.

As a result, the former governor’s outburst, for us, suggests someone that wants to execute a civilian coup to overthrow President Buhari, which is why he arrogated to himself the power and capacity to determine for Mr President how many military chiefs he should fire and appoint.  Even for a man, who has on many occasions with his allies in the south-west organized prayers with marabouts for President Buhari to become medically incapacitated, this latest round of campaign of calumny has reached a new level of callousness.

The former governor’s media interview, in which he flayed President Buhari, must not be misconstrued as something geared towards the common good but rather, it should be seen for what it is, which is a media offensive meant to inspire Boko Haram terrorists with the notion that the government is divided on the war against terrorism.

Shettima is also strategically tapping into the prevailing mood in the country in a way that will cause widespread disaffection against the person and office of the President such that there will be an orchestrated breakdown of law and order, result in aob action and physical violent attacks on the government.

The Coalition of Buhari Supporters and Friends, therefore, demands the immediate arrest of Kashim Shettima for treason. The Federal Government must, to this end, immediately direct the Department of State Services (DSS) and the Nigeria Police Force to act before Shettima does more damage. He should be put on trial for whatever indictment is found against him upon investigation.