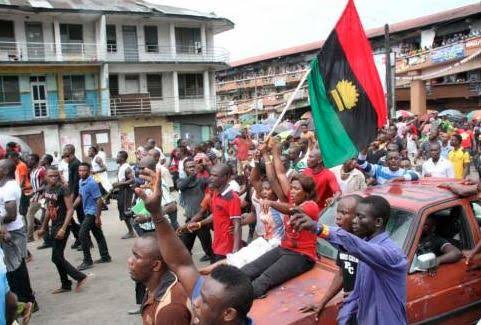 The Igbos in Nigeria Movement (INM) has fingered an alliance between the Indigenous People of Biafra (IPOB) and France to be behind a video aimed at tarnishing the image of the Nigerian Armed Forces.

The group believe this was part of the pact between the proscribed sect and the European nation after the former joined list of terrorist groups allegedly receiving financial backing from President Emmanuel Macron.

The INM made this known at a press conference in Enugu on Friday to address what it described as “insurrectionists agenda by IPOB”.

In a statement signed by President, Mazi Ifeanyi Igwe, the group alleged that the alliance, among others, is aimed at partitioning Nigeria into enclaves of micro-states that will be governed by corporations from western countries.

The group said: IPOB, being a desperate and independence-demented sect don’t mind helping France achieve its mission – so long an independent state is carved out for them.

IPOB’s desperation, according to the group, reached a new level, as it has begun sabotaging the military in pursuit of Boko Haram interest.

A clear instance, the INM reckoned, is a Boko Haram video that was in reality produced by the IPOB’s propaganda wing.

According to the south-eastern body, the video was targeted at diverting attention from the atrocities being committed by IPOB members in the southeast.

The Igbos in Nigeria Movement, therefore, condemned the recent activities of IPOB in the strongest terms possible and urged all peace-loving Igbo to do likewise.

We have watched with dismay and utmost concern the worsening terrorist tendency of the Indigenous People of Biafra (IPOB) in recent weeks, particularly given the danger this pose to the stability and security of Nigeria.

In the past, we had taken the full extent of IPOB’s radicalization and militarization for granted, but we are now better informed about our error. IPOB is a full-blown terrorist organization that is driven by a desire to precipitate lawlessness that is aimed at destroying Nigeria as we know it.

Our concern stemmed from latest intelligence in the security circuits that IPOB has joined the list of terrorist organizations that are receiving financial backing from foreign countries to implement an agenda aimed at partitioning Nigeria into enclaves of micro-states that will be governed by corporations from western countries.

Among the sponsors that IPOB recently signed up to is France, which has declared itself a mortal enemy of Nigeria, one that is looking to expand its subversive activities beyond the supply of weapons and logistics to Boko Haram terrorists to begin arming groups in southern Nigeria, where economic assets of the country would be targeted. Only a group of misguided insurrectionists like IPOB will sign up as agents of destabilization to foreign interests eager for the disintegration of Nigeria.

We have discovered that the directive for IPOB members to attack visiting Nigerian dignitaries in Europe is a cover for discouraging senior government officials from visiting that continent because of their fear of what could be found out by these officials in the course of such visits. It is a ploy devised to ensure that Nigerian officials do not get to interact with the international community in European countries since this will expose the newly forged link between IPOB and France.

Worryingly, IPOB is beginning to implement its own side of the deal to sabotage Nigeria for France through the activities it is beginning to carry out in pursuit of Boko Haram interest. A clear instance of this is a purported Boko Haram video that was in reality produced by the IPOB’s propaganda wing. We have learnt that the video was targeted at diverting attention from the atrocities being committed by IPOB members in the south east where its lawyer, Ifeanyi Ejiofor, recently ordered the killing of two senior police officers and also incited attacks that injured many others.

Knowing that the law is not on their side and that they are no match to the Nigerian state to which the majority of Igbos willingly belong and thrive in, IPOB terrorists have resorted to weaponizing information and infecting the communication space with fake news. The video they doctored for Boko Haram has now been weaponized into something they are using to demand for the resignation of military heads. This development clearly indicate that IPOB’s international sponsors are desperate to get rid of the current military leadership in the hope that they can edge Nigeria into appointing pro-IPOB and pro-terrorist military leaders. This is a strategy they are eager to put to the test because these foreign interests had in past pushed for the enlistment of persons they are now hopeful will step up into leadership.

Another layer of this misguided stance is IPOB’s call on Igbos not to enlist into the Nigerian Armed Forces while calling on those already in the service to resign. This is a strategy that is targeted at depleting the number of troops available to counter IPOB’s insurgency. We are aware that IPOB was advised to this strategy by France.

The call is not only unpatriotic but also a demonic agenda for IPOB to weaken Nigeria in accordance to the dictates of the Republic of France. We are condemning this call because it is one that will undermine the interest of Igbo in future because if Igbo sons and daughters do not enlist now or leave the military enmasse, the risk to us that there will come a time in the future when we will not have senior officers and that will be a travesty.

IPOB may see benefit to crippling the military because it wants to cause mayhem and unleash terror on innocent citizens, the long-term damage is what is of concern. It may look profitable today to create the impression that our security agencies have failed but the damage from such will be all encompassing.

Igbos in Nigeria Movement therefore condemn the recent activities of IPOB in the strongest terms possible and urge all peace-loving Igbo to condemn their provocation to violence. We urge IPOB members to renounce their penchant for violence.