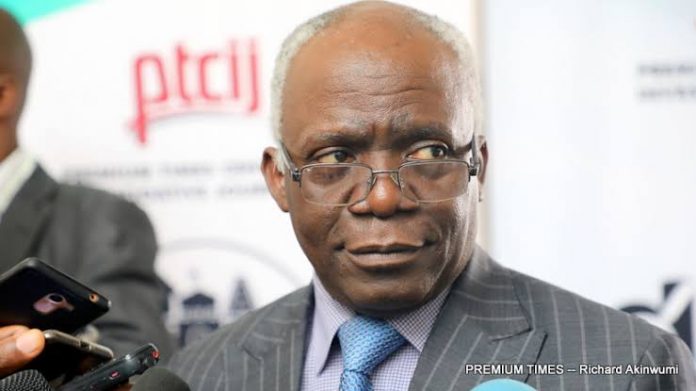 The Progressive Yoruba Youths, a cicvil society group has in strong terms condemns in its totality a statement credited to the Alliance for Surviving COVID-19 and Beyond (ASCAB), suggesting that the federal government has shown lack of capacity to deal with the violence in the north.
The new coalition, which was launched ahead of May 1, which is Workers Day named human rights lawyer, Femi Falana (SAN), as its interim chairman.

The group had claimed that authorities in Nigeria had failed to link the spread of the pandemic to failure of an effective public health system, the absence of social security and health insurance for the masses, while governments had no preference for provision of the essentials of life like housing and food security.

Reacting to the development, the Yoruba group said Falana does not have the moral standard to lead or speak for any group as he speaks from both sides of his moth and protects the interest of the Boko Haram sect.
The Progressive Yoruba Youths, in a statement by its President, Kola Salau, therefore, asked Femi Falana to put his acts together and face his legal practice, rather than being the jack of all trades, and the master of none.
The statement reads below.
“The Progressive Yoruba Youths is aware that Femi Falana is as ignoble as the group he presides over, and it is naturally expected that Nigeria should view any statement signed by Femi Falana with a pinch of salt. It is no longer news that his stock in trade is to seek attention by issuing press statements that are in most cases, a gimmick to curry patronage from clients.
“The Progressive Yoruba Youths wishes to inform members of the general public that Femi Falana speaks from both sides of his mouth and in most instances, his ultimate goal is for the attainment of his monetary gains.
“We also wish to state that if the above is not the case, there is no moral justification for Femi Falana to attempt to discredit the efforts of the federal government in addressing the security issues in Northern Nigeria, when the same Femi Falana has been rendering legal services to militant groups in Northern Nigeria such as the Islamic Movement of Nigeria (IMN).
“The pecuniary gains attained by Femi Falana for representing IMN in court are indeed a lucrative one such that his sense of reasoning was blinded when he described the proscription of IMN as immoral and illegal.
“The Progressive Yoruba Youths wishes to advise members of the general public to be cautious whenever Femi Falana contributes to issues of national concern as most times it is not in the best interest of the country.
“Femi Falana must come to terms to the reality that the unity of Nigeria is non-negotiable. As such he must be guided in his utterances and public outings so as not to jeopardize the efforts of government in dealing with the threats posed by the Boko Haram and other militant groups that he has been representing.
“Femi Falana has continued to protect the Boko Haram group through his public statements and appearances in court, yet, behind the curtain, he would ask the federal government to kill them. This act is indeed dishonourable, and he must desist from such moving forward.
“The Progressive Yoruba Youths wishes to use this medium to caution Femi Falana to be guided with his utterances and desist from playing the devil’s advocate in this critical point of our existence.
“It is expected that at this stage, Femi Falana must display decorum in his conduct and postulations of government policies and other areas of national concern. This is also not the time to play to the gallery.
“The Progressive Yoruba Youths wishes to educate Femi Falana that indeed unguarded statements such as his, has the potential of leading to a round of national crises that may threaten the fabric of democracy in the country.
“The era of attempting to hide under cover of being a lawyer to constitute a nuisance to the country must stop. The era of delving unnecessarily into issues outside his knowledge must also end because such disposition is an indication of ineptitude in the thought process which ultimately results in discordant tunes.
“Even though we are aware that such display is a marketing strategy for his law firm, however, given the effect of the Coronavirus pandemic in the country, Femi Falana should know better that this is not the time for outright insinuations and illogical conclusions. That is also premised on whether the group he is promoting “The Alliance for Surviving COVID-19 and Beyond (ASCAB) does not only exist in his head and nowhere else.”