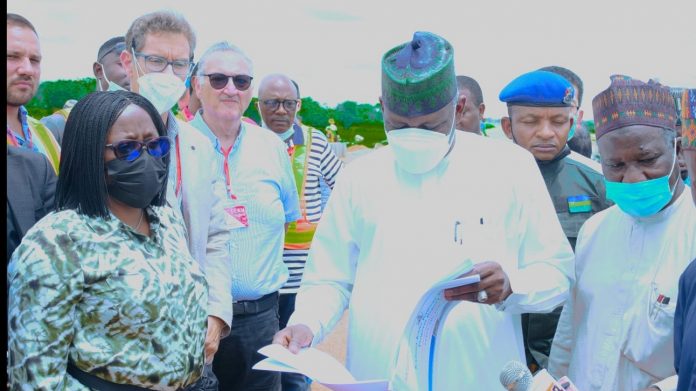 The contractors of the much talked about Kaduna – Kano rail line China Civil Engineering and Construction Company (CCECC) has delivered  just 12% percent of work eleven months after President Muhammadu Buhari inaugurated the project, the Minister  of Transportation, Muazu Sambo has disclosed.

Recall that the former Minister of Transportation Rotimi Amaechi had in March assured Nigerians that the project would be delivered for commercial activities before May 2023, based on the pace of work by the contractors and the availability of funds.

Muazu, who spoke in Kano Thursday blamed insecurity as the major drawback largely responsible for the failure of the contractor to keep up with the expected pace of the project.

He however promised to engage the armed forces and the police to design a template for security, not only along this corridor but to serve as a template for all other corridors. This was contained in a press statement signed by Director Press and Public Relations, Eric Ojekwe.

The Minister also promised that the Federal government will prioritize the completion of the Kano-Kaduna Rail project due to the immense socio-economic impact it will have not only on the communities along the rail corridor but the country as a whole.

He said: “We know that most of the agricultural products in Nigeria are produced in the northern part of the country and taken to the south while goods that are imported into the country that comes through the seaports have to come through the south. So, it is an understatement if I say that this project is critical to the well-being of Nigerians”.

Mu’azu, also spoke on encroachment on lands for which the Ministry has already paid compensation and acquired, assuring that a high-level meeting with the Governor of Kano state, Abdullahi Umar Ganduje, should address such issues.

The Transportation Minister, later inspected the ongoing University of Transportation project, in Daura where he said the proposed December, 2023 completion date is not acceptable and urged Messrs. CCECC to hasten on earlier delivery date.