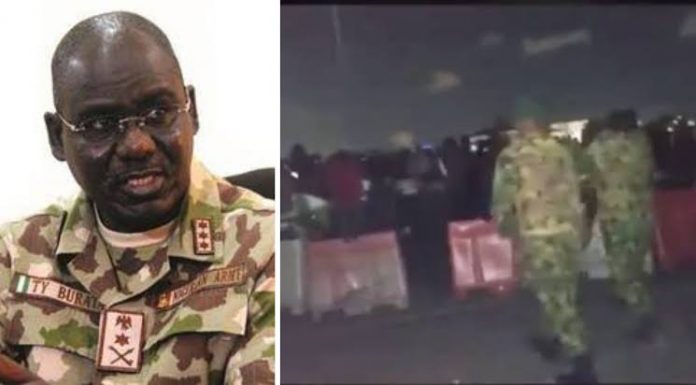 The conduct of the Nigerian Army at the Lekki Tollgate has been described commendable and in tandem with international best practices by a British freelance journalist Michael Edwards. Mr. Edwards, who is also an expert in radio-visual analysis, stated this while speaking with reporters on the sides at the Lagos State Judicial Panel of Inquiry and Restitution for victims of police brutality.

He emphasized that the actions of the soldiers at the scene of the EndSARS protest as seen on the CCTV footage is in tandem with international best practices.

“I say that the soldiers acted with the utmost professionalism as evident in the CCTV footage. I was alarmed that I didn’t get to see any display of brutish force and firing into the crowd as alleged. In truth, what I saw as an expert in radio-visuals analysis is a team of soldiers applying utmost restraint while attempting to disperse the crowd.”

“This I must add would have been the case in any clime including the United Kingdom. The CCTV footage revealed this, and I believe there should be no dispute about this amongst the stakeholders.”

He further added that with what was revealed in the CCTV footage, the Nigerian Army should be commended and not vilified by any individual or group.

“It is my opinion that the Nigerian Army deserves commendation for its actions at the Lekki Tollgate. This is not an assumptive position, but one hinged on the availability of facts as presented in the CCTV footage at the panel.”

“I think there were too many emotions attached to the incidence that the critical elements were missed. The presence of soldiers indeed infuriated some without regards to its mission and what would have happened in an already riotous situation. Do not forget that earlier in the day there had been skirmishes in parts of the state that led to the destruction of properties and deaths as well which was responsible for the imposition of a curfew by the Lagos state government.”

“My view is that the intervention of the soldiers was to prevent a further escalation of the conflict and not otherwise as insinuated in many quarters with the narrative that live ammunition was fired into the crowd. I sincerely think that would have been irresponsible, but that wasn’t the case.”

“I watched the footage; likewise, many others and the visuals were quite impressive. There was no time that it captured soldiers firing into the crowd; what was seen were soldiers approaching the crowd with their riffles faced upwards. There was also a bit of interaction between the soldiers and some front liners at the tollgate before shots were fired into the air and not into the crowd because if that weren’t the case, those front-liners would have gone down. But no, instead some of them approached the soldiers’ afterwards.”

“With my experience having covered conflict situations in different parts of the world for over 20 years, I have seen where excessive force was used during civil uprisings, and the incidence at the Lekki Tollgate cannot be regarded as such because there would have been no way the number of deaths would not run into hundreds if that had been the case. Don’t also forget that it was a riotous situation and there is bound to be pandemonium in such instances which was exactly what the CCTV footage revealed.”

He also stated that the CCTV footage revealed a professional display by the soldiers at the Lekki Tollgate.

“What I saw was an improvement in the conduct of the Nigerian Army whose operations I have been privileged to have covered as a freelance journalist. It tells that is an emphasis of abiding by the rules of engagement in quelling civil uprisings because the world is a global space and new media age has made accountability a top priority. The soldiers displayed this much, and it is contrary to what was speculated in certain quarters.”

Mr. Edwards consequently advised Nigerians to also verify pieces of information before concluding as there are lots of mischief-makers that thrive in spreading unsubstantiated information to suit their purpose.

“This is the era of fake news and Nigerians must imbibe the habit of verifying information in the public space to avoid been misled because the consequences can be quite depressing especially when it is realized that critical decisions have been taken on the strength of falsehood.”