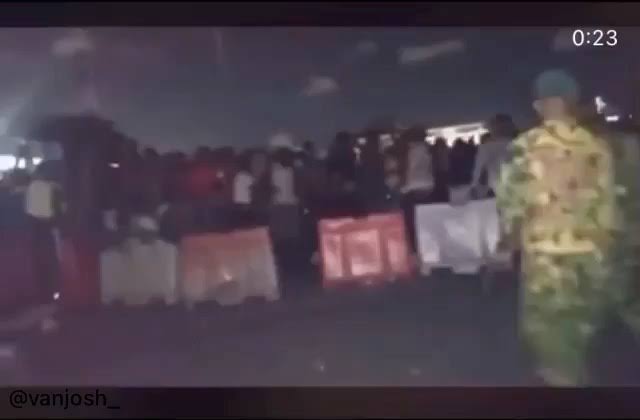 The Civic Situation Room on #ENDSARS Protests has urged Nigerians and the international community against hasty conclusion over the identity of gunmen who attacked #EndSARS protesters at Lekki toll gate, Lagos.

In its routine update on Wednesday by co-chairman, Uche John Madu, the situation room called for patience as proper investigation is carried out to ascertain the real identity of the culprit.

And while the Nigerian Army has since refuted being part of the civil exercise, Madu said it is wrong to drag the troops into the issue in the first place.

According to the situation room, there is every tendency that the said shooters are hoodlums sponsored to interrupt the protests.

It, however, urged Nigerians to stay away from the streets until the identity of those that hijacked the mass action to unleash violence have been successfully apprehended and kept away.

The Civic Situation Room finds it imperative to caution against hasty conclusions on the identities of the shooters in combat fatigue who caused pandemonium at Lekki Toll Gate in Lagos State on Tuesday night.

It became necessary to sound this note of caution because of the conclusive manners in which some news blogs have concluded that the shooters were troops of the Nigerian Army, something that has not been fact-checked.

The mode of operation leading to the attack, which involves the sabotaging of the Closed-Circuit Television CCTV) Cameras and cutting off of the power supply that would have illuminated the area raises questions as to the true identity of the shooters. The accusations and the counter-accusations following the incident have only further cast a shroud of obscurity around what transpired at this location.

While #EndSARS Protesters are claiming they were shot at by gunmen in combat fatigue and therefore concluded that they were shot by soldiers, others have reported that the gunmen might have been the anti-#EndSARS protesters impersonating the military to carry out the act. Another school of thought suggested that the real faces behind the protests costumed some people in military fatigue and had them shoot their protesters to make the government look bad.

Part of the explanation that has been offered is that the sabotaged CCTv and the disruption of electricity supply could only have been carried out by individuals that are desperate to hide their identities, which is not something that the Army would do.

The Civic Situation Room urges Nigerians not to jump to a conclusion about what happened at the Lekki Toll Plaza in Lagos but to allow to professionals investigate the incident and present their report.

It urged Nigerians to avoid going for the protests until it can be certified that the hoodlums that have been hijacking the mass action to unleash violence have been successfully apprehended and kept away.