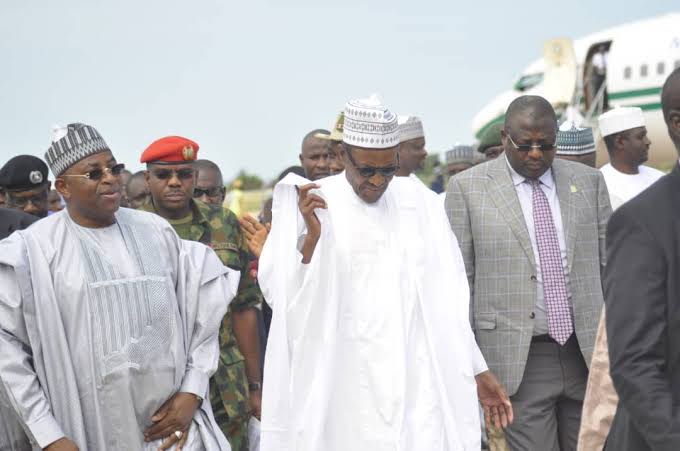 The group made this known in a strategic report to appraise emergency management after a thorough study of NEMA’s activities in the North-East with regards to crisis management.

In the report signed by President, Comrade Bitrus Ali on Sunday, the group hailed the Director-General for inch-perfect interventions in mitigating the suffering of internally displaced persons in the North-East.

The North East Peace Advocates observed NEMA’s strong presence in villages, communities, and hamlets, all thanks to Maihaja’s reforms structured in line with best global practices in disaster and emergency management.

According to the group, this wouldn’t have been possible without President Buhari’s willpower who has displayed an extraordinary commitment to addressing disasters and emergencies in Nigeria through the appointment of Maihaja.

The North East Peace Advocates, however, advised ministries, departments, and agencies in the country to emulate the accountability and transparency in NEMA’s operations.

While urging President Buhari to honour Maihaja, the group admonished the NEMA DG not to rest on his laurels.

Consequently, questions have been asked as to the effectiveness of the National Emergency Management Agency in the management of disasters and emergencies in Nigeria since the advent of the Muhammadu Buhari led administration in 2015.

It deployed a team of researchers to the three senatorial districts in Borno, Yobe, and Adamawa states with the mandate of assessing the situation on ground with regards to the emergency management and responses by NEMA to the humanitarian crisis in the region.

This research work spans seven months, and the researchers were mainly hampered by communication challenges that were overcome through the assistance of local tour guides.

The objective of Research:

The overarching aim of the Research was to examine the various interventions of NEMA in mitigating the suffering of internally displaced persons in North-East Nigeria as a result of the Boko Haram/ISWAP crisis.

In the course of the Research, across the three senatorial districts in Borno, Yobe, and Adamawa state, the unanimous verdict was that of excellent service delivery by officials of NEMA whose presence in the affected communities visited is paramount.

It was observed that NEMA officials were divided into teams in each community, and each team leader has the power to make quick decisions without having to wait for approval from the leader of the delegation at the local government level.

The same applies to the head of the delegation having the powers to make decisions without waiting for approval from the state coordinator of NEMA in the various states.

It was also observed that a regime of transparency and accountability is in place with the various monitoring and implementation mechanism put in place since the present Director General of NEMA came on board.

Our researchers were able to identify the emphasis on accountability in the discharge of their duties, and this much has seen to the rise of the effective management of the crisis in the region. The various initiatives employed by NEMA have a tremendous impact on the lives of those that have been affected by the crisis in the area.

It was also observed that NEMA has a strong presence in villages, communities, and hamlets. Most of the areas visited by our team of researchers had imprints of NEMA no matter how remote such settlements were.

There is also in place a feedback mechanism that assesses the operation of NEMA in every local government area, usually reviewed by NEMA officials from the headquarters, who routinely visits locations where NEMA is in operation. The director-general is also a member of the review and assessment committee.

The North East Peace Advocates upon completion of the research work comes up with the following conclusions:

That the director-general of NEMA has been able to institutionalize the process at NEMA, and this has seen to an enviable level of accountability and transparency in its operations.

The impact of NEMA in North-East Nigeria is indeed commendable given the manner its operations are structured in line with best global practices in disaster and emergency management.

That the director-general of NEMA has indeed displayed quality leadership strides that have affected the operations of NEMA positively.

That the preparedness of NEMA in addressing disasters and emergencies in North-East Nigeria is topnotch and should be replicated across the country.

That the administration of President Muhammadu Buhari has indeed displayed an extraordinary commitment to addressing disasters and emergencies in Nigeria through the appointment of a dedicated professional who has hit the ground running since assumption of office.

That the level of transparency and accountability in the operations of NEMA should be replicated in all ministries, departments, and agencies in Nigeria.

The North East Peace Advocates recommends that the administration of President Muhammadu Buhari continue in this fashion with regards to the operations of NEMA.

The director-general must not rest on his oars in ensuring that disasters and emergencies in Nigeria are adequately managed.

That the administration of President Muhammadu Buhari commends the director general of NEMA, Engr. Mustapha Maihaja for the excellent job he is doing in NEMA.