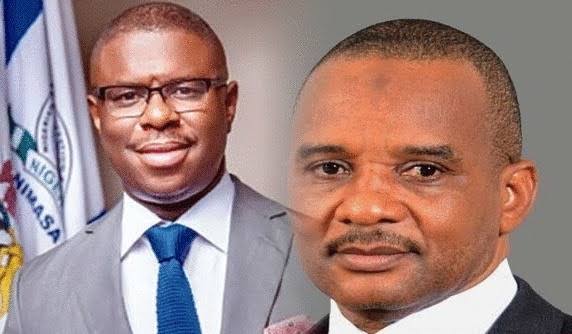 Following President Muhammadu Buhari approval of the appointment of Bashir Jamoh as the Director-General of the Nigerian Maritime Administration and Safety Agency (NIMASA), the ruling All Progressives Congress (APC) has said the appointment was based on competence and not nepotism as alluded in some quarters.

Reacting to the appointment on Friday during a chat with newsmen in Abuja, Deputy National Publicity Secretary of the party, Yekini Nabena, faulted the notion that the head of NIMASA must come from a particular section of the country.

The APC deputy spokesman, who expressed backing to the decision made by the President cautioned that people should not always have ethnic mind set whenever decision is taken by President Muhammadu Buhari.

“NIMASA is not the birthright of any state or geopolitical zone. In fact, a rundown of the heads of the maritime regulator shows that from inception when NIMASA was formerly the National Maritime Authority (NMA), heads of the organisation were appointed from different parts of the country. Dr. Bassey U. Ekong was the Director General in 1988. Alhaji Munir Jafar’ was replaced by Buba Galadima, who was NMA DG from 1996 to 1998. He was succeeded by John Egesi. Dr. George Mbanefo Eneh was appointed Director-General and was followed after a year by Architect Ferdinand Agu.

“Thereafter, Engineer Festus Ugwu was appointed and was followed by Mrs. Mfon Usoro. She was succeeded by Dr. Shamsideen Adegboyega Dosunmu. He was followed by Temisan Omatseye. In December 2010, Zaikede Patrick Akpobolokemi was appointed DG/CEO NIMASA. He was succeeded by Dr. Dakuku Adolphus Peterside. Recently, President Buhari approved the appointment of Bashir Jamoh as the Agency’s Director General.” Nabena disclosed.

The Bayelsa-born APC chieftain thanked President Buhari for appointing an experienced bureaucrat with a grounded knowledge of the maritime sector.

“We can all see the achievements of the president in the transport sector, Jamoh’s appointment further demonstrates government’s commitment to revamp the sector. Besides, Jamoh’s competence is not in doubt. With 32 years of professional experience in the transportation and maritime sector, he is currently the Executive Director for Administration and Finance at NIMASA. He is also the current president of the Chartered Institute of Transport Administration of Nigeria (CIoTA).

“He is an experienced bureaucrat who holds a PhD specialising in logistics and transport management, master’s degree in management from Korea Maritime and Ocean University and author of the book, Harnessing Nigeria’s Maritime Assets: Past, Present and Future. We should support any Nigerian with such wealth of experience to further reposition NIMASA after the efforts of the outgoing DG, Dakuku Peterside” Nabena stated.