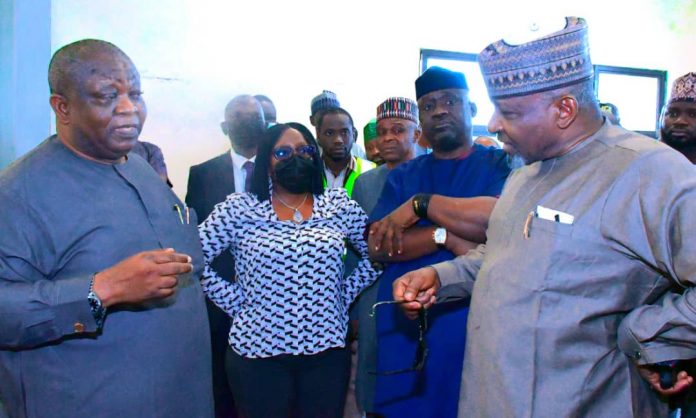 The Federal government has disclosed that it won’t resume train services along the Abuja-Kaduna rail corridor until all the kidnapped victims from the AK-9 train are reunited with their families.

Minister of Transportation, Muazu Sambo also added that the service would commence when the digital security systems that will monitor activities around the tracks are procured and installed.

The Minister who made these known in Abuja on Tuesday during an inspection of the Idu and Kubwa stations explained that resuming operations without rescuing those kidnapped will make Nigerians perceive the government as insensitive.

Train service along the corridor was suspended by the Nigerian Railway Corporation after an attack on the Kaduna-bound train on March 28th.

“Secondly, we must put in place adequateadequate security and infrastructural measures to protect and prevent all forms of threats that are possible and leave what we cannot do to God but everything humanly possible must be put in place to ensure that the reoccurrence of this nature is automatically eliminated forever.

“Technology can make that possible and we are trying to deploy the best technology available anywhere in the world that has served very well in other jurisdictions which we believe can also serve us very well in Nigeria.

“We are in the process of procuring the sensors and that is why I said we must ensure that we put in place every infrastructure that will ensure that lives are safeguarded.

“So, the technology that is going to be deployed is such that you can perceive a threat and eliminate it before you get to the location. That is being proactive.”

“So, this administration completed it and it’s running it. It is really unfortunate that what happened happened but we must not let that deter us from providing succour to Nigerians.

“The best way to travel as far as I am concerned is by train and by the grace of God, we will make sure these services resume but not until those things I mentioned have been achieved.

“Rescue or reunion of those that have been kidnapped with their families and put in place technology that will ensure that threats to lives are eliminated.”

The minister also dismissed claims that NRC staff that were onboard the train have been abandoned.

He said: “It is totally unfounded. They are members of staff of the NRC. It will be highly unexpected that a member of your own family is affected in an incident and you have not gone to the family, you have not done the necessary steps to comfort them. It is not possible.