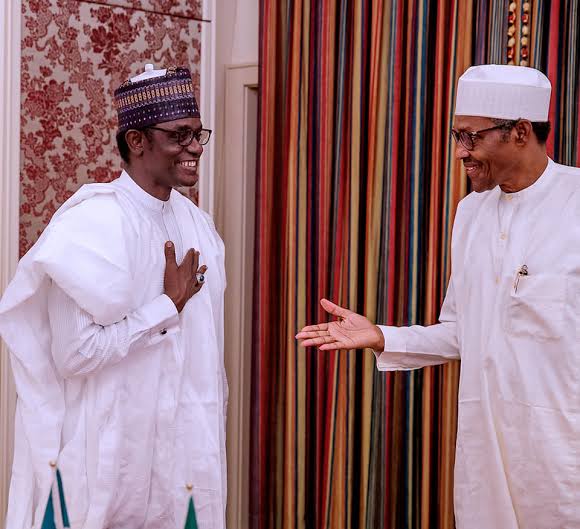 The All Progressives Congress, (APC) Network for Change has lauded President Muhammadu Buhari and Governor Mala Buni of Yobe State, for bringing terrorist activities in Yobe State to an end.

In a statement signed by its National Coordinator, Comrade Alih Lukman, on Tuesday, the group said terrorists and terrorists activities have almost been completely exterminated in Yobe due to the commitment shown by President Buhari to end the scourge and the cooperation received from Buni.

“We call it a partnership because the kind of support the President is receiving from the Yobe State Governor is total and unhindered which has resulted in the complete change of the otherwise tense security situation in the state.

“We now have a Yobe State that is not only peaceful and calm but on a fast track towards infrastructural development,” the group stated.

The APC Network observed that while the president has continued to sustain efforts at restoring peace in the state by equipping the military, the Governor on his part has continued to complement the efforts of the central government by ensuring that resources earmarked for projects are utilized for the purpose.

“We are aware also that thousands of youths in Yobe State have been empowered and given interparental skills which have reduced crime and improved social life in the state.”

The Network said it is excited that in just five years of President Buhari in office and only one Year of Buni, such level of partnership could be attained to the extent that the threats of insecurity that once plagued the state are gone for good.

The Netwoks said President Buhari by making the issue of security a major priority of his government, has given the military the needed push which has translated into the peace and calm being experienced in many parts of the Northeast including Yobe.

The Network said Governor Buni, by making youth empowerment the central theme of the policy of his administration, has, on the other hand, made it impossible for terrorists to find willing tools to recruit informants or fighters among them.

It said though the formation of Boko Haram has been traced to a small community in Yobe State, the commitment shown by Governor Buni is a clear demonstration that terrorism could be defeated if the right approach is adopted.

The Network noted that any time the military succeeds in an operation against the insurgents, the Yobe State governor, to show appreciation, is first to commend its efforts and that of the President whether the governor is in the country or not.

It recalled that in January when the military neutralised scores of Boko Haram terrorists, Governor Buni commended the military authorities and charged the troops to adopt new strategies in order to finally get rid of the Boko Haram menace.

“He particularly applauded the efforts of security operatives working under Sector 2 Operation Lafiya Dole of the Nigerian Army for recording tremendous success in the fight against Boko Haram across Yobe State and advised the security agencies to  make the war against insurgents population-centric, by involving local people in sourcing information regarding security situations in local communities.”

The Network said the Yobe State Governor also praised Nigerian soldiers for successfully repelling a Boko Haram attack on the state capital, Damaturu, in December 2019 and expressed happiness with the President for help in thwarting the evil intentions of the insurgents while calling on residents to give maximum support to security forces by providing useful information.

“We are also aware that the Governor is talking to other stakeholders in the state, such that while the Federal Government is doing its part through the security agencies, the Governor is also doing his part talking to the relevant persons to give the youths the right orientation.

“This is what we have been asking political leaders and other stakeholders to do to support the military and we are happy that someone has picked up the initiative and the result is there for all to see.”

The Network called on other governors and political leaders to emulate Mai Mala Buni in giving their total cooperation to the President and to engage the youths in their states in productive activities.

Said the Network: “When the youths are given the right orientation and are engaged in productive activities, the tendency to be attracted to vices and terrorist activities would be reduced.

“The Yobe State governor is doing the right thing, governors whose states have been ravaged by Boko Haram have no option but to give their full cooperation to the President as Governor Buni is doing.”