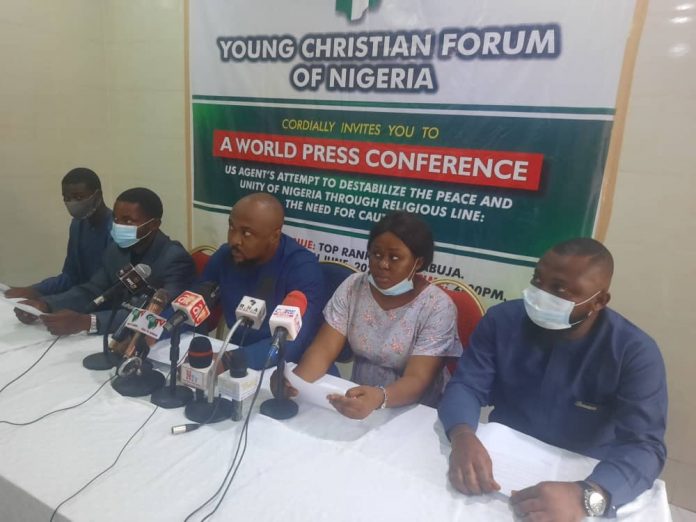 The Young Christian Forum of Nigeria (YCFN) has rubbished a report by the former United States Secretary of State, Mike Pompeo, wherein he alleged that 1,500 Christians was killed in the last six months.

The group, in a statement signed by its Secretary-General, Roland Effah, on Tuesday said no Nigerian was persecuted for their religious belief as claimed by Pompeo.

Describing the report as misleading, the YCN noted that the motive is to cause religious disharmony in the country, pitting Christians against other groups.

Effah said by this action, Pompeo has displayed his bias and irritability with the administration of President Muhammadu Buhari in its efforts so far at ensuring religious harmony in Nigeria.

According to the Christian forum, Mike Pompeo is out on a slander campaign, given that any empirical evidence cannot back his position.

The group, therefore, advised Pompeo to consult religious stakeholders in the country whenever he feels the urge to contribute to the discourse about Nigeria and desist from illogical conclusions.

It warned the ex-US Secretary of State and his co-travellers to desist from their despicable plot as Nigerians are not that gullible not to see the handwriting on the wall.

The group, however, urged Nigerians to rise in defence of their county in these trying times and not allow despicable elements to succeed in sowing the seed of discord amongst them.

The leadership of the Young Christian Forum of Nigeria warmly welcome all and sundry to this press conference converged in light of the recent report released by Mike Pompeo, a former secretary of state of the United States of America, wherein he mischievously alleged that Christians in Nigeria had been targeted for extinction, adding that the administration of President Muhammadu Buhari, is not doing enough to protect religious freedom.

The Young Christian Forum of Nigeria views such allegations as a collective insult of the sensibilities of the various religious groups in Nigeria because the report is laced with mischief and a well-orchestrated attempt at puncturing religious harmony in Nigeria.

A critical look at the report reveals that Mike Pompeo ventured into an area he lacked adequate knowledge. It is, therefore, bemusing that a former high ranking official of the United States of America could issue such a misleading report without minding the consequences of his actions on the psyche of the adherents of various religious groups in Nigeria.

Thus, our considered opinion that Mike Pompeo has, by his action, displayed his bias and irritability with the administration of President Muhammadu Buhari in its efforts so far at ensuring religious harmony in Nigeria.

The Young Christian Forum of Nigeria also frowns at the deliberate attack on the Muhammadu Buhari led administration, where he alleged that the Buhari administration had suppressed the news of the killings of Christians by masking it as a farmer-herder crisis. This is unfortunate.

Our position remains that Mike Pompeo is out on a slander campaign, given that any empirical evidence cannot back his position. Instead, a display of ignorance and playing to the gallery with an issue of such sensitivity.

Mike Pompeo is hell-bent on sowing the seed of discord amongst the various religious groups in the country for reasons best known to him and his paymasters for whatever it is worth.

The Young Christian Forum of Nigeria uses this medium to send a message to Mike Pompeo that he can’t be more Nigerian than Nigerians. He should do well to cross-check information gleaned from blogs and his paid foot soldiers to preserve whatever is left of his reputation.

The Young Christian Forum of Nigeria wishes to advise Mike Pompeo to devout more time and energy in studying the history of the farmers-herder conflict in Nigeria to realise that it predates the Muhammadu Buhari administration. He must also do well to recognise that the press in Nigeria is vibrant, and there is no way such killings can go unreported, as he has alluded in his mischief laced report.

Consequently, the Young Christain Forum of Nigeria wishes to state unequivocal terms that no Nigerian has been denied their rights to religious beliefs or practice, nor are Nigerians persecuted because of their faith.

As members of that critical constituency, it is vital to remind Mike Pompeo to consult religious stakeholders in the country whenever he feels the urge to contribute to the discourse about Nigeria. He should desist from illogical conclusions and outright insinuations as in this case.

The Young Christian Forum states that from all indications, the overarching objective of Mike Pompeo is causing religious disharmony in Nigeria, which in our considered opinion has been on the cards since his stint as the Secretary of State in the former administration in the United States of America.

We, therefore, wish to warn Mike Pompeo and his co-travellers to desist from their despicable plot as Nigerians are not that gullible not to see the handwriting on the wall. We also advise that they channel their energies and resources towards more charitable ventures that would impact positively rather than negatively.

As critical stakeholders in Nigeria, the Young Christian Forum of Nigeria debunks the allusions made by Mike Pompeo in his report as there is no iota of truth in it. It, therefore, remains a figment of his imagination.

We, therefore, urge all religious groups in Nigeria to continue to have religious tolerance as the watchword in our quest for sustainable growth and development. We must resist the urge to fall for the disjointed narrative pushed forward by the likes of Mike Pompeo, who are ignorant and mischievous in their public posturing.

We as Nigerians must rise in defence of our county in these trying times. And never shall we allow despicable elements to succeed in sowing the seed of discord amongst us.

We thank you for your time and attention and urge you all to take this message of hope to your various constituencies. May God continue to bless Nigeria and protect us from our adversaries from near and far.