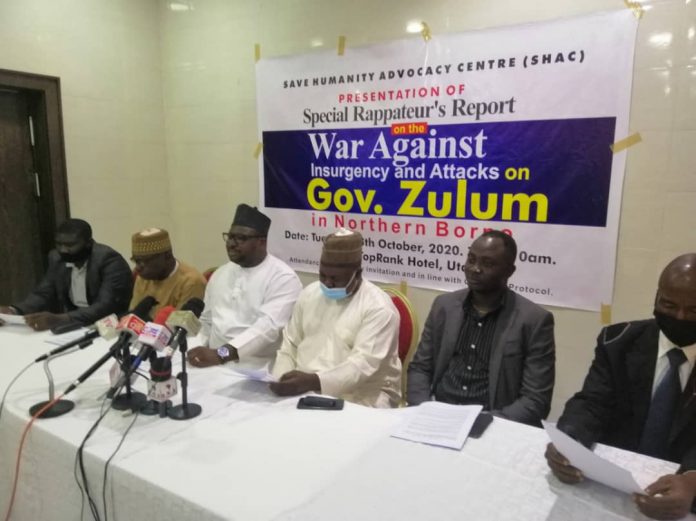 A special rapporteur has blamed poor infrastructure for the continous presence of Boko Haram terrorits in northern Borno and recent attacks on the convoy of Governor Babagana Zulum.

Professor Philip Daheeda of the Department of Public Administration, University of Abuja, made this revelation in a detailed report on behalf of the Save Humanity Advocacy Centre (SHAC).

Daheeda said it uncovered the actual circumstances surrounding the attack after leading the SHAC together with other credible non-governmental organizations and civil society organizations on a fact-finding mission to Northern Borno.

Speaking at a press conference on Tuesday in Abuja, Prof. Daheeda said the troops have made substantive progress in the north of Borno, particularly the Kukawa/Baga axis once regarded as the epicentre of the Boko Haram insurgency due to its proximity to the Lake Chad Basin.

He further disclosed that the radical sect has been significantly incapacitated and have now turned to guerrilla tactics, planting Improvised Explosive Devices (IED) on routes frequently used by IDPs returning to their communities.

Daheeda, however, admitted that the poor state of roads has made it possible for the terrorists to plant the IEDs, plan attacks and unleash mayhem on citizens, such as the governor.

The special rapporteur, therefore, urged the state government to compliments the efforts of the military through the provision of necessary infrastructures such as road constructions, provision of electricity and other facilities that would aid their operations.

In light of the recent attacks on the convoy of the Governor of Borno State in Northern Borno state, the Save Humanity Advocacy Centre (SHAC) in collaboration with some credible Non-Governmental Organizations as well as some Civil Society Organizations commissioned an investigative panel to unravel the circumstances that led to the attacks to put issues in proper perspectives.

The investigative panel consisted of a special rapporteur and other representatives with a mandate to physically visit Borno State and collate information on a first-hand basis. The core area of assignment includes but not limited to close interaction with citizens in Borno state, stakeholders, state actors and the media on the activities of the Boko Haram insurgents in Northern Borno state.

The investigative panel consequently visited Northern Borno, especially the Kukawa/Baga axis where it was alleged that the attacks on the convoy of the governor took place.

The findings from the investigative visit are reproduced after extensive scrutiny of the facts presented through a multiple channel mechanism put in place to ensure objectivity and accuracy in fulfilment of its overarching objective.

The governor of Borno State, Babagana Zulum in its efforts at assessing the relocation of Internally Displaced Persons back to their communities have been visiting liberated communities in various parts of Borno state. On a couple of occasions in recent times, the convoy of the governor was attacked, which indeed ignited rounds of commentary in the country with regards to the efforts of the Nigerian Military in its efforts towards ridding Borno State of Boko Haram elements, especially in Northern Borno state.

The investigative panel as a result of the aforementioned undertook a trip to Baga and environs, wherein extensive consultations and interactions were made with all stakeholders in the theatre of operations.

It was clear from all that was gathered that the Nigerian Military has made substantial gains in addressing the Boko Haram threats in Borno state as a whole, and specifically in the Kukawa/Baga axis which is regarded as the epicentre of the Boko Haram insurgency due to its proximity to the Lake Chad Basin region where Nigeria shares boundaries with Chad and some francophone counties.

This fact was enforced with a strong presence of security operatives which were seen on constant patrol of the region and making advancement towards the fringes of the Lake Chad Basin region where it is believed houses a seizable number of Boko Haram insurgents after their displacement from their operational headquarters in Sambisa forest, as well as other areas in North-East Nigeria where they hitherto held sway.

It is indeed a statement of the fact that the Boko Haram group has significantly been incapacitated and they have consequently employed the use of guerrilla tactics that involve the planting of Improvised Explosive Devices (IED) on routes frequently used by IDPs returning to their communities as against their known strategy of engaging the Nigerian Military in exchanges of gunfire.

There was also an absence of infrastructures in Kukawa/Baga axis as virtually all roads were impassible due to years of neglect which inturn emboldened the Boko Haram insurgents to freely plant IEDs as they made their way towards the fringes of the Lake Chad Basin region.

It was also revealed that the state of the roads indeed enhanced terrorist activities in Northern Borno as a whole where pockets of Boko Haram activities still thrives. There was also a dearth of other infrastructures such as communication masts, electricity water and other necessities in most parts of Northern Borno state, which the Boko Haram group has taken advantage of in the furtherance of their nefarious activities.

The investigative panel also discovered that the bulk of the casualties recorded during the attacks on the governors’ convoy were mainly as a result of IED explosions and not gunshot injuries as widely reported in the media. And the bad road network in Baga and environs is indeed responsible for the casually figures as commuting the injured to the nearest medical facility was as well daunting the number of deaths recorded.

The efforts of the Nigerian Military in addressing the Boko Haram threats in Northern Borno state cannot be overemphasized. The Boko Haram group have significantly been degraded with the Military constantly on their trail into the fringes of the Lake Chad Basin region.

The state government also has a responsibility to the task to various stakeholders in Borno state and Northern Borno to be precise on the need to galvanize support for the operations of the Nigerian Military in the quest to rid Northern Borno of the activities of Boko Haram insurgents.