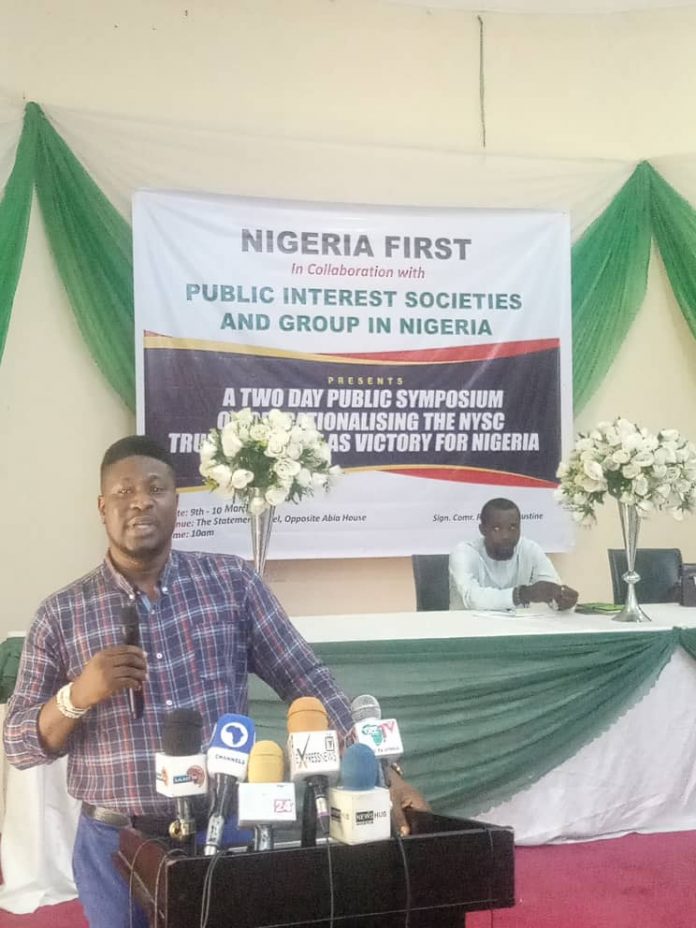 A University Don, Dr Okpe Okpe has once again reiterated the need for the urgent passage and assent to the National Youth Service Corps Trust Fund Act.

Okpe who spoke in Abuja at a public symposium on the operations of the Act said its urgent assent would serve as a panacea for insecurity and national disintegration.

He added that it will assist in curbing incessant cases of ritualism in the country.

The symposium was organised by the Nigeria First in collaboration with several interest groups.

Okpe said the fund when in place will address financial constraints in training, orientation camp development, provision of sundry welfare and also mitigate the problem of employment in the country through the provision of capital to the corps members to establish their businesses.

The group called on President Muhammadu Buhari, national assembly and relevant stakeholders to join the NYSC in making sure the bill is passed and signed into law within a short time due to its importance in equipping the NYSC for more service to the country.
While applauding the national assembly for considering the NYSC Trust Fund Bill, Okpe said, “Our fervent prayer is that the bill will not only receive expedited passage but will also receive presidential assent, It is also our hope that the trust fund will provide permanent solution to the unemployment
“Let me sieze this opportunity to commend the current director-general of the NYSC Maj. Gen. Shuaibu Ibrahim for initiating the idea of the Trust Fund, the fund will provide a sustainable source of funds for the NYSC, skill acquisition training and provision of start-up capital to corps members, train and retrain the personnel of the NYSC, develop camps and the NYSC formations and provide facilities therein.
NYSC Trust Fund when passed into law will also improve the general welfare of not only corps members but the general youth and unemployed Nigerians by extension, which will help in promoting national unity, integration, self-reliance and accelerated development of the national economy,” he added.

Nigeria First Convener, Richard Augustine in his welcome address said the nation needs to build an economic model where business ideas will not be killed but nurtured into business empires; where men and women of skills shall realize their dreams and potentials.

“The youths have to be encouraged to strive collectively to end poverty, hunger and deprivation in the land using instruments such as the planned Youth Fund.

“NYSC Trust Fund, on its final stage of becoming an Act, it is actually meant to address inclusive growth in Nigeria and this fact was well canvassed during the public hearing on the Bill held on Thursday, February 24, 2021. At the said public hearing, the Director-General of NYSC, Major-General Shuaibu Ibrahim informed the nation that the Bill sought to address the infrastructural deficit in the orientation camps, ensure adequate provision of other operational logistics, as well as address the problem of graduate unemployment in the country. Moreso the President has promised the Nigerian youths of leaving a legacy behind and he is always ready to append his signature on the bill if brought to his table.

“Consequently, the appreciation goes to the leadership of the National Assembly for show commitment and proving to be on the side of the Nigerian people, our appeal also goes to all friends of the scheme, including influential public figures, civil society organizations, students’ bodies, members of the academia and media practitioners, to continue the clamour as the bill is before the Senate for conclusion and make it an Act of backed by law.

Now that the bill is before the Senate at it last stage, the lawmakers should put their seal on the revolutionary legislation. There is no doubt that when the NYSC Trust Fund becomes operational, the number of corps entrepreneurs will increase drastically, and they will in turn help to provide jobs for millions of other youths of the country. This will equally help to reduce the issue of security challenges faced in the country.

“It is instructive to note that majority of the lawmakers are products of the scheme as most of them are graduates of tertiary institutions who have participated in the scheme. From their varying and variegated experience going through the scheme, they will agree that corps members are grossly underutilised and one sure way of unleashing the real potential of the corps members is to empower them to be able to acquire new skills and put to use their training.

digitization and ICT. The nation will be killing many birds with just one stone with the NYSC Trust Fund – indirectly building digital economy, digital ecosystems, digital entrepreneurs, and many more since the youths cluster there.The effect of the Fund is predictably foreseeable. Nigerian youths are creative, resilient, upwardly mobile and ambitious. Yes many will fall by the wayside but a greater majority shall grow through that intervention and become self-made, self-reliant and more importantly, employers of labour in no distant time. That is the big picture that should form the allure for the lawmakers. If for instance the NYSC scheme were a school, Nigerian graduates under 30, by graduation they are all alumni. Those of them in the House of Reps at the moment should consider themselves alumni and pass the Trust Fund Bill into law as a way of giving back to the institution, which made most of them.

The NYSC scheme has grown into an enviable and equitable brand to the point of becoming a mentor and model for similar budding youth schemes in some African countries. What this means is that the NYSC is not of prime importance to Nigeria but also to some African countries. These countries have copied the scheme from Nigeria for its great achievements. Such countries are also waiting in the wings to further learn how Nigeria is reinvigorating the scheme of which the coming Trust Fund is one and will key in as usual” he added