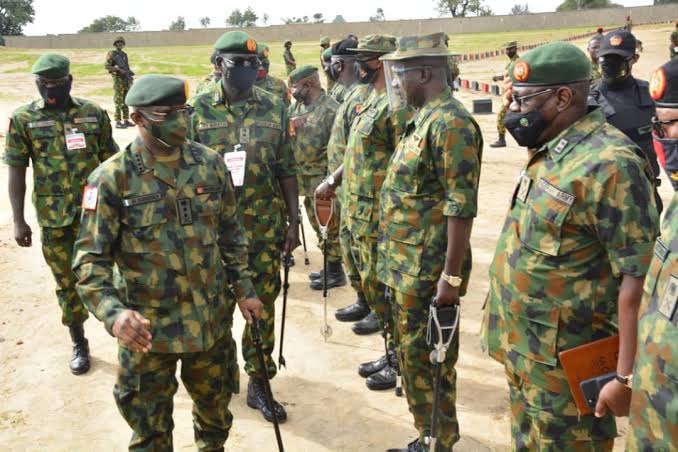 The Arewa Crusaders Against Banditry (ACAB) has hailed the Chief of Army Staff (COAS), Lt. Gen. Tukur Buratai and troops for the rapid success of Operation Sahel Sanity in the northwest.

ACAB said the Nigerian Army has so far exceeded expectations, returning normalcy to the once-troubled region, particularly in Zamfara and Sokoto States.

While launching the exercise in Faskari, Katsina State, in July, the COAS pledged to comprehensively tackle banditry and other crimes in the region and other parts of the country.

And barely two months after, the Arewa Crusaders Against Banditry said the exercise is already yielding dividends aplenty, with hundreds of bandits killed and many others injured.

Speaking on behalf of the group on Tuesday, Mallam Idris Gambo said the north is proud of the COAS and troops’ modest achievements in such short period.

“The Arewa Crusaders Against Banditry is aware of the leadership strides of the Chief of Army Staff, Lt. Gen. Tukur Buratai. This is evident in the exploits of Troops of Operation Sahel Sanity deployed at forwarding Operation Base Sabon Birni LGA of Sokoto State, where it smashed a notorious illegal arms smuggling syndicate who specializes in massive arms supply to bandits in the North West from across the international borders,” the group said.

“This feat is a further testament of the level of dedication by the troops of the Nigerian Army whose morale have been boosted by the innovations introduced in the operations of the Nigerian Army since the appointment of Lt. Gen. Tukur Buratai as Chief of Army Staff by President Muhammadu Buhari.

“The various successes of Operation Sahel Sanity has further reaffirmed the confidence of an overwhelming majority of Nigerians in the Muhammadu Buhari led administration and the military to be able to arrest the activities of criminal elements that dare the peace of the citizens in North-West Nigeria, as well as other parts of the country.

“Our appreciation goes to the Chief of Army Staff, Lt. Gen. Tukur Buratai for leading the Nigerian Army most professionally despite the numerous operational challenges associated with conducting many operations across the country simultaneously.

” Our appreciation also goes to the troops that have been dedicated and steadfast in the trenches, ensuring that the enemies of Nigeria are not allowed to disrupt the peace of the country through their nefarious activities.”

The Arewa group also hailed the citizens of Zamfara and Sokoto for supporting the Army in its quest to rid their states of bandits and other criminal elements.

It said the success of the Operation Sahel Sanity should serve as a wakeup call to other states on the need for synergy.

” The Arewa Crusaders Against Banditry herby state that Zamfara State and its citizens have shown that the quickest way to defeat any insurgency is by collaborating with the security agencies while shunning conspiracies and sabotage that will ruin the efforts of the military,” the statement added.

“The political authorities by this action have indeed set a worthy example for other states experiencing acts of criminalities as the task of curtailing the activities of criminal gangs is not for the security agencies alone, but rather that of active participation and collaboration of all stakeholders including the citizens.

“We wish to state that this statement of fact must be the watchword moving forward as we are all expected to join forces with the Nigerian Army in ensuring that all parts of Nigeria is safe for all concerned in our quest for sustainable peace and development.

The group, however, called on all Nigerians to continue to show solidarity with the COAS and the troops in their various operations across the country.

“We consequently wish to state that there are worthy lessons to be learnt and emulated as provided by the Zamfara and Sokoto examples. Nigerians must also develop the habit of appreciation of our troops that have been engaged in the task of keeping Nigeria safe and secured at every point in time.

“The Arewa Crusaders Against Banditry enjoins Nigerians from all walks of life to see the Nigerian Army as partners in progress and as well inculcate the habit of appreciating their invaluable sacrifices in the war against criminal elements that are bent on seeing to the regime of sorrow, tears and blood.

“The Arewa Crusaders Against Banditry wishes to state that it is not yet Uhuru, as the task before us requires continued cooperation from all and sundry in North West Nigeria as well as other parts of the country. This is true must be seen as a collective endeavour, rather than the responsibility of the Nigerian Army alone.”