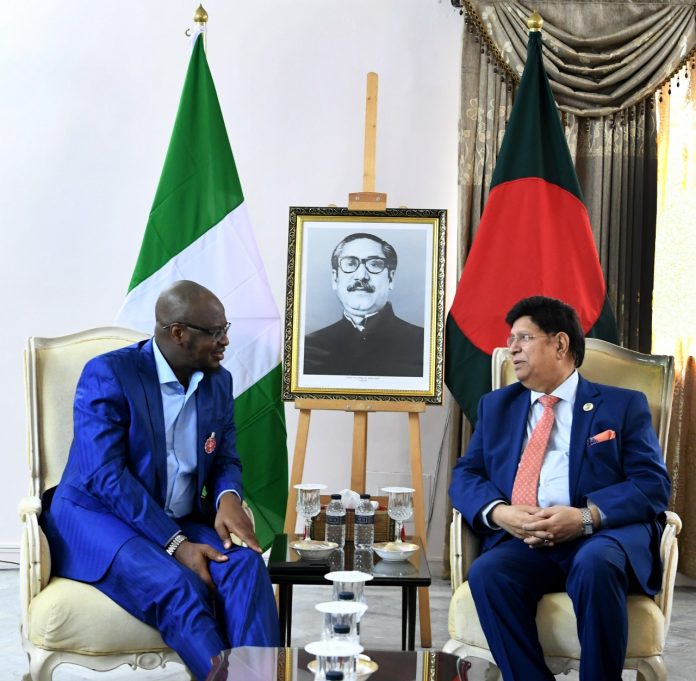 The Nigerian delegation will have several meetings with government sectors like ICT Division, BTRC, Secondary and Higher Education Division, NEC, Ministry of Textiles and Jute, BIDA, BEZA and private sector representatives like Beximco, BGMEA and FBCCI. Today, the delegation visited Father of the Nation Bangabandhu Sheikh Mujibur Rahman Memorial Museum in the evening and paid tribute.

The delegation met with Foreign Minister Dr. A K Abdul Momen, MP at State Guest House Padma. During the meeting, the Foreign Minister welcomed the first ever such multi-sectoral delegation to Bangladesh. Dr. Momen cited the remarkable achievement of Bangladesh during the last decade in the socio-economic sectors including women empowerment. He informed that Bangladesh is maintaining robust economic growth in spite of the existing global economic crisis. Dr. Momen briefed the Nigerian delegation about Bangladesh’s performance in digital sector especially, in the rapidly growing IT sectors and opportunities in the Bangladesh Hi-tech parks.

The visiting Nigerian Minister referred to the remarkable achievements of Bangladesh in agriculture and other sectors. Mr. Pantami proposed that both countries may collaborate in freelancing areas and digital services such as national Identification documents.

Both sides agreed to explore possibilities of contract farming in Nigeria by Bangladeshi farmers as well as collaboration in agro and food processing.

At the meeting, Dr. Momen pointed out that D-8 countries should accelerate efforts to increase mutual trade. He sought continued support of Nigeria on Rohingya issue.

The Nigerian Minister also had a brief discussion with State Minister Md. Shahriar Alam, MP when both sides reflected on ongoing bilateral cooperation, especially, the need of enhancing people to people contact.

Earlier in the day, Mr. Pantami had a bilateral meeting with Commerce Minister Tipu Munshi, MP. The Commerce Minister hailed the Nigerian delegation in Bangladesh. He referred to the traditional relations between Bangladesh and Nigeria. He mentioned that the mutual trade between Bangladesh and Nigeria is steadily growing and Bangladesh government is making efforts to augment trade and commerce with Nigeria. Mr Tipu Munshi commented that huge potentials lie for cooperation in economic areas like manufacturing and garments industries. He underlined the importance of more contacts among the chambers and businesses of the two countries and suggested formation of a joint business council. Mr. Tipu Munshi referred to vision of the government for achieving a Smart Bangladesh by equipping the population with the digital knowledge.

Mr. Pantami praised the excellent economic growth of Bangladesh under the able leadership of Prime Minister Sheikh Hasina. He cited Bangladesh’ excellence in IT and garments sectors.