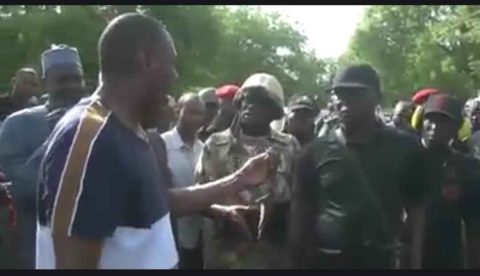 Human Rights Activist, Comrade Isaac Ikpa, has described the current peace and security being enjoyed in parts of Borno State as comparable to what is obtainable in Rome and other peace capitals of the world.

Ikpa said he is making the comparison based on what has been achieved in terms of peace and security in the southern parts of the state and some major towns in the state where peace has returned.

The activist, who is currently on a tour the Northeast with a non governmental organisation, said what he has seen in areas that have suffered the worst forms of attacks by Boko Haram and ISWAP terrorists has rekindled his confidence in Nigeria and the President Muhammadu Buhari led administration.

Contributing an interim report of his findings while assessing the level of normalcy that has returned to the crisis ravaged state, Ikpa said it is unbelievable that within a short period of time, that peace and normalcy would return to certain parts Borno State to the extent that people do not consider threats by insurgents as something to be worried about anymore.

Ikpa said the general climate in Borno South senatorial zone is that of peace, hope and confidence as against the impression that people of the state living in fear.

The activist said from what he has observed, it is the insurgents that are now living in fear as they are constantly on the run living in bushes and taking to their heels at the slightest view of troops.

He said the people of Southern Borno State from what he has seen so far, consider the Boko Haram terrorists as mere irritants who have been placed where they belong by the Nigerian military.

“That fear that people usualy have when Boko Haram is mentioned is no longer there. “The military has demystified the group and exposed them to be a group of rag tag urchins seeking relevance.

“The days when people run to hide when the hear the name of Boko Haram is over with the coming of this administration coupled with how they’ve been degraded and subdued, the people have seen them in their sorry state and no longer fear them but even pity them,” he stated.

The human rights activist said residents of the state capital of Maiduguri, are now living a typical example of how to ignore irritants.

“They go about their normal business with calmness that you begin to ask yourself whether you’re in Borno State.

When I spoke with some of the people to know where they derive their confidence from, I got to understand that they have come to realise the insurgents are not what they claim to be going by the defeat they have suffered in the hands of the military in recent times.”

Comrade Ikpa said his visit to Chibok, Damboa and Askira Uba which were some of the worst affected areas has revealed to him the extent of the sacrifice made by the Nigerian army to protect the territorial integrity of the country and the success recorded.

He said, “These are areas people dare not go as the insurgents had a at time taken over them and were exercising control over them as if it was their country.

“But go there now and see how the military has secured the place by stationing men and officers in strategic positions.”

He said places like Gwoza and Biu which were equally being threatened by the insurgents in the past cannot remember the last time they lost sleep as a result of insurgency.

“The people of Gwoza, if you remember very well, even came out to applaud Nigerian troops when  they were passing by as a result of the sacrifice they made to liberate them from the insurgents.”

He called on the people of the other parts of the state to emulate the people of Southern Borno and extend a hand of coperation to the military.

The activist is also of the opinion that if the people of the other zones can call on the insurgents to surrender, they would listen to them and lasting peace would return to the state.

“They’ll listen to them because they’re their people and in order for the state to reclaim its glory as the Home of Peace,” he stated.

Comrade Ikpa lauded the military for their efforts in the Northeast and Borno in particular saying they have won back the confidence of the people and prayed they be rewarded for their efforts.

He also acknowledged the contribution community leaders in the state saying without their coperation not much would have been achieved in sustaining the peace.

He commended the Buhari administration for doing all in its power to restore the entire country back to normalcy and the much achieved in that regard.

“Buhari on inauguration as president, promised Nigerians three things and one of them is to improve on the security situation in the country and I think he has achieved that with what I have seen in Borno,” Ikpa concluded.