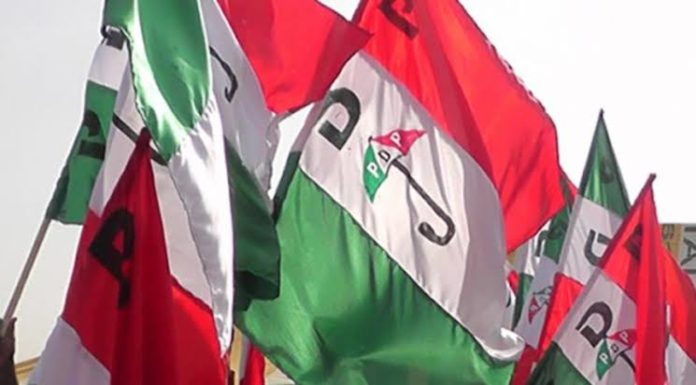 A group known as the Peoples Democratic Party National Solidarity Vanguard (PDP-NSV) has distanced itself from any conspiracy or action geared towards truncating the nation’s democracy.

The group made its position known at a press conference on Tuesday in Abuja to address some utterances by the PDP on sensitive national security issues.

In a statement signed by its National Coordinator, Alhaji Shehu Sani, the group said it can not be part of conspirators in oblique plots against the dismemberment of Nigeria.

In the spirit of healthy opposition politics, however, the group denounced itself from “ such shadows emanating from either the party itself or any member”.

It further pledged support for President Muhammadu Buhari, who according to them has planted a bridge between ethnic and religious lines in the country and so far curtailed insecurity after recovering territories that were taken by insurgents.

Ladies and Gentlemen of the Press.

Please accept our profound gratitude for responding to our invitation to this media chat. It has become necessary for us to clarify the air by speaking to Nigerians on certain perceived recent wrongs, actions and utterances which have tended to tilt or constitute potential dangers to the corporate existence of our beloved nation, Nigeria.

Members of the PDP National Solidarity Vanguard (PDP-NSV) have observed with dismay and consternation the persistent unguarded, inciting and uncouth public utterances and statements by a select few members of our party- the PDP on sensitive national security issues. We deem such abhorrent outbursts as alien to our national culture and ethics of universal brotherhood.

We consider these reckless statements directed at the APC-led federal government of President Muhammadu Buhari, on his handling of insecurity issues especially resurgent acts of violence and deaths. The vitriols of the incumbent Government are imbued with unconcealed and unjustifiable hatred, deliberate venom and beyond the threshold of the expression of genuine concern about the predicament of Nigerians trapped by rampaging merchants of deaths in some parts of the country.

PDP-NSV infinitely frowns at such barbaric acts of heartlessness and undisguised appetite or preference for violence and bloodshed in parts of the country in the guise of opposition politics. We are extremely worried at the constancy of such misguided and instigative statements from some members, and more so, at a time of grave national tragic incidents, which should inspire sober reflection and grief by their sheer capacity to activate greater violence and anarchy.

Such inclination is inconsistent with our orientation and ore national values as a political party. Like us, most Nigerians are worried that the disposition of some PDP chieftains on matters of resurged attacks, unmitigated violence and deaths in select areas unwittingly admit to the public that the party as a congregation of respected Nigerians is incidentally infested with people excited at bloodletting and unnecessary heating of the polity at the detriment of Nigerians.

Certain irresponsible utterances over a sensitive matter of national security such as spearheaded and reflected in January 2020 debate in the plenaries of both chambers of the National Assembly (NASS) or the isolated remarks of PDP chieftains and loyalists with same tenor, pricks the conscience very hard towards our collective culpability. And it invokes a sturdy feeling that we are people working behind the scenes to create, worsen and accentuate Nigeria’s dilemma of renewed insecurities.

Such undignified acts by some members bear semblance with the general suspicions of Nigerians and President Buhari that PDP is the masked force behind resurgent insecurity atrocities in some areas in Nigeria and the excited feasting on the blood of the innocent. Of course, we all know this position is untrue, but unfortunately, the reckless flippancy of some members strongly alludes to it. This is not encouraging and those concerned should desist.

PDP-NSV believes that all of us cannot be smeared in the same basket because we ascribe to one political party. We believe in decent opposition politics, which respects responsible values, the indivisibility, oneness, peace and security of Nigeria. We cannot be party to or affiliate or align ourselves with any covert or overt force incensed or tempted to work in antithetical position with the stability of Nigeria.

Therefore, we denounce and dissociate ourselves from such shadows emanating from either the party itself or any member who indulge in such reprehensible and repulsive actions or utterances.

The Republic of Iran, and its allies like the Republic of Turkey whose shadows are traced in sponsoring the festering of Boko Haram/ISWAP terrorism in Nigeria should not attempt to destroy our party by making some members of the PDP planks for actualizing this satanism. Henceforth, we are prepared to checkmate and resist them with all our might.

We state it clearly to all and sundry that PDP-NSV will neither spare a thought nor hesitate to expose any of our member who is discovered to be enmeshed and in alliance with external forces in plots to destabilize Nigeria. Or disguisedly supporting or sympathizing with acts of violence and deaths designed to cause possible disintegration of Nigeria.

The PDP-NSV wishes to lay bare the fact that majority of members of the party are in support of a united Nigeria and in full support of what Mr. President has done so far to curtail consuming insecurities in the country. We therefore, extend our unreserved cooperation and support to him in the quest of ridding Nigeria of any form of security threats for peace and unity.

Mr. President’s determined and courageous war against terrorism and insurrections are commendable and appreciative. In truth, had the PDP done half of what President Buhari has accomplished on security, and still doing, when our party controlled political power at the center for 16 years, Nigeria would have extricated itself from this mess a long time ago.14.

Let’s humbly admit and accept the unchangeable reality that the then PDP Government did not do half of what Mr. President has done towards fighting Boko Haram and other armed criminalities in the country. Whilst the PDP as a major opposition party in Nigeria can disagree with Mr. President on so many policies of his administration, we cannot however, endorse any attempt to blackmail the President on his efforts on curbing insecurity. This empty and shameless braggadocio on security by some PDP members will only make the party a laughing stock before Nigerians and the rest of the world.

Any Nigerian plotting the fall of the President Buhari’s Government for selfish reasons and through undemocratic or illegal means should bear in mind that Nigerians and the rest of the world will reject any attempt to truncated her hard earned democracy. Indisputably, such characters will also neither enjoy our backing nor blessings on any act designed to destroy the unity of Nigeria and plunge the country into tatters.

Thank you and journey mercies.