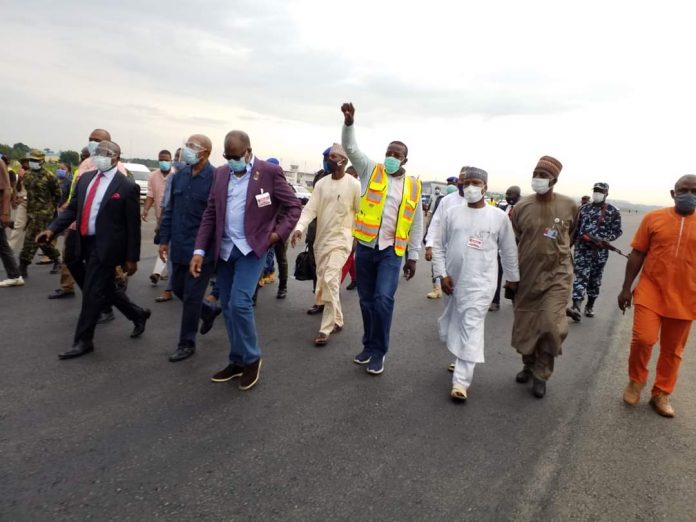 Sirika gave the assurance at the airport in Enugu after inspecting the progress of ongoing rehabilitation of the runway and upgrade of other infrastructure, aiming toward international standards, on Tuesday.

According to him, the project has reached between 90 and 95 per cent completed.

The ministet said the Federal Government planned to make a quick intervention in the procurement to ensure dilapidated runway, which was a threat to the safety of operations, is fully dealt with.

”We were on course, but unfortunately, COVID-19 came and the workers took to their heels to ensure that they remain safe.

”We are back on site and we have made a tremendous amount of progress.

”However, the final wearing course is where we are on the runway while the perimeter fencing and the road is going on.

”Also, other works,including airfield lighting for day and night operations and for it to truly answer its name – Akanu Ibiam International airport, Enugu,” he said.

The minister said the rainy season was also a monster in the procurement of the project.

He, however, commended the contractor and the consultants for doing extremely well with the Federal Airports Authority of Nigeria (FAAN).

”I am happy with the progress of work.

”I am very confident that this procurement will be delivered on the 30th August, 2020.

”This, of course, is with the due consideration to the weather, but with the help of God, we will deliver this procurement on 30th of August for use with most of the associated works.

”I can say authoritatively that this runway is one of the best if not the best in the country at the moment.

”Turningpad of this runway is made of concrete.

”Unlike our other airports where turning pads are made of asphalt and they don’t take the beating that we give to them due to the weight of the aircraft but this one is made of concrete,” he said.

Sirika said the government would soon set up cargo terminal that would generate economic activities around the city.

The minister said Chinese terminal, which was about 60 per cent completed at the airport, would also be delivered as soon as possible.