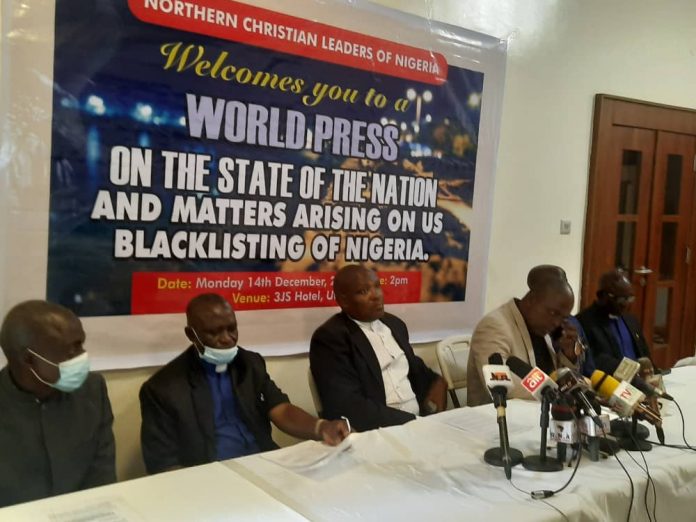 Some Christian leaders have expressed disappointment with the United States over the inclusion of Nigeria among countries violating religious freedom in the world.

The group, under the auspices of Northern Christian Leaders of Nigeria (NCLN), urged the Donald Trump-led administration to review and reaccess its earlier position which it believes inferred support for terrorist sympathisers in the country.

Speaking at a press conference on Monday in Abuja, through President, Rev. Job Idoko, the NCLF said Nigeria’s inclusion is unacceptable and illogical owing to the politics of bitter opposition “who have deployed every means to run down the current administration”.

According to the group, the same aggrieved politicians are in support of the blacklist, playing the religious card openly while surreptitiously supporting the masked evil against Nigeria for partisan reasons.

While admitting to sponsored armed gangs and criminals in the country, the Christian leaders said it bears no religious undertone as being portrayed by the U.S.

The group, therefore, demanded an immediate review and removal of Nigeria’s name from the repulsive blacklist, adding that the country is among the safest to practice any religion.

The NCLF, however, urged all Nigerians to join the Federal Government to “reject resoundingly, the generalized foreign tagging of their country by anyone as a terrorist’s nation”.

Being full text of a Press Conference addressed by the Northern Christian Leaders of Nigeria (NCLF) President, Rev. Job Idoko, which frowns at United States of America’s glaringly deceptive lure into the politics of Nigeria’s internal terrorist’s sponsors, sympathizers and agents of terror acts and call for its immediate reversal, held on December 14, 2020, in Abuja.

We wish to welcome you to this brief Press Conference. We also thank you for the prompt response and may Almighty God bless all of you and Nigerians abundantly.

We have summoned this urgent interaction with you to speak to Nigerians on a very serious matter of national and international dimension. And our greatest worry is the conscious revival of our permanently sentimental and destructive fault-lines of ethnicity and religion.

Most of you must have heard about the USA’s inclusion of the name of Nigeria among countries, the White House approved as blacklisted for what it calls “systematic” violation or stifling of religious freedom. With American’s latest list, Nigeria has now been paired alongside countries like Eritrea, Myanmar, North Korea, Tajikistan, Turkmenistan, Saudi Arabia, Iran, Pakistan, Iraq, Afghanistan and others.

As Christian leaders, we find the latest categorization of Nigeria among these countries very unacceptable and illogical.  The debate of whether or not Nigeria should be included in the defaming and demeaning black/watchlist of Nigeria by America on targeted countries famed for violating religious freedom is not new to us.  We want to believe the USA is hoodwinked into taking the hasty decision on Nigeria at the moment.

NCLF’s is aware of the US Law which has permitted this blacklist, and its threats sanctions on countries in the blacklist, if they fail to improve. But if the USA has ever blundered, anytime in its history, it is on this score. We are surprised that with all its claims to sophistry, it cannot denote the internal politics of bitter opposition members who deploy every weapon at their disposal to run down an incumbent Government in Nigeria.

These soulless politicians can unconscionably seek the backing of even a blind man or cripple to push the devious agenda.  It is what is happening to Nigeria now. And it is expected that America with its global aura of significance and desire to see a better world on the principles of freedom, liberty, fairness and justice would condescend to listen to gutter gossips on Nigeria and adopt or stamp an official decision based on it.

Let us crave the indulgence of the world to elucidate President Donald Trump and indeed, the American Government of the recurring games politicians play in Nigeria. These are antics they have been unknowingly goaded to believe its Government stifling of religious freedom or persecution of Christians in Nigeria.

Of course, Nigeria is under heavy and near unbearable conspiratorial pressures by armed gangs and criminals. These armed criminals whether as Boko Haram/ISWAP terrorists, herdsmen, armed bandits, insurrectionists, armed robbers/kidnappers and the likes have a common agenda- it is to destabilize Nigeria, cause the general breakdown of law and order, increase the tempo of lamentations’ in the land to discredit all incumbent leaders especially, President Muhammadu Buhari who is only guilty of their blackmail by his faith as a Muslim.

These are sponsored armed gangs by disgruntled politicians in the country. And once the armed gangs go out to commit atrocities and horrendous crimes against humanity, there is no distinction between Christians and Muslims. Their swords of blood affect everybody indiscriminately, depending on where and when they descend their fury on innocent citizens.

Records of such killings in Nigeria by these armed gangs bear no special imprimatur of haunting for a particular religious sect or ethnic groups in the country. It is just a manifestation of the crimes some Nigerian elites have decided to visit their country. From Boko Haram/ISWAP terrorists to armed bandits, the sectarian crisis in Kaduna to herdsmen invasions, the story is the same. Both Christians and Muslims are caught in the crossfire of bloodshed and all have been killed by these agents of the devil in competitive numbers, including traditionalists or believers in traditional religion.

We believe America has such details in their kitty before now.  Therefore, we shall not bore anybody with a repetition of such past gores. But let us recount the latest violent incident of gunmen invasion of a boarding school in Katsina state a few days ago. Katsina happens to be the home state of incumbent President Buhari.

But about three days ago (last Friday night), some armed and unidentified persons stormed Government Science Secondary School, in Kankara LGA area of the state, a strict boarding school with a population of slightly above 800 students. It was in the night and they started shooting, ending this violence with the kidnap of over half the population of the school.  The BBC even reported on Sunday, 12th December 2020, that about 400 kidnapped students are still missing from the incident.

Katsina state in Nigeria’s Northwest is near 100% or predominately a Muslim state and Mr. President’s home state.  So, could anybody reasonably conclude that the over 400 students kidnapped in the boarding school at Kankara were all Christians? Could Mr. President be so callous and insensitive as to allow gunmen kidnap children of his own kith and kin, also Muslims like him?  This is what some hired Nigerians are doing to their own country and playing the religious card of persecution to the global community.

We are, therefore, cautioning America to re-watch, and deeply reassess to review its hasty decision. It should rather explore ways to possibly assist Nigeria to get out of this insecurity quagmire than bow this low to charlatans campaigning for selfish agenda.

We wish to openly reiterate that the internal supporters/campaigners of America’s blacklist of Nigeria are aggrieved politicians who are simply, playing the religious card openly; while surreptitiously supporting the masked evil against Nigeria for partisan reasons. These deviously cursed souls are after the heart of Nigeria, intent on causing its total ruination. And the global attention they seek, by playing the religious card is because President Buhari happens to be a leader of Nigeria now, who belongs to the Islamic faith and the tales.

That’s why some leaders of the Christian Association of Nigeria (CAN), most of whom are also politicians, so in support of the blacklist of Nigeria on America’s blacklist of countries violating religious freedom. But members of the Islamic Movement of Nigeria (IMN) (Shiites Muslims) have also accepted the wrong American decision on Nigeria.  But are Shiites a Christian sect in Nigeria? How, then do they claim religious persecution, under a President of Muslim extraction?

These are the salient issues which should guide America’s review and next decision. It’s just the evil which has perverted our land. It is courted and romanced by the non-state actors gleefully.

Consequent upon this, we wholeheartedly back up the FGN’s total rejection of the allegations of Christian persecution in Nigeria and describe the U.S’s decision as very unripe, unthoughtful and unreasonable. We, therefore, boldly inform the U.S. Secretary of State. Mr. Mike Pompeo to delist Nigeria from its freshest list of suspected violators of religious freedom among the   nine other nations as “countries of concern.”

It is an attempt to prevent America from withholding the supply of the 12 Tucano Fighter Jets, which Nigeria paid in 2017 to fight Boko Haram terrorists. And also, other possible Military assistance the USA might want to render to Nigeria to defeat Boko Haram/ISWAP terrorists.

NCLF therefore, call for an immediate review and removal of Nigeria’s name from the repulsive blacklist. Nigeria and Nigerians deserve her respectful position amongst the comity of nations. Nigeria doesn’t and hasn’t violated anyone’s religious or human rights on freedom of worship.

Nigeria remains the freest country in religious tolerance. We should avoid mixing politics with insecurity and American is in the best position to understand it better.  Once again, we reject the resentful tagging of Nigeria by America.  They are propelled by the handiwork of Nigeria’s enemies and we again, repeat the call for an immediate retraction.

Lastly, we are calling on all Nigerians to reject resoundingly, the generalized foreign tagging of their country by anyone, as a terrorist’s nation. We are only battling invading terrorists, but we are neither a terrorist nation onora country which violates religious freedom.  Thank you and may God bless you and Nigerians.