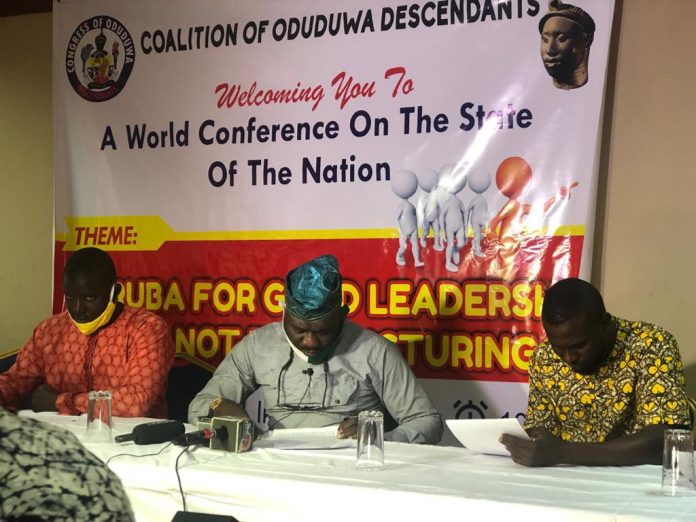 The Coalition of Oduduwa Descendants (COD) believes that what the country needs is attitudinal change, truthful and purposeful leadership and not secession being clamoured for by some activists.

The group said it is morally wrong for any true son and daughter of Oduduwa to mute the idea of secession from Nigeria.

Speaking at a press conference on Wednesday, President-General,

Otunba Arokoyo Olumide said the call is not “only uncharitable, it is an affront to the sensibilities of Oduduwa the progenitor of the Yoruba race”.

According to Olumide, the group’s position is that of “One Nigeria because from time immemorial we have been critical stakeholders, and we have remained so”.

The Coalition of Oduduwa Descendants, however, commended President Muhammadu Buhari for his leadership strides in keeping the country together and giving its people a fair share in his government.

While urging all to join hands together to support the president, the COD warned certain individuals and groups to avoid being used to destabilise the government.

You all must admit that indeed this calls for great concern given the fact that the call is not only uncharitable; it is an affront to the sensibilities of Oduduwa, the progenitor of the Yoruba race.

As a background, Oduduwa was a Yoruba divine king. His name, phonetically written by Yoruba language-speakers as Odùduwà and sometimes contracted as Ooduwa, Odudua or Oòdua is today venerated as “the hero, the warrior, the leader and father of the Yoruba race.”

Upon the ending of Oduduwa’s time on Earth, there was a dispersal of his children and grandchildren from Ife to the outposts that they had previously founded or gained influence over, for them to establish effective control over these places. Each is said to have made his or her mark in the subsequent urbanization and consolidation of the Yoruba confederacy of kingdoms, with each child and grandchild fashioning his or her state after Ile-Ife.

It, therefore, suffices to state that indeed the true sons and daughters have been instrumental to the formation and independence of Nigeria from time immemorial. Therefore it makes no sense when there are perceived agitations from a segment of who claim to be descendants of Oduduwa, calling for the secession of Oduduwa from Nigeria.

The call by the group under the nomenclature Oduduwa Secessionist Agenda is indeed a misplaced one that is laced with ulterior motives buoyed by pecuniary gains rather than a genuine intent.

It is thus the considered opinion of the Coalition of Oduduwa Descendants that indeed the Nigerian project is sacrosanct and not a topic of discussion given the efforts of the Muhammadu Buhari administration in ensuring that Nigeria remains united and prosperous for all regardless of our ethnic or religious affiliations.

This undeniable fact has been echoed in various forays, and it is consequently morally wrong for any group or association to preach the gospel of disunity in Nigeria. This is on the heels that the reverse ought to be the case given the peculiarities of times in Nigeria and the need for strength in our diversity as we march towards sustainable growth and development in Nigeria.

The Coalition of Oduduwa Descendants is using this medium to reecho the stance of revered Yoruba leader, Chief Bisi Akande wherein he stated that the Yoruba race would be at war for 100 years if they leave Nigeria.

In his words, “the Yoruba breaking away from Nigeria may lead to bloodshed and an avoidable civil war that would further decimate the people. Those agitating for the Yoruba nation should have a rethink. This country must remain united to save it from war.”

The import of the message of the elder statesman is apt and in conformity with the position of the Coalition of Oduduwa Descendants which sees the call for secession as a disservice to Nigeria and the efforts of great sons and daughters of Oduduwa who were instrumental to the independence of Nigeria through their great sacrifices and invaluable contributions.

This is also on the heels that in contemporary Nigeria, sons and daughters of Oduduwa have been critical stakeholders as evident in the positions of authorities that have been placed on their shoulders. It is instructive to state that they have not failed in this regard. Therefore it defeats commonsense as to why some group of monetary induced individuals would now want to constitute themselves as clogs in the wheel of progress of Nigeria.

The Coalition of Oduduwa Descendants wishes to inform Nigerians that indeed the position of the true sons and daughters of Oduduwa remains One Nigeria because from time immemorial we have been critical stakeholders, and we have remained so in Nigeria.

It is also morally wrong for any true son and daughter of Oduduwa to mute the idea of secession from Nigeria. It is also nothing but sheer mischief aimed towards the disintegration of Nigeria, which would be resisted by true sons and daughters of Oduduwa that dots the nook and crannies of the socio-political landscape in Nigeria.

The Coalition of Oduduwa Descendants wishes to state that the leadership strides of President Muhammadu Buhari in keeping Nigeria united is indeed phenomenal and a justification for why all hands should be on deck towards ensuring that Nigeria remains a strong and indivisible entity.

If this is indeed the case, it is our considered opinion that those individuals and organizations preaching secession needs a mental evaluation for them to realize that the Yorubas are better under a united Nigeria than anywhere else. And under no circumstances should the chances of sons and daughters Oduduwa be ruined in the buildup to the 2023 general elections through this needless and ill-fated agitation.

This position of ours is indeed justified when an evaluation of the giant strides of the Muhammadu Buhari administration indicates that there have been concerted efforts at the fight against corruption and other anomalies capable of distorting growth and development in Nigeria.

The Nigerian Military is also worthy of our commendation in their efforts in addressing the various security challenges in the country despite the avalanche of conspiracies against it. They have done more than enough especially in the Southwest where bandits and other criminal elements have been on the run after the Army and other organizations took over the strategic control of the security situation in the country.

The focus is should therefore be Attitudinal Change, Truthful Leadership Not Secession”

He who robes the child to befit the child

He who robes the child with the utmost of care

The one who wakes early in the morning, holding the robes of prosperity

The one who looks after the Earth is the name of IFA.

IFA, please look at Nigeria with compassion and let Nigeria be blessed with riches…

IFA, please look at us with your compassion and let us be blessed with riches! Ase Ase Ase O!Ire O.