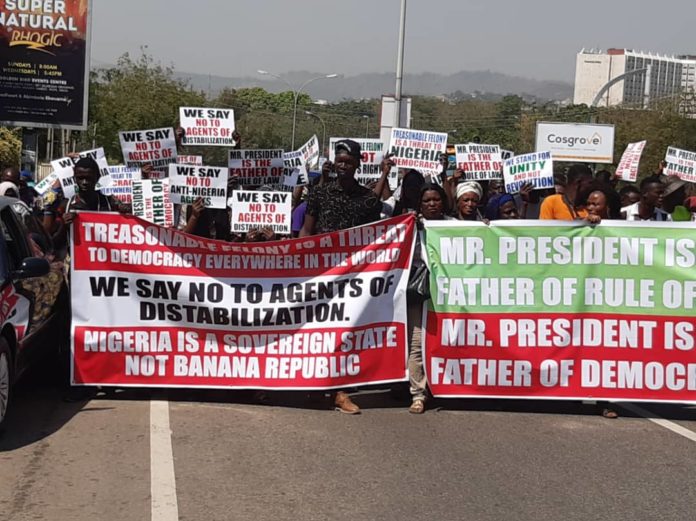 The last seems not to have been heard on the embattled publisher of Sahara Reporters, Omoyele Sowore as a group of civil rights activists today in Abuja took to the street to demand the investigation of his foreign  counterparts in the RevolutionNow protest which authorities have claimed is targeted at destabilizing the country.

The protesters, led by the Congress for Defence of Democracy (CDF), ended their walk at the office of the Attorney General of the Federation and Minister of Justice, Abubakar Malami, calling for an urgent probe on the nefarious activities of Mr Sowore and his foreign collaborators.

In a petition signed by Convener, Stephen Okenarhe and submitted to the AGF, the CDF revealed that it would be a disservice to the unity of Nigeria should Mr Sowore be granted bail without identifying his foreign sponsors.

According to Okenarhe, the controversial human rights activist have proven to be acting a script by “enemies of Nigeria that are envious of the giant strides recorded in critical sectors of the economy in the past four years under President Muhammadu Buhari”.

Besides the ongoing seven-count charge trial, the group pointed out that Mr Sowore has secretly been receiving illicit funds from some foreign sources while also covertly running the propaganda wing of Boko Haram.

Okenarhe added that the presidential candidate of the African Action Congress even signed a pact with the proscribed Islamic Movement in Nigeria (IMN) and some disgruntled opposition politicians to destabilise the nation.

Mr Sowore, the group reckoned, could eventually jump bail and continue with his nefarious activities – just like Nnamdi Kanu.

The protesters, therefore, called on the AGF “ to use his good office to institute discrete investigation by the concerned authorities to track down and arrest those involved.

“The Attorney General of the Federation may wish to know that the charges brought against Omoyele Sowore are not a reflection of the enormity of the havoc he intended for the country with his planned Revolution Now,” the statement reads in part.

“ The Honourable Attorney General may wish to be informed that Omoyele Sowore has been secretly receiving illicit funds from some foreign sources since the build-up to the general elections for vote-buying. However, he mismanaged the funds, and the alternative was to stage a violent revolution to impress his paymasters.

“ This is on the heels that the Omoyele Sowore indeed planned to cause unrest in the country by receiving a massive amount of monies from questionable sources to procure arms and ammunitions.

“Omoyele Sowore has been covertly running the propaganda wing of Boko Haram in conjunction with other intellectual asset of the terrorists group in Nigeria. This has seen his news outlet receiving and publishing information on troops’ movements, casualty figures in attacks that never took place or just before they take place etc. But to our greatest surprise, these were neither investigated by the DSS or featured in the charges against Sowore in court.

“Omoyele Sowore also planned to orchestrate mass outcry against the Federal Government of Nigeria in order to trigger wanton killings by members of the Islamic Movement in Nigeria and the Independent People of Biafra (IPOB) led by Nnamdi Kanu. We have it on good authority that he had a meeting with Nnamdi Kanu and these were discussed before his subsequent arrest by the DSS.

“Omoyele Sowore secretly entered a pact with sponsors of the Islamic Movement in Nigeria (IMN) being Iran to cause unrest in the country in line with an earlier threat that Nigeria will pay for disallowing the lawless activities of the IMN. He has served as the conduit for the transfer of funds to the IMN through the accounts of SaharaReporters where the funds come in donations.

“ Omoyele Sowore in collaboration with the major losers of the 2019 are still nursing the intention of destroying our democratic ethos instead of waiting for the next general election to test their self acclaimed popularity through the ballot.

“ We wish to inform the Honourable Attorney General that with the avalanche of established cases against Omoyele Sowore, it would be indeed a great disservice to the unity of Nigeria should he be granted bail without identifying his sponsors, as well as those with whom Omoyele Sowore plotted with to destabilize the peace and unity of our country.

“ The Honourable Attorney General may also wish to know that as it stands, Omoyele Sowore poses a significant threat to peace and tranquillity in Nigeria, as credible information at public disposal indicates covert plans to organize protests across the country against the government in the name of freedom of expression or bogus claims to fighting for human rights at the detriment of national security.

“The case of Ibraheem El-Zarzarky is also worthy of mention where he plotted to be airlifted to Iran through a brief stop over in Dubai but was intercepted through the vigilante eyes of the security agencies.

“We are by this letter calling on the Honourable Attorney General of the Federation to use his good office to institute discrete investigation by the concerned authorities into the nefarious activities of Omoyele Sowore to track down and arrest those involved in the destabilization agenda.

“We are constrained to add that not until a proper investigation is carried out by the relevant security agencies, releasing Omoyele Sowore will endanger the lives of other citizens, particularly the youths, to carry out actions that will disintegrate the country.

“It is good to mention that the parallel government which Sowore intends to form is already reaching out to countries like Iran for recognition whereas people like Deji Adeyanju, Dayo Ariyo etc are being penciled as Ministers in that arrangement.”