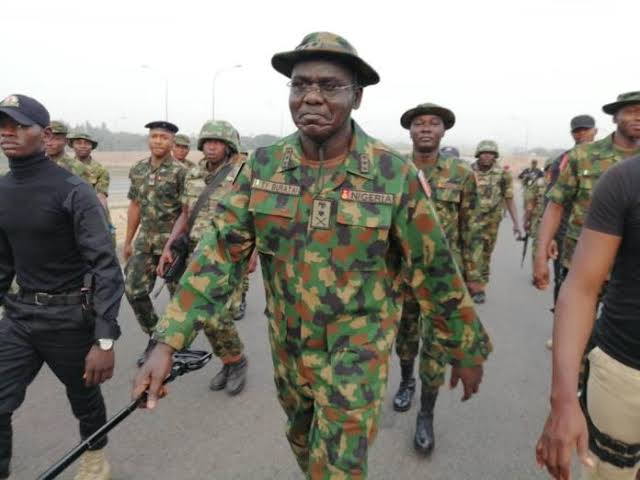 The Oduduwa Progressives Youth Congress (OPYC) has described the Nigerian Army as the “guardian of democracy” with its enhanced civil-military relationship.

The group’s commendation trails the construction and commissioning of a bridge and hospital in two communities in Osun State by the Chief of Army Staff (COAS), Lt. Gen TY Buratai.

With these and other completed projects, the OPYC said the army has become a strong pillar of support to civil rule, “shedding the toga of being an antithesis to the growth of democracy”.

Speaking at a press conference on Thursday in Lagos, OPYC President, Kola Salawu, said the coming of the administration of President Muhammadu Buhari and the appointment of the current set of service chiefs changed the narrative about the military.

“It is indeed a new dawn in our country, as each passing day, we keep witnessing contributions and support from the Nigerian military to causes that enhance not just civil/ military cooperation but ones that foster the growth of democracy,” Salawu revealed.

“On Monday September 14, 2020, the Chief of Army Staff, Lt. General Tukur Yusuf Buratai commissioned  two projects for use by communities in Osun State. The first is the Bailey bridge which runs over the Osun River that links Ede, Owu Kuta and Ikoyi communities and the second is a hospital at Asamu town, both constructed by the Nigerian Army for the use of those communities.

Clearly, the Nigerian Army, which was thought to be rigid and insensitive, is rising up to evince a humane side the public was not aware of.

” In the past, when the Nigerian Army is mentioned, what comes to mind is force, battle and even war. But since the coming of the current administration of President Muhammadu Buhari and the appointment of the current set of service chiefs, we are beginning to experience the kind of military we have longed for, which we thought was not possible in Africa.

” What the two projects in Osun State and others built by the Nigerian Army represent is beyond mere assistance to communities, but an indication that the army is not unaware of its role as an institution built on the foundation of patriotism and one expected to stand as a bulwark of support for any system that guarantees the growth and development of the country”.

The group likened President Buhari to some of its revered fathers such as Oba Ahmed Adekunle Oyelude Makama Tegbosun III, the Olowu of Kuta due to the massive infrastructural development in the region through the COAS.

Salawu added that, “As true sons and daughters of Oduduwa, we wish to commend President Muhammadu Buhari who is giving the South west its due with various laudable projects.

” We thank the President for the support he is giving the Nigerian Army through the provision of funds for the army to carry out its statutory functions of defending the territorial integrity of the nation as well as intervene to support democracy, good governance and the rule of law.

” We also thank the Chief of Army Staff, Lt.Gen Tukur Yusuf Buratai and the entire Nigerian Army for these initiatives which are helping our people”.

While many may write these off as part of the army’s cooporate social responsibility, the group, however, noted that the people of the southwest are indeed delighted for the numerous projects.

” As the saying goes, if the people are happy, there would be lawand order as no doubt that there would be less agitation or civil strife and the seeds for sustainable democracy can take root and germinate. We are happy as a group that these projects are coming to Southwest,” Salawu revealed.

” The Southwest used to be the loudest in the demand for democracy, civil rights and good governance. We are aware that the Nigerian Army has also done other projects in the South west to support democracy and the government of President Muhammadu Buhari.

” For instance in July, the Nigerian Army set up an isolation centre at 32 Artillery Brigade, Owena Cantonment, Akure, in Ondo State to help  put an end to the pandemic ravaging the country.

” The army also renovated staff quarters, guard quarters and Medical Centre to encourage the personnel and to uplift the standard of living of all personnel.

” Indeed every barrack in the South being impacted to uplift standard and improve infrastructure and ensure the army remains a professional, apolitical and a focused institution. The commissioning of 7 units of Non-Commissioned Officers (NCOs) Quarters at Ikeja Army Cantonment in Lagos.

” There are others like the recently completed Nigerian Army Aviation Pilots’ Accommodation, the renovated two-storey buildings consisting of 49 rooms each popularly known as officers’ transit accommodation and the ongoing rremodellingof the Cantonment’s Officers’ Mess in Lagos.

” The building of Command Day Secondary School and his intervention in Army Children Schools. These indeed are landmark achievements that are of immense benefit to the people of the Southwest and we cannot but pray for the success of this administration and for the Chief of Army Staff, Lt.Gen Buratai”.