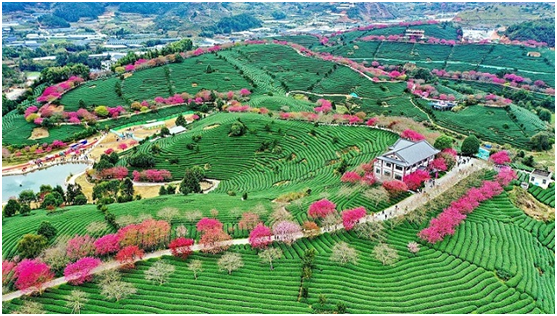 Tea is a symbol of Wuyishan Mountain, which sits at the border of east China’s Jiangxi province and southeast China’s Fujian province. Tea planting and making has long been a tradition in the local community.
In October 2021, Wuyishan National Park was set up, and the construction and management of tea plantations became one of the most important parts of the park’s ecological conservation efforts.
Liao Hong, director of the Root Biology Center of Fujian Agriculture and Forestry University, still remembers the picturesque view she saw and the tea aroma she smelled when she came to Wuyishan Mountain for the first time in 2001.
However, on her second trip to the mountain in 2015, she found that the local ecology haddeteriorated and the quality of local tea products had declined.
This was a result of the local tea industry’s excessive pursuit of output.
“Under traditional tea planting models, expanding planting areas and utilizing fertilizers is the major way to increase tea output. Therefore, over-reclamation and overuse of fertilizers were common, resulting in ecological damage and a decrease in the quality of tea products,” Liao explained.
In 2016, a pilot project of the national park system was implemented in Wuyishan mountain.
Over3000hectares of tea plantations on the mountain were included in the protected area of the national park, which made protection and development even more contradictory against each other, said Liao Chuanping, head of the ecological conservation department of the management bureau of Wuyishan National Park.
“Tea planting is the primary source of income for local people, but what come with the national park are strict ecological protection measures,” Liao Chuanping told People’s Daily.
The choice between ecological conservation and the development of the tea industry soon became a headache for local authorities.
Therefore, Liao Hong, as an expert in this field, started working to make an innovative model that both addresses ecological issues and increases tea production.
She had investigations in multiple major tea-producing areas in Fujian province, leaving her footprints on every corner of Wuyishan Mountain.
In 2015, she met tea maker He Shi’an. They soon hit it off on an eco-friendly tea planting. In the following year, Liao Hong carried out a series of experiments at the invitation of He, in an attempt to make tea plantations safer and more efficient.
“We planted oilseed rape in winter and soybean in summer. With organic fertilizers specifically developed for tea plants, both the quality and production of tea increased significantly,” Liao Hong said, adding that tea plantations looked healthier and the taste of tea products was also improved.
In 2018, with the support of the local government, Liao Hong brought this new eco-friendly model to Wuyishan National Park, and it was warmly welcomed by local tea farmers.
Since March 2018, the management bureau of Wuyishan National Park has been planting precious seedlings in tea plantations to improve the ecology. According to Liao Chuanping, oriental cherries have been planted in 20 hectares of tea plantations over the past year.
So far, the new eco-friendly model has been comprehensively promoted in the national park.
Fang Zhou, a local tea farmer whose eco-friendly tea garden is in Xingcun township, told People’s Daily that good ecology has brought good quality to tea products, which means a higher market price.
Fang said many tea farmers have planted native deciduous trees in tea plantations over the past year, as the higher market price of tea products made them realize the importance of ecological conservation.
The construction of eco-friendly tea plantations also drives the development of relevant industries. “The oriental cherries planted in the plantations not only improved ecology but also the scenery of plantations, which makes tea-themed tourism possible,” Fang said.
Fang’s dream, he said, is to turn tea plantations into a park, and now this dream is coming true.