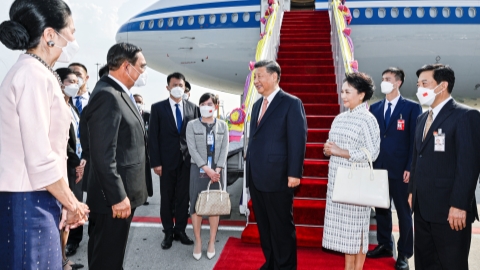 The trip, as the first one paid by the Chinese President after the successful conclusion of the 20th National Congress of the Communist Party of China (CPC), drew global attention.

During his six-day trip, Xi participated in more than 30 events, which has sent out a loud voice for promoting global development and leading global governance, demonstrating China’s role as a rational, confident and responsible major country.

While addressing multilateral meetings and talking with leaders of other countries, Xi elaborated on the 20th CPC National Congress, Chinese modernization, win-win cooperation between China and the rest of the world, and championed bright prospects of China’s high-quality development and high-standard opening up, sending a strong signal that China will always advance world peace and development and deepen opening up and cooperation with other countries.

It has helped other countries better understand and be more receptive of the CPC’s governing strategy and China’s path and vision.

French President Emmanuel Macron commended the Chinese path to modernization and Singaporean Prime Minister Lee Hsien Loong noted that a strong and friendly China will bring positive influence to the region and the world.

The G20 summit has brought together world and regional major countries and is also a platform for international economic cooperation. It shoulders heavy responsibilities in responding to global economic challenges.

At the 17th G20 Summit, Xi said it is imperative that all countries embrace the vision of a community with a shared future for mankind, and advocate peace, development, and win-win cooperation.

He said all countries should replace division with unity, confrontation with cooperation, and exclusion with inclusiveness, and make global development more inclusive, beneficial to all and more resilient.

He called on all countries to join hands together to answer the question of the times — “what is wrong with this world, what we should do about it.”

China’s important ideas and proposals concerning international economic cooperation were included in a joint leaders’ declaration adopted at the end of the 17th G20 Summit, and 15 cooperation projects and initiatives proposed by China were incorporated in a list of practical cooperation made by the summit. It fully indicated China’s support for multilateralism and contributions to G20 cooperation.

It is believed by international personages that China, advocating solidarity and win-win cooperation, has played a constructive role in making the summit a success.

At the 29th APEC Economic Leaders’ Meeting, he stressed that the Asia-Pacific region needs to continually deepen the Asia-Pacific partnership featuring mutual trust, inclusiveness and mutually beneficial cooperation, build an Asia-Pacific of peace and stability, bring about prosperity for all in the Asia-Pacific, ensure a clean and beautiful Asia-Pacific, and make itself a region where all are ready to help each other.

Xi’s remarks mirrored China resolution and vision in driving the future development of the world with its own progress and leading global recovery with the recovery of the Asia-Pacific.

After the 29th APEC Economic Leaders’ Meeting, APEC economies issued a declaration and endorsed an outcome document on Bio-Circular-Green Economy, which reflected China’s proposals in building an Asia-Pacific community with a shared future and the country’s new development philosophy.

During Xi’s visit this time, Xi and his U.S. counterpart Joe Biden had their first face-to-face meeting in three years. The two presidents had a candid and in-depth exchange of views on issues of strategic importance in China-U.S. relations and on major global and regional issues.

The international community believes that the meeting will help China-U.S. relations steer clear of disruptions and get back to the right track of development.

During the trip, Xi met with over ten leaders of foreign countries and international organizations. The compact schedule and fruitful trip once again proved that cooperation, dialogue, and win-win results represent a momentous trend of the times and are the right way to go, and the Cold War mentality and bloc confrontation cannot win public support.

More and more countries have come to realize that China’s development expands the strength of peace and progress, and that China is a reliable friend and partner that they must cooperate with.

The historical trend of peace, development, cooperation, and mutual benefit is unstoppable. The will of the people and the general trends of our day will eventually lead to a bright future for humanity.

Embarking on a new journey in the new era, China will always stand on the right side of history and on the side of human progress.