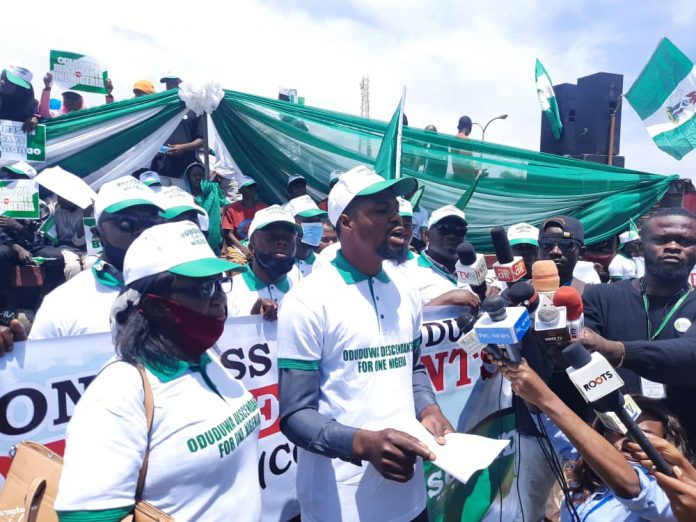 The Coalition of Oduduwa Descendants (COD), on Friday, held a one million-man march for the unity of Nigeria, expressing firm belief and unalloyed commitment to peace and prosperity of the country.

The rally, which was held in Abuja, was attended by 20 chapters of the group from the Federal Capital Territory and the 19 northern states.

Owolabi pledged solidarity with the Federal Government in “her various efforts at translating the hopes and aspirations of all Nigerians into tangible reality”.

According to him, those “canvassing for the Oduduwa Republic are not one of us and shall never be because their agitations are borne out of absolute mischief intended to truncate our nascent democracy”.

He, however, warned that his members and other true descendants of Oduduwa would not watch the enemies of Nigeria have their way, hiding under whatever nomenclature that would lead to chaos and disunity.

Read the full address below:

My brothers and sisters the occasion of Nigeria’s 60th Independence anniversary celebration is indeed worthy of rolling out the drums. That we have remained united as One Nigeria for the past 60 years is an indication that the labours of our heroes past are not in vain despite the evil plots hatched by those that have elected to constitute themselves as clogs in the wheels of our progress as a country.

We have weathered the storms, and we have come out unscathed. We have experienced one of the most deadly insurrections in the world, yet we remain unshaken. What the enemies of Nigeria do not know is the fact that our strength lies in our diversity.

On this auspicious occasion, the message of the Coalition of Oduduwa Descendants in the federal capital territory and the northern states in Nigeria is unequivocal, and it is One Nigeria for all regardless of our ethnic or religious affiliations.

This message of ours is not a function of time and chance, but a product of our collective resolve to see to the strength and unity of Nigeria in all aspects of our daily lives. And that today we are re-echoing the same message to send a strong signal to those that are propagating ethnic sentiments with the overarching objective to see to the disintegration of Nigeria.

As members of the Coalition of Oduduwa Descendants in the FCT and Northern states, we stand in solidarity with the government in her various efforts at translating the hopes and aspirations of all Nigerians into tangible reality.

As such, the message is strong, and the carriers of the message are resolute in the endeavour to see that Nigeria remains united as one strong entity as we journey towards the ultimate goal of the Nigeria of our dreams and a nation bound in freedom, peace and unity.

My dear brothers and sisters, this One Million Rally is a child of necessity because we shall not sit and watch the enemies of Nigeria have their way hiding under whatever nomenclature that would lead to chaos and disunity.

As we can all see with our numbers, the commitment to One Nigeria is infectious. It is also a clarion call to all compatriots when Nigeria calls we must obey. We have elected to serve our fathers land, with love and strength and faith, to build a nation where peace and justice shall reign supreme.

This much must be understood from all the nook and crannies of Nigeria that indeed the coinage Oduduwa Republic, as well as its agitations, does not hold a pride place in the lives of all descendants of Oduduwa because we are not known to be hostile or known to be engaged in acts that are inimical to the interest of One Nigeria.

North or west we do not know. South or East we also do not know, but One Nigeria, we know and where our loyalty lies. And this One Million Rally Match is a manifestation of that firm belief and unalloyed commitment to peace and prosperity in Nigeria.

We are also using this One Million Rally Match to send a strong message to the rest of the country that the sons and daughters of Oduduwa are in full support of Nigeria as an indivisible entity. Anyone against this declaration is an enemy of the country.

It would therefore be against all that Oduduwa represents if we go against the unity of Nigeria. This and many more reasons are our sources of inspiration and firm belief in One Nigeria. And it should therefore be on notice that no true son or daughter of Oduduwa would identify with acts or actions that would lead to the breakup of Nigeria. We are stakeholders in One Nigeria, and as such, we shall not allow any individual or group to constitute themselves as clogs in the wheels of progress of Nigeria.

Those canvassing for the Oduduwa Republic are not one of us and shall never be because their agitations are borne out of absolute mischief intended to truncate our nascent democracy, which in our considered opinion is dead on arrival as their nefarious motives have been exposed.

We are descendants of Oduduwa in the federal capital territory and all the northern states in Nigeria embarking on the One Million Rally Match not just in commemoration of the 60th Anniversary celebration of Nigeria, but also to reassure our brothers and sisters from other parts of the country that we stand in solidarity with them in our quest for a united and prosperous Nigeria.

We hope that our message gets to the enemies of Yoruba Sons and Daughters that again, this plot has failed and they should desist from heating the polity unnecessarily.

Nigeria is home to all and under no circumstance should any individual or group no matter how highly placed should take us for granted.