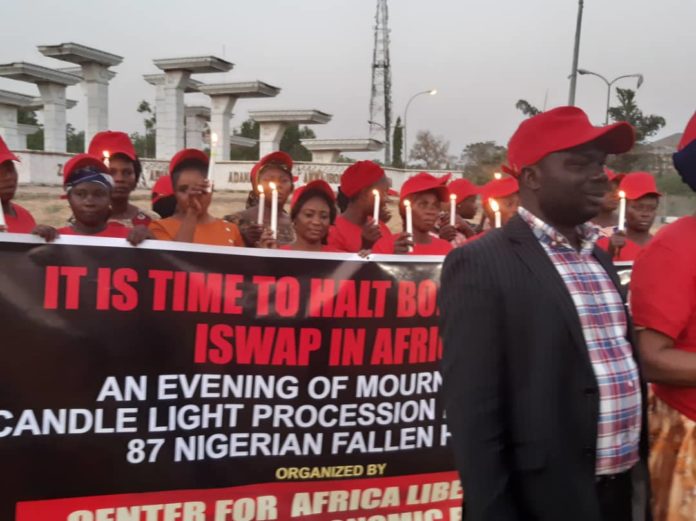 The Centre for Africa Liberation and Socio-Economic Rights (CALSER) has grieved with the government and people of Niger Republic over the death of its troops, calling for sanctions against France and other alleged sponsors of terrorism in Africa.

The group made this known at a candlelight procession held at the Unity Fountain, Abuja, on Tuesday night in honour of the slain Nigerien soldiers.

The Niger government declared a three-day of national mourning after 89 soldiers were killed in an attack on a military base on Thursday.

Heavily armed militants invaded an army outpost in Chinagodrar in the country’s west, near the border of Mali, prompting the country’s president Mahamadou Issoufou to axe its Army Chief.

In a sober march, CALSER mourned with the Francophone nation and further raised the alarm about foreign entities backing Boko Haram/ISWAP terrorists on the continent.

CALSER’s convener Princess Ajibola, in her statement, blamed the United Nations for seemingly not doing enough to stop the subversive activities of countries that are sponsoring terrorists to destabilize Nigeria and the rest of Africa.

Ajobola singled out France, which routinely have been fingered to be behind terrorism in Africa, especially owing to the Lake Chad resources.

The group, therefore, called on the European nation and others “ eager to drown West Africa in blood to heed lest they take the larger ember of the fire they are stoking to their bosom”.

The group of Nigerians further besieged on the United Nations “ to remove their heads from the sand and stop playing the proverbial ostrich”.

In a situation where the UN doesn’t take any action, CALSER advised authorities in Niger to bring the harshest repercussions yet upon the terrorists.

Lovers of humanity,
Permit us to begin this address by inviting us all to join in the observance of a moment of silence for the troops of Niger Republic who died in an operation against terrorists and over 100 persons from an attack on humanity. As we observe this moment of silence, let us also have in our thoughts the fallen heroes on our side of the border, Nigeria. Not to be left out are the innocent people that these depraved terrorists have targeted each time they are faced with the reality that the military of sovereign states shall always triumph over terrorists.

May God grant eternal rest to the departed gallant ones and give their relations the fortitude to bear the loss. As we stand with the people of Niger Republic as that nation marks a 3-day national mourning, let us be united in one prayers that evil no matter how long it takes can never overcome light.

The Boko Haram/Islamic State West Africa Province (ISWAP) may think they have done their worst through the attack on the troops leading to such casualty on the government side, but one is reassured that the soldiers inflicted an equally high casualty on the terrorists by killing 77 of them. All the lovers of humanity, those who abhor human suffering and the diminishing of the value of human live through acts of terrorism, see the attack as the continuation of the culture of cowardice for which the terrorists are well known. It is the strongest confirmation yet that the terrorists and their sponsors are scared stiff of the multinational alliance that has placed their ranks in disarray.

The Centre for Africa Liberation and Socio-Economic Rights (CALSER) sees the attack as the latest proof yet that there are foreign entities that have continued to support Boko Haram/ISWAP terrorists with not just logistics, medications, food and weapons but have increased their support to make the straggling remnants of the terrorists to be needlessly deadly. We fear that the foreign interests have now added training and supply of intelligence to the terrorists, which led these troops having to pay the supreme price.

For this we place the blame squarely on the United Nations for not doing enough to stop the subversive activities of countries that are sponsoring terrorists to destabilize Nigeria and the rest of Africa even now that they have lost control of the demons they created, which has resulted in countries other than Nigeria being attacked on such a massive scale. We call on the decision makers in the United Nations to remove their heads from the sand and stop playing the proverbial ostrich. The problem that geo-strategic interests of certain countries have created in the Lake Chad Basin has grown from being Nigeria’s headache to be a West African regional nightmare. It is a matter of time before it becomes the death knell of the world and humanity in general if the United Nations continues to be a slave to the political correctness that has prevented it from intervening being decisive in coordinating world action against terrorism in the region.

We call on those that are eager to drown West Africa in blood to heed lest they take the larger ember of the fire they are stoking to their bosom. Of particular note is France whose activities in the Lake Chad Basin have been geared towards ensuring ascendancy for the terrorists. That country has persistently been linked to the terrorists’ weapon acquisition and other material support that they enjoy. There have been instances where France has passed funds to the terrorists under the guise of paying ransom for its abducted nationals in clear violation of the position of respectable nations that do not negotiate with terrorists.

France sees nothing wrong with terrorist financing neither does it have qualms about the logistics it provided being used to kill the troops of a sovereign nation that happens to be its former colony.

In the face of the deliberate arms wringing and purposeful inaction on the part of the United Nations, we urge the authorities in Niger to bring the harshest repercussions yet upon the terrorists. They should be taught the lesson they have refused to learn that their being sociopath does not in any way lessen the value of the life of humans particularly those that have volunteered themselves in the service of their nation.

They should be dealt with in a way that they will refuse to lend themselves as merchant of death for immoral foreign interests.

The Republic of Niger should have also learnt it lessons now that allowing the terrorists to find safe haven in its territory after successive attacks on Nigeria is both a threat and danger to not only Nigeriens but the rest of Africa. The Boko Haram/ISWAP terrorists are akin to wild animal, at best feral species, that cannot be treated as domestic breeds. The death they dealt to others must now be visited on them with an intensity that will reassure the civilian population that they will be safe from the terrorists. Also, the gallant troops that died should not be allowed to have died in vain.

CALSER appeals to the Nigerian Military to prepare a befitting reception for the terrorists that will soon be attempting to escape the consequences of their indiscretion in killing the Nigerien troops. Any terrorist attempting to escape from Niger should be made to realize the mistake of their way as such murderers should arrive into hails of bullets. We must not allow them to have one hour of rest before being dispatched to the great beyond to answer for the sins they have committed against humanity.