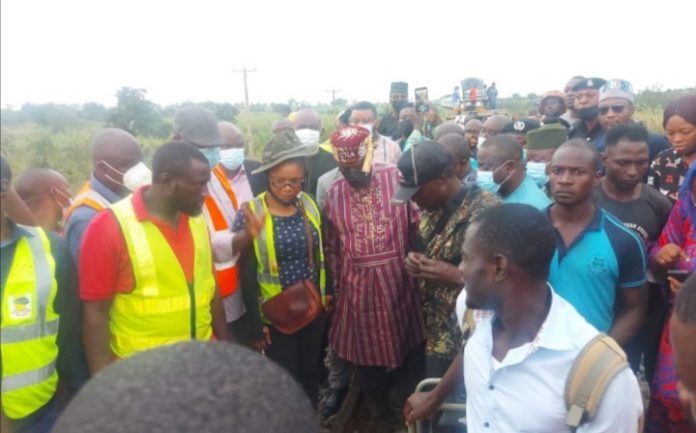 Minister of Transportation Chibuike Amaechi has reassured Nigerians that there would be improved security on the Abuja/Kaduna train route even as passenger service resumes Saturday.

The service was suspended by the Nigeria Railway Corporation (NRC) after a suspected terrorist attack on a train and tracks on Wednesday.

Amaechi who revealed plans to digitalize security on the nation’s railway facilities during an unscheduled assessment tour of the train service to ascertain the level of damage caused on the rail tracks after it was attacked with explosives.

He said, ” We want to assure the public that beyond the physical presence of Police and the Military along this track, we will get a rail bus for patrol regularly so that we can see what is happening even before the train takes off, and it will be end to end. Apart from this, there has not been any security challenges on this track. What this has done to us is that we would fasten the procurement process of the digital security system that we planned to put in place. It has gone to the Cabinet two weeks ago and it has returned. So, we’ll re-present it to Cabinet to ensure that we get approval for the installation.

“The essence of the digital security system is to enable us to know when there’s an impact on the rail to forestall this kind of attack. We will get the Police involved so that they will be here before the installation of the digital facility”he said.

The Minister said , though he may not be happy that the attack occured, fact has shown that Nigerian Engineers are now capable of constructing their own railway.

Hear him, “I am not happy that the security breach took place but what it has done is to show that we actually have the capacity to fix our rail . The essence of this is to make sure that by the time the Chinese leaves we should start the gradual process of constructing our own railway. The repair was done by our own Nigerian Engineers in record time and by tomorrow (Saturday) we will run the first train”, he said.

Speaking during the inspection, the Managing Director of the NRC, Fidet Okhiria insisted that it was better to run more trains as running more trains would not give people the opportunity to tamper/interfere with the tracts.

He disclosed that a train just passed from Abuja to kaduna not quite 30mins when the explosion were executed and planted.

“The people would have to work very hard to be able to plant explosives. I believe that when we restart we would start with eight trips when we come back tomorrow maybe tomorrow we may run four trips but Sunday eight trips because Sunday is a busy day. After fixing the locomotive that was affected, we would run our usual ten trips”.

“On safety, the Commissioner of police came here, the dss are now going to be fully involved. The minster spoke about inntroducing technology and we have an active responsive team that would respond to the information that would be provided by the technology”.

He disclosed that the organisation will not yield to the scare tactics by the bandits.

“NRC is a very responsible organisation. We are going to give them the option of reusing that ticket for a rescheduled trip. However there may be some pockets of cases where people are not regular customers or passengers on this route say someone from lagos and may not come back until after a year, we can’t ask the person to keep the ticket perpetually . If such people seek for refund, we go to the mobile process and refund it.”