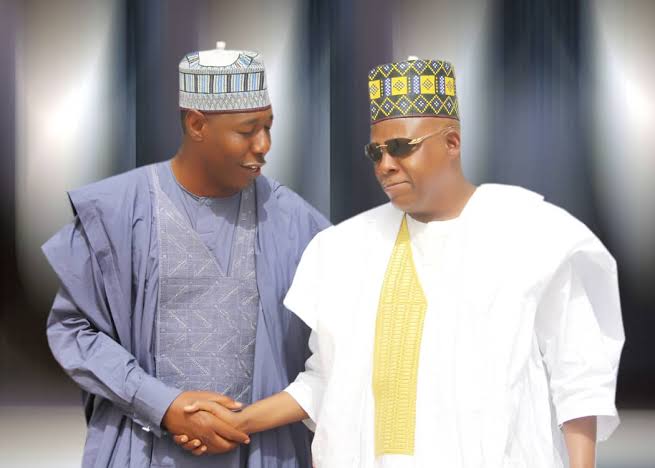 The Network of Buhari Supporters Worldwide (NBSW) has called on security agents to probe Governor Babagana Zulum of Borno State and his predecessor Kassim Shettima over violence in the state.

The group made this known at a press conference on Thursday in Lagos following President Muhammadu Buhari’s visit to Maiduguri.

It alleged that Zulum’s action may not be disconnected from the fact that President Buhari is aware of his treacherous promotion of conditions that encourages terrorist activities in his state.

According to the group, those involved “clearly lacked the capacity to discern right from wrong and were out up to it by those with interests”.

The NBSW, therefore, urged the leadership of the All Progressives Congress (APC) to investigate the role by its members who booed Mr. President during his visit to Maiduguri.

While urging for a thorough investigation into the incident, the pro-Buhari group urged the president not to be deterred.

The Network of Buhari Supporters Worldwide (BSNW) is disappointed that some Nigerians allowed themselves to be used in a failed attempt to embarrass President Muhammadu Buhari during his visit to Borno state.

The undignified act of booing the office and institution of the President of the Federal Republic of Nigeria clearly showed that those who took part in the show of shame clearly lacked the capacity to discern right from wrong and were out up to it by those with interests to protect.

It has now been verified that the booing of Mr President was ordered from high up by no less a person than the Borno state’s Governor, Babagana Umara Zulum, who knew beforehand that President Buhari was aware of his treacherous promotion of conditions that encouraged terrorist activities in his state. It is most unfortunate that Governor Zulum conveniently hid the nature of his dark activities behind series of populist actions to endear him to the very people whose murder he was facilitating.

We therefore call on the leadership of the All Progressives Congress (APC) to investigate the role by its members who booed Mr. President during his visit to Maiduguri irrespective of how highly placed they are in the national hierarchy.

We are demanding for such investigation because information at our disposal suggests that some persons who were not comfortable with the indictment of the state government and local leaders for the festering of terrorism had to put out the embarrassing show.

We urge Mr. President not to be deterred by the antics of such party men and women, who will for their own selfish motive go as far as trying to humiliate Mr. President who thought it wise to come in and pay a state condolence to the people.

In view of the recalcitrance on the part of these highly placed members of the state executive council, we hereby insist that nothing but the imposition of a state of emergency on Borno state will restore security to not just the state but the entire north east region. We demand full Presidential orders that will help address the insurgency in the state.

To the extent that the political leadership of Borno State has failed, there is only one more solution which is to remove terrorist supporting officials from office until such a time teventually returns to Borno State.