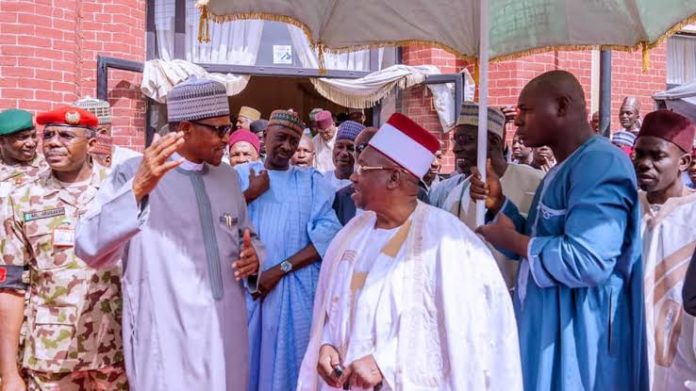 …. expresses confidence in military’s commitment to peace in Borno state

The North-East Network for Peace has lauded President Muhammadu Buhari for his prompt and compassionate visit to Maiduguri, Borno State on Tuesday.

According to the group, it is a testament of the president’s focus and unwavering commitment towards restoring lasting peace to the state and the entire region.

Speaking on behalf of the peace network at a press conference on Friday, President, Rev. Josiah Bitrus said they are impressed with the efforts so far in dislodging the Boko Haram/ISWAP terrorists from the various hideouts in North-East.

Although the group believes resurgence of attacks in Borno has coloration of insider influence, it expressed optimism that the military will eventually come out tops.

In the meantime, however, the North-East Network, called on President Buhari to declare a state of emergency in Borno State.

We welcome you all to the press conference put together by the North East Network for Peace, a non-governmental organization dedicated to the return of lasting peace in the North East region of Nigeria.

The importance of this press conference cannot be overemphasized given the efforts of the Nigerian Military in the theatre of operations in North-East Nigeria who have exhibited an unimaginable level of commitment to ending the Boko Haram menace.

This is cognizant of the commitment of the President and Commander-in-Chief of the Armed Forces of the Federal Republic of Nigeria that has indeed displayed an infectious commitment towards ending the Boko Haram insurgency in North-East Nigeria.

His recent visit to Maiduguri has shown once again that Mr. President has not reneged on his promise to free the entire country of terrorism but will continue to show the people of Borno State and the rest of the country the love and affection to pull through these difficult and challenging moments in the annals of the country.

The North East Network for Peace also wishes to applaud President Muhammadu Buhari for his courageous and fearless posture in speaking the truth no matter the situation. His commitment is unwavering and an indication that, in a matter of time, the menace of Boko Haram would come to an end.

The North East Network for Peace wishes to state that Boko Haram is still operating in Borno state is as a result of the connivance of the local authorities that are benefiting from the crisis. So, therefore, they must do everything to ensure that the activities of Boko Haram activities fester.

These groups of individuals are the very ones under whose care the commonwealth of the people have been vested upon, and they have abused it with careless abandon. They would continue to do everything possible to ensure that the war against terrorism continues so that they can continue to cover their tracks and perpetuate more evil.

The North East Network for Peace consequently wishes to state that the government must take drastic measures in Borno State if it’s desirous of entrenching peace and tranquility as the strategic importance of Borno state in the fight against Boko Haram terrorism cannot be overemphasized.

The North East Network for Peace also states that the resurgence of Boko Haram attacks in Borno State has every coloration of insider influence, just like the recent attack in Auno where scores of vehicles were burnt and scores of individuals killed by thugs suspected to be sponsored in an attempt to discredit the efforts of the Nigerian Military.

The North East Network for Peace is using this medium to call on President Muhammadu Buhari to once again exercise his unflinching love for the people of North East by declaring a State of Emergency in Borno State. This action would go a long way in restoring the peace and tranquility that has evaded Borno State, once regarded as the Home of Peace.

The North East Network for Peace pledges its support to the activities of the Nigerian Military and also appreciates the President and Commander-in-Chief of the Armed Forces of the Federal Republic of Nigeria.

We thank you all for attending this press conference, and we desire that very soon we shall come together again to celebrate the final decimation of the Boko Haram Terrorist group.