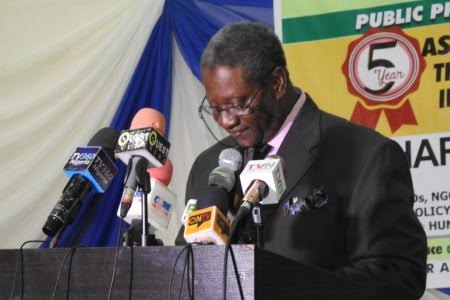 The President Muhammadu Buhari-led administration has demonstrated the will and capacity to end terrorism and all forms of violent crimes in Nigeria.

A former Director General of the National Institute of Policy and Strategic studies, NIPSS, Prof. Ahmed Danfulani who is the current Chancellor, Chartered Institute of Strategic Studies (CISS) said this while appraising the performance of the current administration in the last five years.

He said one area where it has indisputably done tremendously well and saved the lives of citizens is security.

The Professor, speaking in Abuja said the administration, though, has surpassed expectations in other areas like economy and fight against corruption, but said security is considered as central to the overall performance of an administration because it provides the base for other things like the formulation of policies and for planning as well as citizens wellbeing and infrastructural development.

He said an administration that knits it onions first and foremost sets out to secure the citizenry before any other thing as much cannot be achieved in an atmosphere of chaos and brigandage.

The former DG of NIPSS said the Buhari administration which came a time that the country was facing security challenges, did well to identify security as one of the cardinal challenges facing the country and quickly moved ahead to take drastic actions which has earned Nigeria respect and admiration from across the globe.

Said the Prof: “From day one, Buhari gave the service and other security chiefs in the country his agenda for the nation and gave them a marching order to move to the theatres of war.

“From that moment, the war on terrorism and insurgency in the country took a new dimension with Nigerian troops leading joint operations in the Lake Chad region as well ridding the home front of the activities of the terrorists.”

Danfulani said it is within this period that Boko Haram was technically defeated and their operations bases weakened to the extent that they no longer were able to carry out operations in the country but fled to other countries to sometimes attack soft targets.

He said many have tried to unravel the magic that Nigeria brought to bear to achieve this turnaround and pointed out that a lot has to do with the right leadership in the country and in the armed forces.

The Prof. explained that to have a clearer picture of what was brought to bear on the operations of the Nigeria military that is earning it positive results lately, the commitment of the country’s leadership to security had to be x-rayed.

The professor said the commitment of President Buhari to security can be categorised into three different phases to arrive at the conclusion that Nigeria is achieving results due to the right kind of leadership.

He said the three phases are, Buhari’s attitude to security while in the military, his efforts as a private citizen and his tactics as a president.

The Professor said even as a private citizen, the President involved himself in processes to secure the nation and was constantly reminding the then government to be more committed to securing the country untill an attempt was made on his life while driving in Kaduna.

Danfulani said it was the culmination of these efforts that came to bear when Buhari took over the mantle of leadership as president and provided the support and impetus for Nigerian troops to defeat the insurgents, recapture many seized Nigerian territories and set many communities free.

“Who would have thought that a time would come in Nigeria when we will spend a whole week, then later months and now years without a bomb going off in any part of the country.

“Who would have thought that schools, hospitals and markets in Bama, Monguno, Gwoza and many other terrorised towns would reopen?” he asked.

Prof. Danfulani maintained that those that doubted Boko Haram was defeated were shocked to hear that the success of the military has even gone beyond making the terrorists flee but that the Boko Haram leader is even looking for ways to surrender.

The academic added that the sucker punch came when the Boko Haram leader in an audio was heard weeping like a baby and pleading to Allah to intercede for them over what he called the wickedness of the Nigerian military.

“President Buhari, the chief of army staff and the troops in the field deserve a standing ovation for making the Boko Haram leader who is wont to talk tough all the time swallow his pride to cry for mercy.

“That is the height of the assurance needed by the citizens that the President through the armed forces has given priority to secure the lives of citizens and has succeeded in doing so,” he stated.

He noted that the war against insurgency and terrorism took a different dimension since March this year when the Chief of army staff moved to the theater of operation and vowed not to return untill the terrorists are defeated.

“You can see that within a month, more than 500 of the insurgents have been killed, their weapons seized and their informants arrested.

“They have been reduced to a rag tag army clutching at straws in the most pitiable and uncoordinated manner.

“The Nigerian military is serious about bringing Boko Haram activities to an end and very soon people would see that some of the things achieved can only through a dedicated leadership with purpose that we currently have,” he stated.