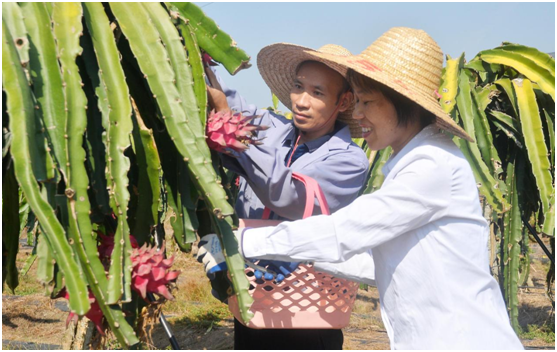 By Zhou Zhou, People’s Daily
In the office of Ahmed Bahaa El-Din Shaaban, secretary-general of the Egyptian Socialist Party (ESP), a porcelain vase dotted with peach blossoms and carps was quite eye-catching.
“This was a gift I received from the comrades of the Communist Party of China (CPC) when I firstly visited China in 2017. I cherish it very much. The porcelain vase, which carries strong Chinese cultural features, reminds me of the good time I spent in China,” Shaaban told People’s Daily.
He said CPC cadres are very professional, open and inclusive, which left a deep impression on him.
Shaaban has long been interested in China. He has many books introducing China in Arabic at home, including those about Mao Zedong Thought, the development of the People’s Republic of China and the CPC, and Chinese culture. Through these books, Shaaban has obtained massive information about China’s development.
“I always observe China’s development with admiration. China has a long history and has paved a development path that suits itself through reform and opening up,” he said, adding that the country has proved with concrete actions that a country must make a development path that suits its national conditions in order to drive social progress and achieve prosperity.
The ESP secretary-general noted China has achieved glorious accomplishments in economic, social and livelihood development, and he is proud of China’s prosperity and progress.
He said the simple, safe and wonderful Winter Olympics hosted in Beijing earlier this year amid COVID-19 demonstrated China’s remarkable strength.
“Under the strong leadership of the CPC Central Committee with Comrade Xi Jinping at the core, China is marching forward confidently,” Shaaban told People’s Daily.
He attributed China’s stable and healthy economic and social development, and the changes of people’s life to the active practices of the CPC.
In the fight against COVID-19, the CPC takes a people-centered approach to protect people’s lives and health to the fullest extent, he said.
Xi Jinping, general secretaryof the CPC Central Committee, always bearing in mind the impoverished regions and the people there, has taken poverty reduction as an important task of national governance, he said, adding Xi has led the CPC to fulfill its commitment of eradicating absolute poverty as scheduled.
“China’s progress is the world’s progress,” Shaaban remarked. He said Xi has provided a series of global public goods and cooperation platforms, including the vision of building a community with a shared future for mankind, the Global Development Initiative and the Global Security Initiative, to promote global solidarity and win-win cooperation.
China sincerely shares its development experiences with the rest of the world and its development benefits the rest of the world, Shaaban said.
In 2017, he attended the CPC in Dialogue with World Political Parties High-Level Meeting hosted by the International Department of the CPC Central Committee in China, where he listened to a keynote speech delivered by Xi.
“Xi, humble and always caring for the people, is a leader with great visions and noble characters,” Shaaban said.
He told People’s Daily that Xi’s remarks made at the meeting, such as “Political parties play an important role in the political life of our countries and progress of human civilization,” are still inspiring for him today.
In July 2021, the ESP attended the CPC and World Political Parties Summit via video link. When Xi was delivering a keynote speech, Shaaban took pages of notes.
“What impressed me the most was that Xi associated political parties’ responsibilities with ensuring the people’s wellbeing and pursuing the progress of mankind, advocated building a community with a shared future for mankind and stressed promoting coordination and cooperation among countries. This reflected the CPC’s courage to shoulder historical responsibilities and make development fruits shared by more people in a fairer way,” Shaaban remarked.
Shaaban said the CPC carries a mission to seek happiness for the Chinese people and seek progress for humanity, and has contributed important plans to coping with global challenges, which sets a good example for global political parties in joining national construction and development.
“We will keep deepening our solidarity and cooperation with the CPC, to jointly oppose hegemonism and power politics, carry forward the common values of humanity, safeguard international peace and justice, and promote common development,” Shaaban noted.